Ever since I became interested in prion diseases, I’ve heard quinacrine bandied about as the drug of yesteryear, once deemed promising but then found useless in clinical trials.  As I got deeper into the prion literature, I was surprised to find that, despite its apparent failure in treating the human disease, quinacrine is still quite often used in research.  The prion labs at UCSF and University of Alberta both continue to use quinacrine as a benchmark or positive control in their high-throughput assays [see Poncet-Montagne 2011 and Mays 2012 respectively].  So I wondered, what’s the deal, does quinacrine work or not?  And if not, why are people still using it?

There’s a huge body of literature on quinacrine and prion diseases, more than I have time to wade through thoroughly, but after reading some of it, the rough picture that has emerged is that quinacrine does work in vitro, but not in vivo.

A quick introduction.  Quinacrine (shown below) is a tricyclic compound (note the three rings), specifically a heterocyclic (the middle ring has one nitrogen, making it not-quite-benzene).   It’s 80 years old, making it one of Western medicine’s older drugs.  It began its life as an antimalarial, was used more broadly as an antiprotozoal, and it’s been investigated for a host of other purposes, but has generally fallen from favor — so much so that Drugs.com states it is “not commercially available in the U.S. and Canada” and Drugstore.com has no hits.  If you’ve spent time in the tropics, you were probably at some point advised to take mefloquine (Lariam), quinacrine’s successor in the antimalarial realm.  Like Lariam, quinacrine has the rare-but-nasty side effect of psychosis: “Toxic psychosis due to quinacrine treatment represents an infrequent, but serious psychiatric complication” [Lindenmayer & Vargas 1981]. 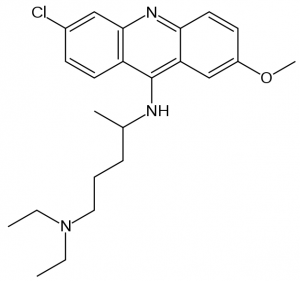 The earliest evidence of quinacrine’s antiprion properties seems to have come from Doh-Ura 2000 and Korth 2001 (latter of the Prusiner group at UCSF).  Both of these studies digested scrapie-infected mouse neuroblastoma cell lysates with proteinase K and then immunoblotted to detect PrP.   In other words, what they measured was the amount of proteinase K-resistant PrP (PrP-res) remaining in the cells after treatment with quinacrine.  Both studies found virtually complete clearance of PrP-res using high enough doses of quinacrine: see Doh-Ura Figure 1 (left) and Korth Figure 2 (right): 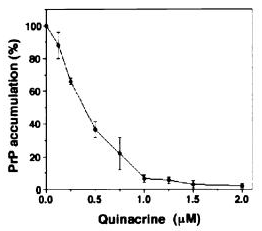 Because quinacrine was already a long-approved drug relatively well-tolerated in humans (psychosis is a side effect in only 0.5% of peopel according to Korth), this generated a lot of hope that quinacrine could be rapidly advanced to clinical use.

And advance it did.  Just four days after Prusiner’s group published the Korth paper, it announced that it was treating two CJD patients at UCSF with quinacrine under compassionate use [Love 2001].  By 2005, quinacrine had advanced to PRION-1, the first clinical trial of a drug for prion disease.

That it did so is perhaps a sign of how desperate people were for some sort of treatment: quinacrine had already failed in all three mouse studies and all three human studies published prior to 2005.

Collins 2002 found no effect of quinacrine in a mouse model.  Collins used mice intracerebrally infected with “mouse-adapted CJD” (exact prion strain not stated) treated with 10 mg/kg quinacrine in water from 5 dpi or 65 dpi.  The mean survival for control and both treatment groups was identical at 140 dpi.  Barret 2003 tested quinacrine against PrP-res accumulation in spleens of scrapie-infected mice, with no success.  Doh-Ura 2004, the study famous for demonstrating a very strong in vivo effect of pentosan polysulfate, also tested the effects of quinacrine in mice via intraventricular infusion (i.e. dripping the drug continuously into the ventricles) and found that quinacrine had no effect.

The human results were equally disappointing.  Furukawa 2002 reported on the use of quinacrine in a clinical trial for CJD in Japan: “In some patients, response to visual and auditory stimulations improved transiently.”  Nakajima 2004 had similarly ambiguous results in four Japanese patients.  Benito-Leon 2004 reported on the treatment of two FFI patients in Spain with combined quinacrine (100-200mg, 3x/day) and chlorpromazine (75-600mg, 3x/day).  Neither patient exhibited any improvement upon administration of these drugs.  One patient also had a psychotic adverse reaction to the initial high dose of quinacrine.  Haik 2004 reported no success with quinacrine in 32 compassionate use CJD patients in France.

Quinacrine at a dose of 300 mg per day was reasonably tolerated but did not significantly affect the clinical course of prion diseases in this observational study.

While not surprising in light of earlier reports from mice and humans, this result does need some explanation.  If quinacrine is so effective in vitro that it’s still used as a positive control today, why doesn’t it work in vivo?

Yung 2004 found that quinacrine does pass the blood-brain barrier, but noted that this is no guarantee it gets to the right place in the right form:

The documented extensive brain tissue penetration is encouraging suggesting quinacrine might be useful in the treatment of prion disease. However, further clarification of the distribution of both intracellular and extracellular unbound quinacrine is needed. The relative importance of free quinacrine in these compartments upon the conversion of normal host prion protein (PrPC) to PrPSc will be critical toward its potential benefit.

The following year, Gayrard 2005 followed up on this line of thought, showing that quinacrine did not delay the disease in scrapie-infected sheep and presenting a variety evidence from the sheep as well as N2a cell culture experiments to show where (extracellular, cytosol, lysosomes, etc.) and in what phase (free or bound) quinacrine accumulates.   Gayrard found low concentrations of quinacrine in the cerebrospinal fluid, but found that this did not indicate poor blood brain barrier penetration, as quinacrine concentrations in brain tissue were about 1000x that in the CSF.  Gayrard found that, in brain tissue, quinacrine accumulates predominantly in lysosomes, with much lower concentrations in the cytosol and extracellular matrix.  Even with toxic doses of quinacrine, the concentrations used in Korth and Doh-Ura’s experiments could never be achieved in the cytosol or extracellularly in vivo.  That said, some evidence pointed to the idea that lysosomes are the right place to be inhibiting prion formation.  Gayrard offered that if endolysosomal free concentration of quinacrine is in fact the relevant figure, then the in vitro concentration is indeed achieved in vivo with therapeutic doses, so a different explanation for lack of in vivo efficacy is needed.  Gayrard points to Barret 2003 who showed that quinacrine can prevent but not reverse PrP-res formation.

Following up on that line of thought, Ghaemmaghami 2009, of the Prusiner lab, showed that long-term treatment of mice with quinacrine resulted in only a transient reduction in PrP-res levels.  Because quinacrine levels in the brain tissue remained high after the reduction in PrP-res was gone, Ghaemmaghami’s interpretation was that this is essentially a drug resistance phenomenon.  Only a subset of prions are vulnerable to quinacrine and after they are cleared out, the quinacrine-resistant conformations continue to multiply.  Evidence of structural change and the ability to select for quinacrine-resistant prions in vitro support this hypothesis:

The following two observations are consistent with this hypothesis. First, we observed that PrPSc accumulating in the brains of chronically treated mice had a lower conformational stability compared to that of untreated controls, suggesting that quinacrine induced a structural change within the prion population. Second, we were able to induce the formation of quinacrine-resistant prions in cell culture, indicating that drug resistance can be induced outside the context of the central nervous system.

So far, then, I’ve found two hypotheses for why quinacrine doesn’t work in vivo: (1) it accumulates in the wrong places [Gayrard 2005] and/or (2) it doesn’t clear out all prions, only some conformations, so it simply creates a quinacrine-resistant population of prions [Ghaemmaghami 2009].

A third possibility, not widely discussed in the literature, is that measuring PrP-res simply isn’t a good enough proxy for measuring infectivity or toxicity of prions.  All of the above studies used proteinase K digestion followed by immunoblotting as the way to determine whether PrP-res was present, and some of the studies even called this “PrPSc” even though really what is being measured is PrP-res.  PrP-res is strongly correlated with prion disease but that doesn’t mean causation, and some prion diseases produce much less PrP-res than others — FFI produces relatively little [Jackson 2009] and the new so-called VPSPr produces variable amounts, with almost no proteinase-K resistance in the 129VV genotypes [Zou 2010].  Indeed, Zou introduces a new vocabulary term, PrPDis, indicating disease-associated PrP, i.e., not necessarily PrP-res.  Perhaps this is the language we need to discuss prion disease going forward.  While I remain hopeful that the screens from UCSF and University of Alberta will lead eventually to successful drugs, the development of new assay readouts that do not rely on proteinase K digestion would certainly be valuable, especially for the less proteinase K-resistant diseases like FFI.