This report from earlier this year, out of the Groschup lab at Germany’s Friedrich-Loeffler-Institut, shows therapeutic effects in cell culture and in prion-infected mice using a medicinal herb, Scutellaria lateriflora (shown below), otherwise known as Skullcap. 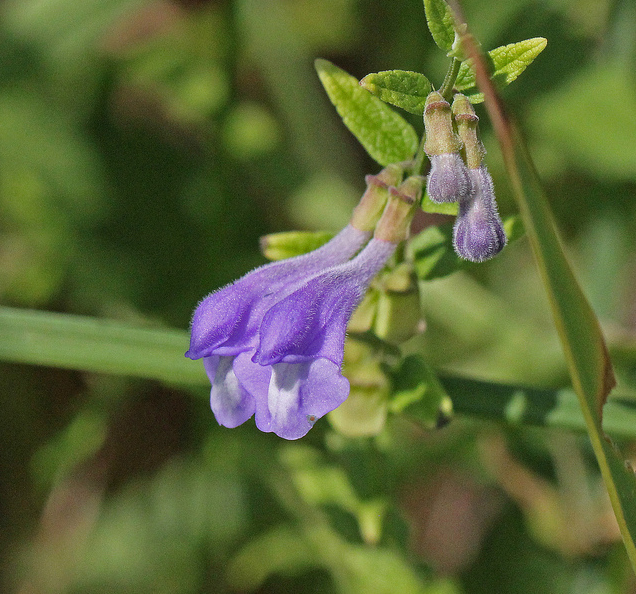 The study used two different cell culture models: ScN2a cells (mouse neuroblastoma cells exposed to RML prions) and “SMB” (scrapie mouse brain) cells infected with 22F prions. The authors don’t say anything more about the latter — are these actual brain slices from prion mice, or cell lines derived from prion mice?  The authors treated different groups of cells with a skullcap extract as well as with two isolated compounds found in skullcap —  baicalein and baicalin, the latter being just the former plus a glucuronide.  As in many other studies, PrP-res was used as a proxy for disease-causing prions.  The extract and both isolated compounds all showed antiprion action in vitro — baicalein much moreso than baicalin.  But the authors do not make any claim that baicalein is therefore the active ingredient; instead they proceed to in vivo studies using the whole tea extract.

They did two in vivo experiments, one with intracerebrally infected mice, and one with intraperitoneally infected mice.  In both cases, RML prions were used and the mouse background was C57/B16.  The Scutellaria lateriflora tea was brewed at 30 g per liter, infused for half an hour in boiling water and replaced the mice’s drinking water.  The sample sizes were small (n = 6 in each control group and in each treatment group) but the results acheived statistical significance nonetheless:

Baicalein has also been invested for Parkinson’s and Alzheimer’s and is known to cross the blood brain barrier.  Baicalin doesn’t cross the BBB, but appears to get enzymatically cleaved in the gut anyway, yielding baicalein.   The authors posit a direct interference of baicalein with PrP, inhibiting the conversion to disease isoform, and also possibly an antioxidant effect as a secondary mechanism of action.

One question I’m left with is, how did they come up with the idea to use this traditional herb for prion disease?  The wiki on Scutellaria lateriflora currently states that it’s used as a sedative, but this sentence bears that ever-present disclaimer, citation needed.  Alvita’s skullcap tea product page on Amazon promises that it “relaxes nervous tension, induces calm and counteracts sleeplessness”.  Scutellaria lateriflora is also a close relative of 黄芩 (huangqin), an herb used in Chinese medicine for respiratory infections and GI inflammation.  (Aside: huangqin aka Scutellaria baicalensis is native to Lake Baikal, presumably the namesake of baicalin).

On first glance I was a bit troubled that the variance is so much higher in the treatment than control group for the intracerebrally infected mice.  But the statistical test used was log-rank, which does not assume equal variance in the two groups (as opposed to, say, a t test, which does assume equal variance).  I eyeballed the data from Figure 3 and re-ran the test in R following this tutorial, finding p = .0029:

And of course the effect size (25%) is among the best I’ve seen in any mouse studies of prion therapeutics.  And for the intraperitoneally infected mice, the effect size is more modest (8%) but still pretty significant.  This study is exciting news, and I look forward to seeing if the result validates in other mouse models.