For the past ten years, a few scientists, led chiefly by Dr. Thomas Wisniewski of NYU, have been working to develop a vaccine against prion infection. As the group points out in one of its papers, “the creation of vaccines is one of the greatest successes of medical and veterinary science”– so why not apply this approach to fighting prions?

Traditionally, a vaccine would consist of an inactivated or less virulent version of a pathogen which allows your body to “learn” how to fight the real live pathogen.  What that means at the molecular level is that the vaccine preparation contains the same surface protein(s)—or at least, surface proteins with the same epitope—as the true pathogen, so that your B cells can develop a immunoglobulin (Ig), aka antibodies, with the paratope to the true pathogen’s epitope.  To “discover” the right paratope against an antigen, the immune system uses its own form of high-throughput screening: the paratope of immunoglobulin is a mutation hotspot in genomic DNA, so when immune cells proliferate, they produce a huge number of different peptide sequences in that crucial region.  After the infection is beaten back, the B cells with the winning paratope can stick around as memory B cells and produce the antibody for years or decades in case you get infected again.  A booster shot may help them stick around longer.

As a target for a vaccine, though, PrP is a bit unusual.  Here are three obvious concerns:

I’ll start by ruining the ending by answering these three questions.
Along with a few reviews and discussion papers, the Wisniewski group has published three major advances on the subject of anti-PrP vaccines, mostly focused on question #1: how to get the host to mount enough of an immune response to stave off prion infection.
In the first paper, Sigurdsson 2002, the group used purified recombinant PrP as the vaccine.  In other words, they introduced the whole (mouse) PrP open reading frame (exon 1, intron 1, exon 2) into E. coli, cultured the bacteria to produce PrP, and then purified the PrP using methods described by Wong 1999 and Brown 1999.  They then injected this PrP into mice subcutaneously, along with an adjuvant.  An adjuvant is something you mix an antigen with to make a better vaccine–for instance, the aluminum hydroxide in vaccines such as the TDAP vaccine  works in a couple of ways: it keeps the proteins in solution during shipping, exposes them to the immune system gradually over time, and also causes irritation that recruits more immune cells to the injection site.  Sigurdsson used Complete Freund’s Adjuvant, which consists of a mineral oil emulsion and dead tuberculosis bacteria.
Sure enough, mice responded to the recPrP + adjuvant by producing anti-PrP antibodies.  Sigurdsson produced a few different test groups: a prophylactically vaccinated group of mice received seven vaccinations over 14 weeks before being challenged with scrapie, while another “rescue” group didn’t receive the vaccination until after becoming infected with scrapie.  The mice were all-female CD-1 mice, a more vigorous outbred variety in contrast with the inbred strains discussed in this recent post, and the prions used for the challenge were 139A prions.  Sigurdsson also wanted to test the differential effects of different scrapie titers — 10 and 1000-fold dilutions of 139A brain homogenate — and of different levels of immune response observed in the different mice, as measured by the titer of anti-recPrP antibodies in the mice’s blood.
So in the end there were several groups:

So the immunization did something. For three of the comparison groups, the effect sizes were small but statistically significant. The authors also noted that within some of the groups, the anti-recPrP antibody titer correlated significantly with age of disease onset.

This study showed that an immune response against PrP was possible and (at least in an intraperitoneally infected model) beneficial. The question was how to get a stronger response.

By 2005, the group had made some progress on this question [Goni 2005].  They came back with a vaccine consisting of live Salmonella typhimurium expressing recPrP, instead of purified recPrP, and administered the vaccine orally, thus aiming specifically for a mucosal immune response that would vaccinate the mice against oral infection with scrapie.  This version of the vaccine was administered prophylactically three times before the mice were exposed orally to 139A prions (if the time of first vaccination is defined as 0 days, the subsequent vaccinations were at days 7 and 28 and the infection was on day 49).
And it worked.  The vaccinated mice lived significantly longer, with 30% of them apparently never getting sick, at least as of 500 days post-infection.  500 days is a long time– if you’ve read the other mouse studies on this blog you know that scrapie-infected mice almost always die within 200 days or so.  The survival curves are shown in Figure 2 (PrPx1 and PrPx2 are groups of mice that received two different versions of the vaccine, with the Salmonella expressing either 1 or 2 copies of MoPrP respectively. Survival longer than controls p=.0015 and .0004 respectively by log rank test.): 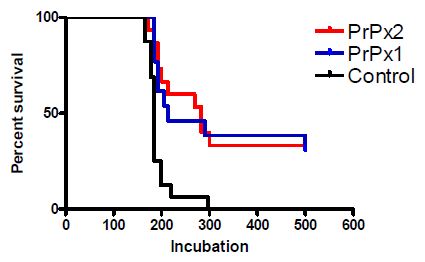 Looking at that graph,  you’ll notice that some of the mice got sick and died just about as soon as the control mice did; the significant difference is really driven by the ~30% of mice that just never got sick.

The researchers measured IgA and IgG levels in the mice.  IgA, a mucosal antibody, represents about 75% of all immunoglobulins in the body and is localized in large part to the digestive tract.  IgG is more of a systemic antibody, found in the serum and thus throughout the body.  The Salmonella-based vaccine was targeted specifically at mucosal immunity, but nonetheless, the researchers found significantly higher-than-control levels of anti-PrP IgA and IgG in the vaccinated mice after the vaccination course (Figs 4 & 5).  (Interestingly, when tested again after the infection, the non-vaccinated mice also had some level of these antibodies, indicating there is at least some degree of immune response to oral prion infection itself).

And, just as Sigurdsson 2002 had observed, the titer of anti-PrP antibodies was significantly correlated with the mice’s survival: 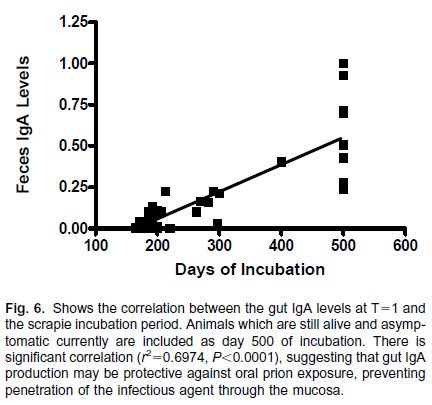 The group’s next (and to date latest) publication on on prion vaccines [Goni 2008] took a more aggressive vaccination protocol.  The PrPx2 Salmonella vaccine was administered to mice orally four times with live Salmonella and then twice more with dead Salmonella as a booster.  Then before infection with scrapie the mice were divided into four groups according to how they responded to the vaccine: all permutations of high vs. low IgA and IgG levels, with 10 – 14 mice per group.  They compared these mice to two control groups: mice not vaccinated, and mice that were “vaccinated” with Salmonella modified with an empty vector with no PrP.  The control groups were not significantly different in survival so they were combined into one control group with n = 20.

Here are the results:

Post-mortem histology showed no evidence of autoimmunity: “there were no signs of organ inflammation or other toxicity that could be associated with vaccination or autoimmunity evident by histological analysis (data not shown)”.

This work shows that anti-PrP vaccination can bring about complete abrogation of prion infection in mice, as long as the animals respond to vaccination by creating enough antibodies.

It is interesting that IgA and IgG appear to both play a role in the immune response to the Wisniewski lab’s vaccines.  When you first hear of the idea of an anti-prion vaccine, you might imagine that this would be a mucosal vaccine bringing about mucosal immunity, where only IgA is important and it works by targeting ingested PrP and/or depleting your gut of PrP so that prion infection cannot take hold.  Such a vaccine would be expected to only work against oral routes of prion infection (e.g. BSE, CWD) and not against sporadic or genetic forms of prion disease.

But the Wisniewski group’s results suggest the possibility that some degree of humoral—i.e. systemic, throughout bodily fluids—immunity can be attained and can be helpful in fighting off prion infection.  At first glance this seems unlikely: will antibodies really get into the brain, and if they do, will they be so well-behaved as to target misfolded proteins but not kill the neurons that produce them?  Yet this is the whole premise on which Alzheimer’s vaccines are based.  Immunotherapy for Alzheimer’s has been an active area of research for over a decade (for a review see Wisniewski 2008), with one anti-Aβ vaccine, AN1792, having made it to Phase II clinical trials.  AN1792 showed modest cognitive improvements and large reductions in Aβ deposits but the trial was discontinued due to an adverse reaction in 6% of patients, who developed meningoencephalitis (inflammation of the meninges and brain, presumably due to an autoimmune reaction).

To be sure, the Wisniewski group are not the only ones working on immunotherapies for prion disease, and there is considerable debate over the potential for therapeutic value versus autoimmune toxicity and what is the right approach to take.  Heppner 2001 showed some success with mice expressing transgenic anti-PrP antibodies, presumably suggesting the possibility of passive immunization (i.e. providing the antibodies directly rather than vaccination to induce antibody production).  But Lefebvre-Roque 2007 reports a severe toxic reaction to passive immunization in mice, and Donofrio 2005 discusses the neurotoxic properties of cross-linking PrPC by bivalent antibodies.  Collinge has been a proponent of an immunotherapy approach to prion diseases, and such is listed as a major research area of the MRC Prion Unit, though the approach has not always been successful (no delay in scrapie onset after vaccination in Tayebi 2008). For a bit more discussion see Aguzzi 2004 under “Immunotherapy for prions?” and reviews by Wisniewski & Goni 2010 and Wisniewski & Goni 2012.

While the science is far from perfected at this point, it now looks conceivable that vaccines could actually induce the immune system to fight off host-encoded proteins such as PrP in the brain and thus be effective even in sporadic or genetic forms of prion disease.  While not all mice in the Goni 2008 study showed a strong vaccine response, the complete protection against prion disease among mice that did have a strong response points to the therapeutic potential of vaccination and the merits of testing this approach in other mouse models of prion disease.