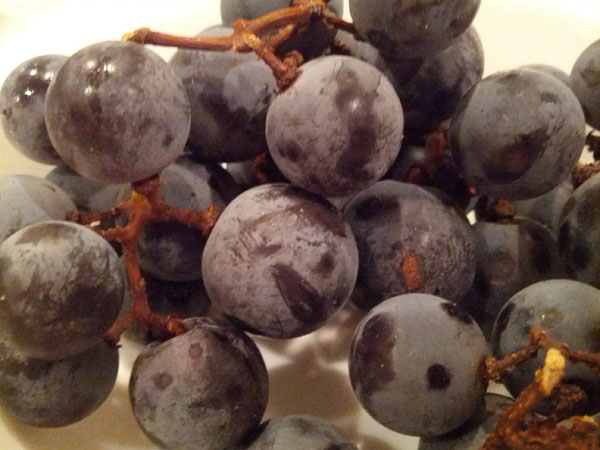 Sang-Youel Park’s group at Chonbuk National University in Korea published two papers this year on the possibility of resveratrol as a therapeutic for prion diseases.

If you haven’t heard of resveratrol (shown above) by name, you still probably know it as “the thing in red wine that supposedly makes you live longer.”  Resveratrol, and the sirtuin genes (especially SIRT1) that it activates have been the subject of an unbelievable amount of hype that culminated most famously in Harvard professor David Sinclair selling his sirtuin-focused pharma startup, Sirtris, to GlaxoSmithKline for $720 million (see this recent update on the saga from xconomy).

Resveratrol is produced naturally by several plant species as an antimicrobial, and is found in grape skins among other things: hence the thematic photo at the top of this post.  But that’s there purely to have a nice picture to show; the doses used in animal studies of resveratrol have always been far beyond what you’d get from your diet (see example in Reagan-Shaw 2008), so if resveratrol does prove to be more than hype, you’ll be taking it in a pill, not in a wine glass.

While reseveratrol has been in the news for a few years, these two studies are to my knowledge the first to look at resveratrol as a potential antiprion agent.  The first study, Seo 2012, used human neuroblastoma cells challenged with synthetic PrP 106-126 as a model.  So right away you have a big disclaimer: this study didn’t use actual prions.  But that being said, Seo used an impressive battery of different experiments to show that resveratrol inhibits cell death via SIRT1 activation after the cells are challenged with PrP 106-126.  Here are a few of the logical steps:

So all this tells a simple story: resveratrol > more SIRT1 activity > less cell death.  The title of the article, “SIRT1, a histone deacetylase, regulates prion protein-induced neuronal cell death”, points to the authors’ confidence at the time that deacetylase activity was indeed SIRT1′s mechanism of action.

However, the second resveratrol paper by this group, Jeong 2012, steps away from the claim about deacetylation, instead declaring autophagy as the mechanism of action, stating confidently that “Resveratrol prevented PrP(106-126)-induced neuronal cell death by activating autophagy.”  In fact, in this second paper it is not even clear that SIRT1 is supposed to be the route to autophagy: SIRT1 is not mentioned except in reference to the previous paper.  Jeong found that resveratrol appeared to help maintain mitochondrial homeostasis, reducing levels of JC-1 monomers (a marker of mitochondrial apoptosis signaling), and that it increased levels of LC3-II (a marker of autophagy).  Treating the cells with autophagy inhibitors (3-MA, Bafilomycin A1, and Wortmannin) reduced the protective effect of resveratrol.

There is plenty of other literature out there suggesting that resveratrol induces autophagy (see for instance Gurusamy 2009, Morselli 2011 and Filippi-Chiela 2011 – there are dozens of others, just Google “resveratrol autophagy”), possibly via a mechanism separate from SIRT1, depending on who you ask.

As for the relevance of all this to the search for prion therapeutics, it’s fairly interesting.  Mastrianni’s experiments with rapamycin in GSS mice have already shown that autophagy can lead to a delay prion disease onset in vivo, so it’s believable that resveratrol could work too.  And if its side effects were more benign than rapamycin, that would be exciting.  But while resveratrol is eminently available as a supplement today, the fact that it hasn’t really been druggified yet means we don’t have a lot of solid data on the effects of chronic use.  In any case, the fact that it reduces cell death in a PrP 106-126 model is still a long ways from convincing me that resveratrol would have any antiprion effect in vivo.  Resveratrol wouldn’t be my personal top choice to test in a mouse model, but I wager someone will try it in scrapie mice within a couple of years, and I’ll be quite interested to see the outcome.