Electroconvulsive therapy (ECT) is the practice of applying current through electrodes on a patient’s head to induce a seizure.  While the details vary (use of other medications along with ECT, placement of electrodes on one versus both sides of the head, waveform of the electric current), the idea is the same: inducing seizures for a mental health therapeutic benefit.

This practice has had a sinister image in the public eye ever since One Flew Over the Cuckoo’s Nest portrayed it as a tool of domination over hapless mental institution inmates:

But in fact, ECT is still widely used as a treatment for schizophrenia, bipolar disorder and major depression.  Unlike the portrayal in the video, today it’s normally done with anesthesia and muscle relaxants (this is called “modified ECT”) – and with the patient’s consent.  Many psychiatrists believe it’s still the best treatment available for these disorders, or at least for patients who haven’t responded to medication.  But even among mental health practitioners, ECT is certainly controversial.  In particular, there’s controversy over its cognitive side effects – memory loss (both retrograde and anterograde, i.e. forgetting stuff that happened both before and after the ECT) and long-term cognitive decline.  For a taste of some of the debate in the field, read the Adverse effects section on Wikipedia.

It is possible to find reviews in the literature (e.g. Andrade 2008) that claim we understand a lot about the molecular mechanisms of ECT – both its antidepressant effects and its cognitive side effects.  But the folks who’ve edited the Wikipedia page, at least, seem to think we still understand relatively little.

The reason I’m writing about this on CureFFI.org is that there are a couple of case reports in the literature about prion disease patients who declined rapidly upon ECT administration.  This could just be coincidence, but this post will engage in pure speculation on the interesting subject of whether ECT might accelerate prion propagation or toxicity, and if so, by what mechanism.  Take it all with a grain of salt: this is not peer-reviewed science here, and the truth about all this is, we don’t know.

One of the case reports, Grande 2011, describes a patient who first received a diagnosis of depression.  Antidepressants seemed to have no effect, and the patient returned with even more severe depression plus “reduced speech output and psychomotor retardation with pseudocatatonic postures”, resulting in an admission to the psychiatric ward of the hospital.  After more drugs were tried and failed, the patient received eight bilateral ECT treatments over 25 days, over the course of which she seems to have declined quite dramatically:

she progressively became disoriented, inattentive, perseverative, and her speech turned to be hypophonic, monotonous, with a paucity of content and difficulties in naming and understanding complex orders. She developed rigidity, postural tremor, bradykinesia, gait disturbances, and became wheelchair bound.

At that point, the doctors stopped ECT and did another battery of tests, finally coming back with a diagnosis of CJD.  The patient’s condition continued to decline rapidly, and soon she was discharged to a nursing home.  But surprisingly, one month later, she had improved, it sounds like to about the state she’d been before ECT, maybe a bit better:

She was oriented and able to maintain a simple conversation and walk by herself. Nevertheless, cognitive and depressive complains persisted and she referred lacunar amnesia of the previous 6 months. Neurological examination showed symmetric akinetic parkinsonism, reduced fluency, word-finding, difficulties, and ideomotor apraxia.

The only other case report of ECT in prion disease patients is Jiang 1999, who describes a patient diagnosed with depression, with no abnormal neurological signs, who:

was subsequently admitted to a psychiatric hospital (Sheppard Pratt Hospital, Baltimore) where she had electroconvulsive therapy.  When psychiatric treatment failed, and confusion, disorientation, memory loss, myoclonic jerks, ataxia, and seizures developed, the patient was transferred to GBMC for evaluation…

Whereupon MRI and EEG were both abnormal and CSF tested positive for 14-3-3 protein, a marker elevated during prion infection which (to this day) is used as the main diagnostic tool for prion disease.

This paper is quite brief and really leaves me wondering about the chronological order of things.  Did the “confusion, disorientation, memory loss, myoclonic jerks, ataxia and seizures” develop over the course of a few weeks while ECT was being administered? Or after ECT had already been stopped for lack of efficacy?

Because if this decline presented over a few weeks of ECT treatment, then this seems much the same story as in Grande 2011.  And supposing that there were two examples of patients who experienced rapid prion disease progression during ECT, is there any plausible molecular mechanism which could account for that?

One interesting possibility is oxidative stress.  Meaning: the oxidation of lipids and proteins in cells.  It seems pretty accepted that prion diseases cause oxidative stress (see for instance the post about Coenzyme Q).  The converse notion – that oxidative stress can act as a trigger for prion disease – seems eminently plausible as well, and the claim has even been made that ”prion disease results from loss of antioxidant defence” [Brown 2005], though I’m not clear on how well this is established at this point.  Google Scholar finds a plethora of recent papers at the intersection of prions and oxidative stress, but to my knowledge none have yet painted a convincing and widely accepted full picture (leave a comment to let me know if I’m wrong).

Within the oxidative stress corner of the prion research field, there is a particular bit of interest in a class of enzymes called superoxide dismutases.  Superoxide is O2−, among the most toxic oxidative species in biology.  Your immune system produces it in order to kill microbes and your cells produce superoxide dismutases to neutralize the superoxide and contain the damage to your own cells.  Humans have three superoxide dismutases which localize differently and make use of different metal ions at the O2− binding site: SOD1 lives in the cytosol and uses copper and zinc, SOD2 lives in mitochondria and uses manganese, and SOD3 is extracellular and uses copper and zinc.  Mutations in SOD1 are one common, genetically dominant, cause of familial ALS.  This form of ALS involves elevated oxidative stress although it’s believed that the cause of the disease is more complicated than just a loss of antioxidant activity and also involves some gain of function.

The prion field has enjoyed a lively debate ever since David Brown first proposed that PrPC‘s native function includes superoxide dismutase-like activity [Brown 1999].  Brown and many other investigators use an assay based on nitro blue tetrazolium (NBT), which turns blue when it encounters superoxide [Choi 2006].  So you can introduce superoxide into cell culture or a cell-free medium and then measure the activity of superoxide dismutase by seeing whether NBT shows up blue.  Brown showed that purified PrPC in a cell-free environment was able to eliminate superoxide, as measured by this assay, just like SOD does.  Brown had earlier shown that PrPC binds copper [Brown 1997], probably in the octapeptide repeat region, which makes sense with the theory of SOD-like activity.  Some later authors have provided support for and/or refinement of Brown’s theory [ex. Wong 2000, Sakudo 2003, Shiraishi 2005, Treiber 2007] while others have failed to find evidence that PrP has SOD-like activity [Zocche Soprana 2011] and still others have shown it does not, based on in vivo evidence [Hutter 2003].  Hutter crossed Sod1 knockout mice with PrP knockout mice and mice that overexpress PrP and measured SOD-like activity in all of them, finding that this activity correlated only with actual Sod1 expression and not at all with PrP expression.

It seems the prion field still has not reached a consensus on this issue.  But whether or not PrP itself has SOD-like activity, there is a potential role for SOD in prion pathogenesis as it might mitigate oxidative stress that accelerates prion toxicity or propagation.  Tamguney 2008 measured scrapie incubation times in a huge battery of different genetically modified mice, including both knockouts and transgenic overexpressers of a large number of different genes, all selected based on hypotheses as to how they might affect prion pathogenesis.  Tamguney reports that mice transgenically overexpressing human SOD1 experienced scrapie onset 19% later than controls, the strongest result for any gene tested.  (App annd Il1r1 knockouts were also reported to have delays of 13% and 16% respectively.  No other genes were reported to be significant.)  Notably, the study did not include Sod1 knockout mice, so we don’t know whether these might have experienced earlier onset than controls.

What’s really interesting is that there’s also a body of literature debating whether ECT has an effect on oxidative stress and on SOD activity in particular.  As far as I can tell, only two studies have looked at markers of oxidative stress / antioxidant activity in human serum before and after ECT.  Virit 2010 assayed SOD activity in serum from 16 patients being treated with ECT for depression, before the ECT course started and after the 7th ECT treatment had finished, and found significantly reduced SOD activity.  Unfortunately Kartalci 2011, apparently the only other study on ECT + oxidative stress in humans, didn’t measure SOD. But there have also been some animal studies based on rats treated with electroshock (ECS), which is just the term for ECT in animals.  Two studies, both from the same group [Erakovic 2000 and Zupan 2008], found opposite results.  Erakovic found SOD activity was decreased in the frontal cortex 2h after 1 ECS treatment but not 24h later (enough time to recover??) and was also decreased after 5 or 10 ECS treatments with 24h and 48h rest respectively (more to recover from??): 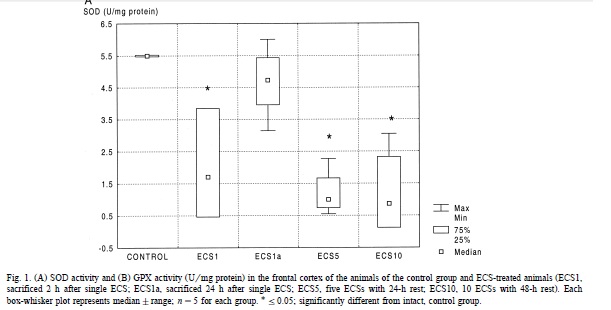 Erakovic found no significant change in other brain regions.  Zupan 2008, by contrast, found elevated SOD activity at a variety of timepoints post-ECS in rats, in the hippocampus and cerebellum (no significant effect in the frontal cortex, though a trend towards elevated activity).  Zupan speculates this difference might be due to the different ages of the rats (2-3 months in Erakovic 2000, 12 months in Zupan 2008).  But both studies had small sample sizes (about 5 rats per time point) and it’s hard to really tell what’s going on.

So by now you see just how speculative all of this is: each of these lines of evidence is weak on its own, and put together they’re even weaker.  I came to this issue wanting to figure out whether there was evidence to suggest that ECT might disrupt SOD activity (by downregulating SOD1 or simply by producing enough superoxide to occupy all of it) and thereby hasten the progression of prion disease.  This may be the case, but there’s not nearly enough in the literature to just get there yet.  It’s intriguing that one, possibly two prion disease patients seemed to worsen dramatically during ECT, that ECT may disrupt SOD activity, and that SOD activity may delay prion disease, but it would be a huge leap to start to draw a line between these things just yet.