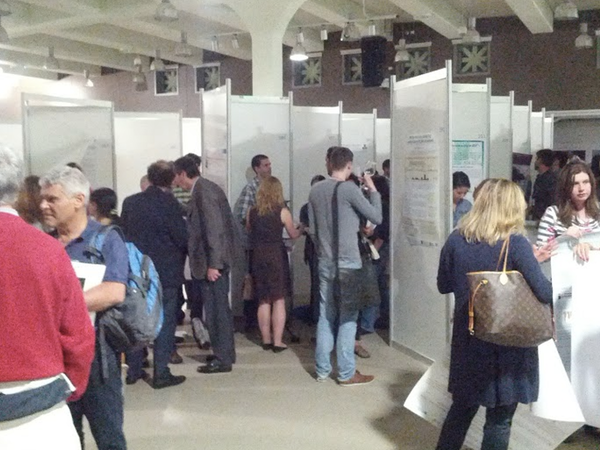 There were quite a few excellent posters at the Prion2014 poster sessions. I was busy introducing my own poster most of the time and didn’t get to see as many as I would have liked. For instance, I missed the other two posters that won prizes – Ester Vazquez-Fernandez’ Poster P.52 won the best structural biology poster. The content appears to have been closely related to Jesus Requena’s talk on Day 3: she, Requena, and Holger Wille created anchorless (ΔGPI) PrPSc fibrils and characterized their conformation with cryo-electron microscopy. It seems they were able to obtain a number of useful new constraints on the possible shape and size of the repeating units in PrPSc fibrils. Charles Mays’s Poster P.151 appears to have provided a considerable update on the PrPC downregulation work which he and David Westaway presented at Prion2013 and which has since been published [Mays 2014]. From reading the abstract it seems they now have developed cell culture models in which they are able to observe the downregulation effect, and they are treating these cells with different inhibitors of protein quality control systems in an effort to figure out what proteases or other factors are responsible for PrPC downregulation. Very cool! 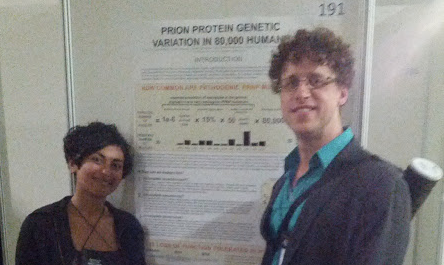 Sonia and I presented a poster on human prion protein genetic variation from the MacArthur Lab.

Sonia and I presented Poster P.191 from the MacArthur Lab, my home lab at Massachusetts General Hospital / the Broad Institute, in which we looked at human PRNP genetic variation in a large control dataset. I was thrilled that we won best poster in the “Prion and Prion-Like Diseases in Humans” category!

Here are a few other posters where I did get to spend some quality time chatting to the person presenting and they agreed to be photographed and blogged here.

Roberto Chiesa’s group had three posters – #99, #100 and #160 – on new FFI mouse models they’ve developed. Chiesa has previously developed a model of genetic CJD caused by the D178N cis 129V allele [Dossena 2008] and now used similar approaches to model the FFI mutation (D178N cis 129M) in mice. The group created several different lines of transgenic mice expressing either regular MoPrP with a D177N substitution or MoPrP with the 3F4 epitope and the D177N substitution, at various expression levels. The mice develop spontaneous, fatal neurological illness with changes in Golgi morphology (described on Poster P.100). Surprisingly, though, the disease is not transmissible. Liliana Comerio (pictured above) presented Poster P.99 which showed a huge number of transmission attempts between various permutations of host and recipient genotype, every one of which was unsuccessful. Chiesa is drawing the conclusion that there are types of misfolded PrP which are toxic but not infectious and have been modeled in this mouse. 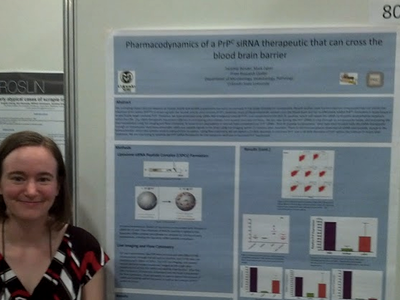 Heather Bender presented her and Mark Zabel’s work trying to get anti-PrP siRNA into the mouse brain (Poster P.80).

Mark Zabel’s group at Colorado State has been interested for a few years in figuring out how to deliver anti-PrP siRNA molecules to the brain. Their favored approach is with liposomes, and they have reported some success at getting small but significant reductions in PrPC using this approach [Pulford 2010]. Heather Bender, a graduate student of Zabel’s, presented poster #80 on her work optimizing this delivery to the brain. As in their previous work [Pulford 2010], they are using these lipid nanoparticles decorated with PrP siRNAs and with a fragment of the rabies virus glycoprotein (RVG). RVG binds to the nicotonic acetylcholine receptor with a strong affinity – therefore it is good at finding neurons and has been a favorite peptide for delivering, say, exosomes [Alvarez-Erviti 2011] and other cargo to the brain.

Bender has been injecting these siRNA- and RVG-covered liposomes into the tail vein of mice and then measuring PrPC in the brain at 0h vs. 24h. Live animal imaging shows that much of the liposome content does indeed reach the brain, though a significant fraction (30-80%) is seen in the bladder on its way to excretion. To measure PrPC in the brain, she uses a 40 μm cell strainer to separate individual cells and then measures the PrPC signal by flow cytometry. She is seeing a considerable (25-90%) knockdown in PrPC at 24h in most treated animals, but a subset of animals fail to respond entirely. We asked if it was an issue of immunity against RVG, but she said these are SPF (specific pathogen-free) mice, so they’re unlikely to have antibodies against RVG. Her work to optimize the liposome preparation and injection protocol is ongoing. 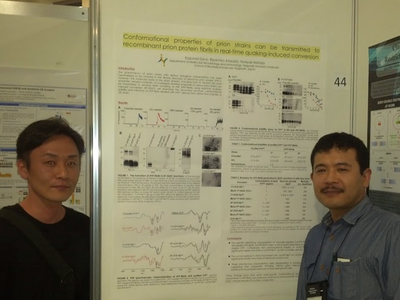 Kazunori Sano and Ryuichiro Atarashi presented Poster P.44 on the conformational properties of QuIC-derived amyloid fibrils. I was really interested in this poster. Sano has previously demonstrated the sensitivity and specificity of QuIC for diagnosing several genetic prion diseases [Sano 2013], work which I consider to be very important. We know that QuIC amyloids can be seeded by a wide range of prion strains – but do all strains seed the same QuIC amyloid, or does the amyloid produced by QuIC reflect in some way a shadow of the original strain? Their poster sought to answer this question.

Sano, Atarashi and Noriyuki Nishida performed QuIC reactions seeded with two strains – RML and 22L – in the same recombinant MoPrP substrate, with no SDS or GdnHCl, only pure water and 500 mM NaCl. They then measured conformational properties of the QuIC-derived fibrils at 1st and 5th passage.

From the FTIR spectra, at a glance, the 22L- and RML-seeded QuIC fibrils looked a lot like one another and not at all like either of the input strains, consistent with QuIC amyloid being its own conformation entirely. However, on closer inspection, there was a faint shadow of the original strains’ properties remaining on 1st passage. The 22L-seeded 1st passage fibrils had a small absorption peak at ~1620, corresponding to a larger peak at this position in the native 22L strain, while the RML-seeded 1st passage fibrils had no such peak, just like native RML. By 5th passage, no such difference was visible and the two QuIC amyloid spectra appeared indistinguishable.

They also used bioassays to show that the 1st passage QuIC amyloids contained a bit of infectivity. It was very low – less than 1 ID50 per mouse inoculated, and they had yet to rule out that it wasn’t just residual infectivity from the seed. If they can show that QuIC is indeed generating some infectivity – however small – then that will be a first. They did not see any infectivity on 5th passage, which could be further dilution of the initial seed, or it could be further drift of the QuIC amyloid from the properties of the source strain.

So while it’s still a work in progress, their hypothesis is that prion conformational properties can be transmitted in QuIC, but only to a subset of PrP molecules, while a generic QuIC amyloid conformation is dominant and becomes the sole species over repeated passage. This is interesting and I’ll be curious to see what comes of it.