These are my notes from lecture 26 of Harvard’s Genetics 201 course, delivered by Fred Winston on December 3, 2014.

This is part of a two-lecture series on epigenetics. Today will include a general introduction to epigenetics, histone modifications and DNA methylation. The next lecture will cover imprinting and X inactivation.

These factors can in turn be modified by:

Units of inheritance are not limited to chromatin either - consider also prions in yeast and dsRNA propagated by RNA-dependent RNA polymerase in C. elegans, though this series of two lectures will only cover chromatin.

Recall that yeast have two mating types dubbed a and α, and the gene complex determining mating type covers ~317kb on yeast chromosome III. The MATa/MATα locus includes genes transcribed in opposite directions from a common starting point. 190kb to the left is a locus HMLα and 90kb to the right is a locus called HMRa. These two loci encode, respectively, all of the same machinery as MATa and MATα do, but in the normal state of yeast, the MAT locus is expressed while the other two loci are silenced. This silencing is accomplished by repressive histone modifications and by a class of non-histone proteins called Sir proteins. Sir proteins have orthologs in mammals called Sirtuins which regulate metabolism, mitochondrial function and so on.

Wild-type Drosophila have red eyes; the gene which encodes the red pigment is confusingly called white, after its knockout phenotype. A chromosomal inversion which moves the wild-type white gene closer to heterochromtain results in variable silencing of the gene in some cells but not others, causing a phenotype in which some but not all cells of the eye lose their red color. This formed the basis of some enhancer screens in Drosophila and helped to reveal some of the first histone methytransferases which act on H3K9.

Somatic cells can be reprogrammed to induced pluripotent stem cells (iPSC) by transient expression of SOX2, OCT4, KLF4 and MYC. This can be accomplished by transfection with only the mRNAs, or expression of a non-integrating virus (e.g. Sendai) or an integrating virus (lentivirus). Typically only 5% of cells exposed to the reprogramming factors will successfully revert to pluripotency.

The lysogeny vs. lytic replication decision is controlled epigenetically.

Cellular sex determination in flies is determined through chromatin.

Compare and contrast the queen and worker bees:

A breakthrough paper showed that RNAi against DNMT3 - a DNA methyltranferase - caused most larvae to develop as queens [Kucharski 2008].

Amusingly, Fred notes that royal jelly is available for human consumption on Amazon.

Mutations in set-2 in C. elegans decrease H3K4me3 marks and increase longevity by ~30%. This phenotype is then inherited transgenerationally even after crossing to remove the originally causal genetic mutation [Greer 2011]. The increase in lifespan remains significant through the F4 generation of wild-type descendants (see below diagram) and finally disappears by F5. 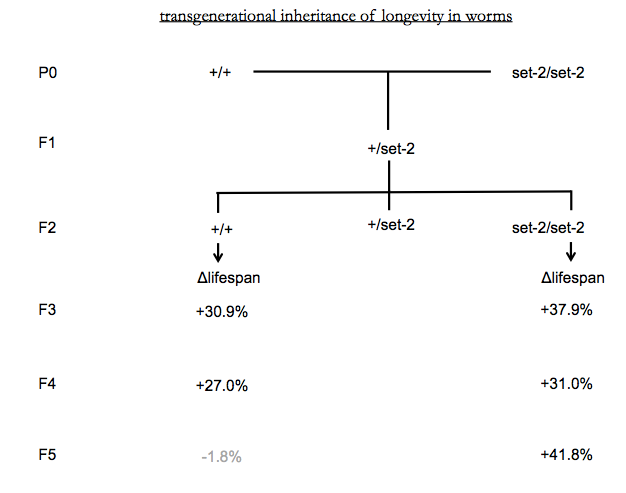 Recall from Timur Yusufzai’s molecular biology lecture 15 that histones are small proteins, ~100 amino acids. They are subject to a wide variety of post-translational modifications including but not limited to: acetylation, methylation, ubiquitylation, sumoylation and phosphorylation. Usually these modifications occur in the N-terminal tail, which is roughly residues 1-25. Occasionally you’ll hear of a modification to the C-terminal core of the histones, usually at K56 or K79. The notation is as follows: H3K4me3 means histone 3 lysine 4 trimethylation.

Some of the most important modifications are on histone 3:

The ENCODE project is an effort to systematically map histone methylation (among other things) in humans [ENCODE 2012]. There are comparable efforts in other organisms, such as mod-ENCODE in Drosophila and C. elegans. These have been largely descriptive efforts. For instance, in Drosophila they’ve now mapped 18 histone modifications and 9 combinatorial patterns, yet we still do not know how the different domains form, what their roles are, how they differ between cell types, or what the cause-effect relationship is between these and other findings. Dissecting the functional relationships will require interventions rather than just observations - for instance, experiments using RNAi.

DNA methylation is the chemical modification of cytosine to 5-methylcytosine (variably abbreviated 5mc, 5mC or 5MeC).

Some organisms have DNA methylation, while others do not:

In mice, DNMT3a and DNMT3b:

After DNA replication occurs, dimethylated CpG sites (as created by DNMT3a/b) will end up hemimethylated. A different enzyme, DNMT1, is responsible for then returning these to a dimethylated state. DNMT1 knockout is embryonic lethal.