These are my notes from lecture 3 of Harvard’s Chemistry 20: Organic Chemistry course, delivered by Dr. Ryan Spoering on January 30, 2015.

Boron has fewer than four electrons, so hybridization into four equivalent sp3 orbitals is not an option. Instead, when borane (BH3) forms, the s orbital mixes with just two of the three p orbitals, which by definition are coplanar with each other. The third p orbital is left alone. As a result the molecule is planar, and the unhybridized p orbital is left empty on the axis perpendicular to the plane of the molecule. This empty orbital is important when considering the reactivity of the molecule. Boron is extremely electrophilic, and you can think of the empty orbital as the coordination site waiting for a reaction to occur. In the molecular orbital diagram, it shows up as a non-bonding orbital of intermediate energy between bonding and anti-bonding orbitals. Note that it is a rule that for every bonding orbital there must be an antibonding orbital. 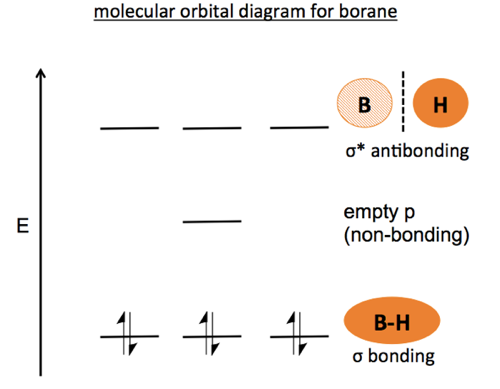 The molecule (CH2=CH2) is ethene according to IUPAC nomenclature, but often called ethylene. Because each carbon forms only three bonds, it relies on sp2 hybridization and, like borane, is therefore trigonal planar. The sp2 hybridized orbitals from σ bonds, while the remaining carbon electrons are left in the 2pz orbitals, which are perpendicular to the molecule’s plane. The two 2pz orbitals run parallel to each other, for constructive interference resulting in a π bond. This constructive interference requires that the two 2pz orbitals must be oriented in the same direction - if one were to rotate 180°, the interference would be destructive and the molecule would be destabilized. As a result, it is unfavorable to rotate about the double bond axis, and so the molecule acquires a rigid planar geometry.

As I understand it, the π bond is diagrammed as follows: 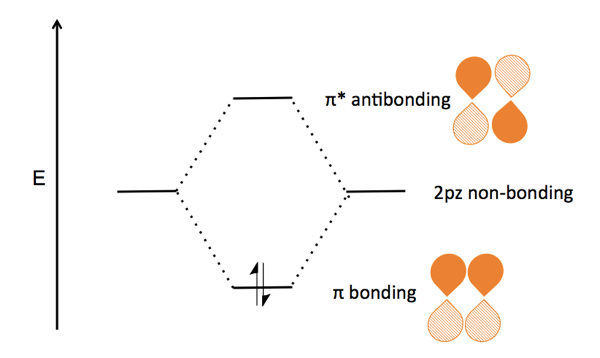 The σ bond was not diagrammed in class, and it is a bit confusing to think through where all the electrons are; I had to watch this Khan Academy video and consult this page. The ethylene molecule has a total of 12 valence electrons - four from each of two carbons, and one from each of four hydrogens. Each carbon has three sp2 hybridized orbitals which can hold a total of six electrons, so at first glacnce, you’d think that all of the electrons are used up in the sp2 orbitals. But in fact, you get to double-count one electron from each carbon - each carbon’s sp2 orbitals are filled with three of its own electrons, two hydrogen electrons, and one of the other carbon’s electrons. Thus it only takes a total of ten electrons to fill the 12 slots in the sp2 orbitals. The remaining two electrons are in each carbon’s 2pz orbital. These two half-filled 2pz orbitals align in phase with one another, thereby forming a pi bond, which is the highest occupied molecular orbital in ethylene.

Alkenes are named just like alkanes, but with -ene instead of -ane. Thus:

Trans-2-butene and cis-2-butene are geometrical stereoisomers. These are distinct molecules and cannot interconvert due to rigid π bonds.

The above two molecules are also rigid, non-interconvertible geometrical stereoisomers. We use the German abbreviations E for apart (trans) and Z for together (cis). Priority of functional groups is decided first by atomic number (carbon beats hydrogen). If these are the same, then you recursively move further out along the chains and compare. Here, numbering is still done according to the longest carbon chain, yet even though you might think that the 5th carbon on the 2-pentene chain is just part of the chain, the identity of functional groups is decided relative to the double bond. The ethyl is therefore of higher priority than the methyl, and “wins”. It is in trans to the bromine at left, and in cis at right. Note that I have labeled them with the names they were given in class, though if you use ChemDraw to generate a name, it end in “methylpent-2-ene” instead of methyl-2-pentene”.

The two arrangements of double bonds in benzene are equivalent. When benzene appears as a functional group it is called phenyl. 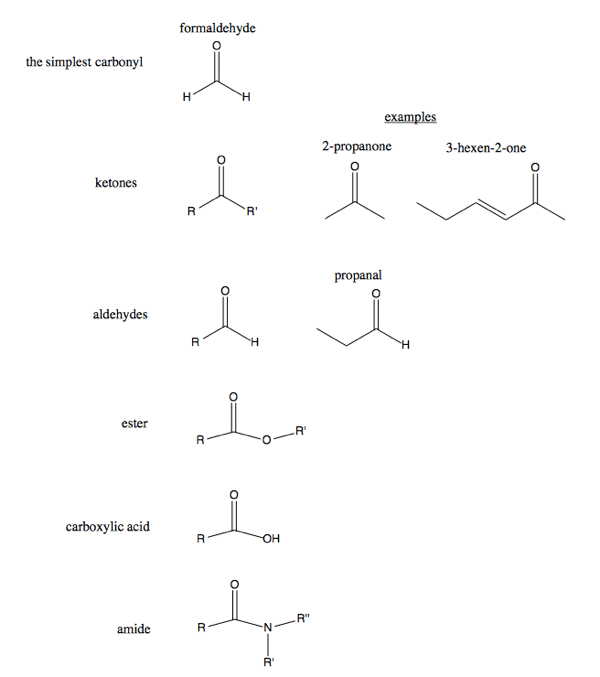 Alkynes are like alkanes but with carbon-carbon triple bonds. The simplest one, HC≡CH is ethyne according to IUPAC naming rules, but is commonly known as acetylene: 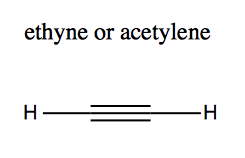 In carbon-carbon triple bonds, there is “sp” (sp1) hybridization. Because this hybrid orbital contains only one p orbital, it is linear rather than planar. The remaining electrons occupy two aligned 2py</sup> orbitals and aligned 2pz orbitals, at two axes perpendicular to the linear dimension of the molecule. You can think of the molecule as a rod surrounded by a barrel of electron density.

Alkynes take an -yne suffix and need to be numbered to specify where the triple bond occurs. If a molecule has a double and a triple bond, the alkene is the higher-priority functional group, and the double and triple bonds confer “en” and “yne” morphemes separated by carbon numbering.