These are my notes from lecture 4 of Harvard’s Chemistry 20: Organic Chemistry course, delivered by Dr. Ryan Spoering on February 2, 2015.

The structure of benzene frustrated chemists surprisingly far into the 1900s. Each side of the hexagon is 1.4Å, about halfway between the C-C bond length (1.54Å) and the C=C bond length (1.34Å). Benzene can be drawn with a resonance structure of two different configurations of the double bonds. For a long time, chemists debated whether there were indeed two separate species in equilibrium with each other. It was eventually determined that is not the case - there is in fact but a single benzene structure, which is a superposition of those two structures. Thus, drawing it with a circle in the middle is actually more accurate to how benzene behaves on its own. Yet the circle model makes it confusing to account for electrons when thinking about reactivity.

A final example is nitrites. Once again, the two structures are equal contributors.

In all of the above examples, there is actually but one structure, and it just takes two drawings of structures to explain what that one structure is.

Esters have an unusual property that is not fully captured in the drawing. There is one structure which has no formal charge and is thus more stable. However, some of the reactivity of esters can only be explained by invoking some amount of electron donation which creates a formal charge. Thus the structure at left is the major contributor, while that at right is less stable, and is a minor resonance contributor.

Similarly in amides, there is a barrier to rotation around the carbon-nitrogen bond created by the partial double bond character of the minor resonance contributor at right. This is an important factor in protein folding.

An alcohol such as methanol (CH3OH) has a pKa of ~15, about the same as water itself. Thus, the forward direction of this reaction has a very unfavorable Ka of 10-15:

A phenol on the other hand has a pKa of ~9, meaning it has about 106 greater propensity to dissociate into acid in water than methanol does.

We can draw a single structure with dotted lines that sort of reflects this, with δ- indicating partial negative charge: 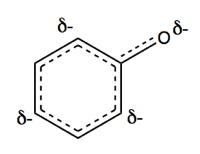 We’ll begin with a Lewis acid-base reaction. BF3 is a trigonal planar electron receptor due to its incomplete octet - it has one empty 2p orbtial. F- is an electron donor. The reaction between these two species can be accounted for by an arrow indicating the movement of lone pair from F- into that empty 2p orbital. This results in a tetrafluoroborate ion with tetrahedral shape, and a formal negative charge on boron.

In frontier molecular orbital theory (FMO), a reaction is when a filled orbtial → empty orbital. 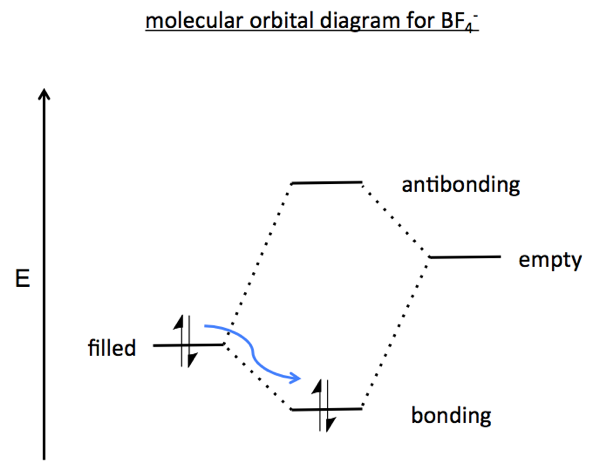 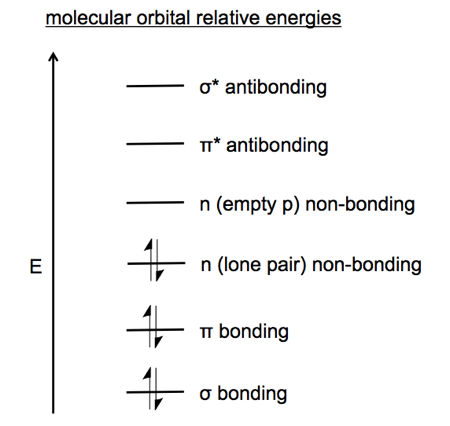 With this insight, we can draw a full MO diagram of the reaction between F- and BF3. I am not certain I got all the details correct but here is my best attempt: 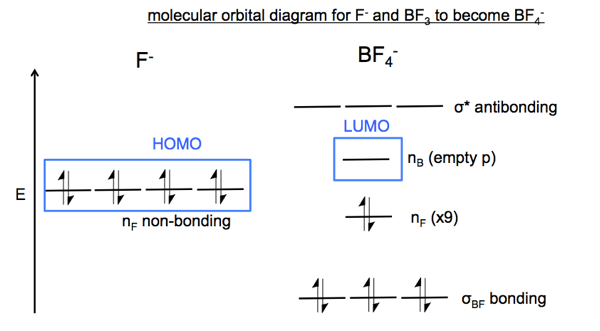 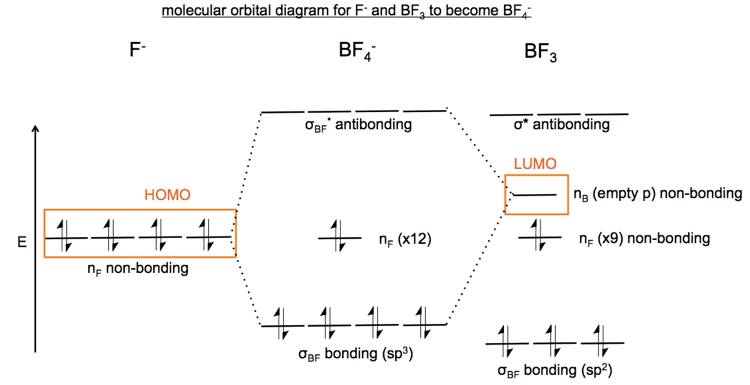