These are my notes from lecture 5 of Harvard’s Chemistry 20: Organic Chemistry course, delivered by Dr. Ryan Spoering on February 4, 2015.

In terms of molecular orbital theory, we are taking the non-bonding orbital lone pair on nitrogen and attacking the σ* antibonding orbital on H-O. Therefore this is called a nN → σ*HO reaction.

Now consider CH3O- (a nucleophile) reacting with CH3Br (an electrophile). The lone pairs on oxygen at left attach the carbon-halide bond, which is a weak bond, and substitute for the Br. This yields dimethyl ether and a bromide ion.

This is an nO → σ*CBr reaction. In particular, the nucleophile attacks the node in the C-Br bond. In order to access that bond, it has to attack from the back, so as a result, the reaction turns the molecule at right inside out.

What makes the C-Br bond weak? Whereas a C-C bond is symmetric, the C-Cl bond is polarized. It is a polar covalent bond. The energy of both the Cl non-bonding and the C-Cl σ* bonding orbital are lower than in the C-C bond - thus the whole picture is “pulled downward”. The Cl is more electronegative so it will get most of the electron density. The extreme of this situation is when Na and Cl react, all of the electrons go to Cl, and you have an ionic instead of covalent bond.

Now consider CH3O-. Because oxygen is more electronegative, the σCO orbital is lower energy than σCH. The nO orbitals are also filled. The σ* orbitals are all empty. 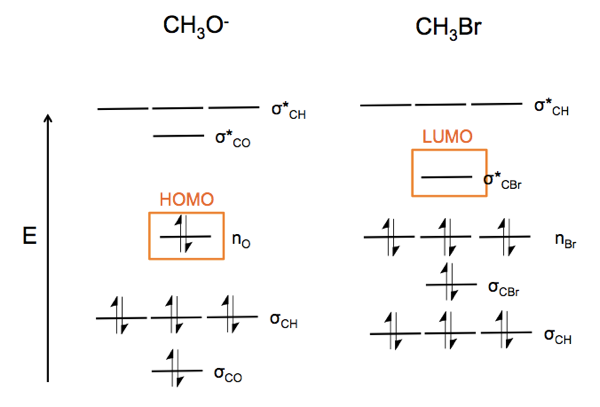 Consider polarized C=O bonds. In a ketone, if we move electrons, it will be toward the more electronegative element. For instance in ketones:

Carbonyls can react with water to become hydrated. This is not favorable for most carbonyls. It is more favorable for cyclobutanone than for most, and it is also fairly favorable for formaldehyde.

Now consider an acid-catalyzed mechanism of formaldehyde with H3O+. Here, we protonate the carbonyl oxygen. Doing so makes the C=O bond even more polarized than it was. Carbon is a weak nucleophile, but the extreme polarization of the C=O bond leaves it vulnerable to attack by the electronegative oxygen on H2O. The end result is carbonyl hydrate, same as for the previous reaction.

Most carbonyls will not do the hydration reaction diagrammed above. But cyanohydrin formation is a reaction that is more useful as a way of expanding the carbon skeleton of a molecule. It is favored (the equilibrium lies to the right) for most aldehydes and ketones.

You can also react -C≡N with cyclohexanone. This is a nC → π*CO reaction. Doing so requires pushing the electrons from the π bond up onto the oxygen. This reaction absorbs the p orbital of carbon that is forming the π bond with oxygen into the sp2 hybridized orbital to yield an sp3 hybridized carbon.

Unlike aldehydes and ketones, any carbonyls with a heteroatom as one of the R groups do not react with weak nucleophiles such as cyanide or water, because the lone pair on the heteroatom is already donating more electron density to the carbon.