Eukaryotes have the secretory pathway. Prokaryotes also have proteins that are translated in cytosol but are bound for the periplasmic space (between the inner and outer membranes). Today’s lecture will describe how these proteins get recognized and transported.

These proteins begin with an N-terminal leader peptide signal of 17-22 amino acids, believed to be generally hydrophobic and alpha helical but with no single unifying motif. This signal targets the protein to the periplasm, and is later removed by leader signal peptidase. Microbial mutagenesis screens determined that SecB, a tetramer of 16.6 kDa subunits, is involved in this pathway, along with other proteins called SecA and SecY. At first, people assumed that SecB was a mobile element that recognizes the leader signal peptide and transports it to the periplasm, but this turned out to be false.

Much of the work to elucidate SecB’s true role was done by Linda Randall using an exported substrate called maltose binding protein (MBP). Pre-MBP is 43.4 kDa, and mature MBP is 40.7 kDa. The protease that cleaves it is extracellular, so the change in molecular weight of MBP tells you whether the protein made it across the membrane. Experiments have demonstrated that SecB does not recognize leader peptides at all [Randall 1990], but instead recognizes some feature of incompletely folded MBP, which vanishes in the mature MBP, and that SecB and the leader peptide each serve to prevent that mature fold from being reached until the substrate passes through a channel into the periplasm. In fact, they showed that a variety of unfolded proteins, including diverse eukaryotic proteins such as RNAse, can outcompete MBP for binding to SecB [Hardy & Randall 1991]. Thus, SecB has some incredibly flexible capacity to recognize unfolded proteins.

SecB alone is protease sensitive, but becomes partially proteinase K-resistant when it binds a substrate such as BPTI (bovine trypsin) [Randall 1992].

The crystal structure of SecB from E. coli [PDB# 1QYN, Dekker 2003] reveals it to be a dimer-of-dimers. It has grooves where unfolded polypeptide chains bind. 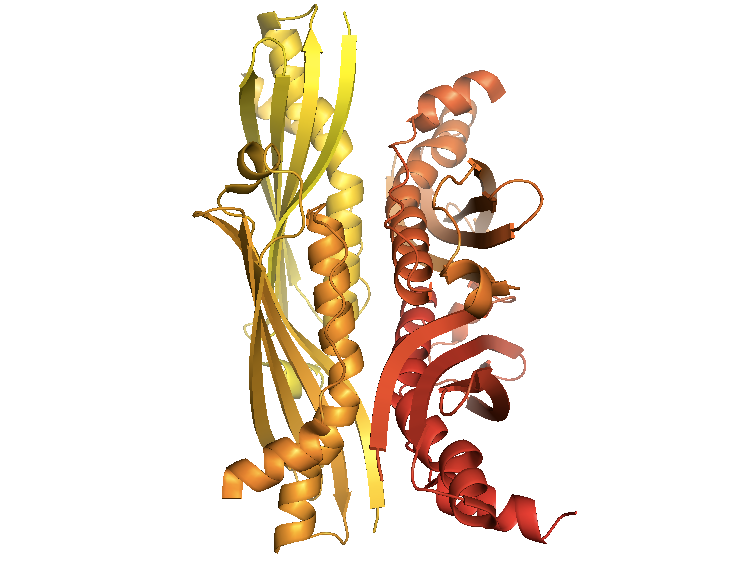 SecY is the channel through which unfolded polypeptides must pass to reach the periplasm. In its structure [PDB# 1RHZ, van den Berg 2004], whether you look in surface or cartoon mode, you surprisingly cannot see an obvious pore where the polypeptides pass through - in fact, it appears to be totally closed: 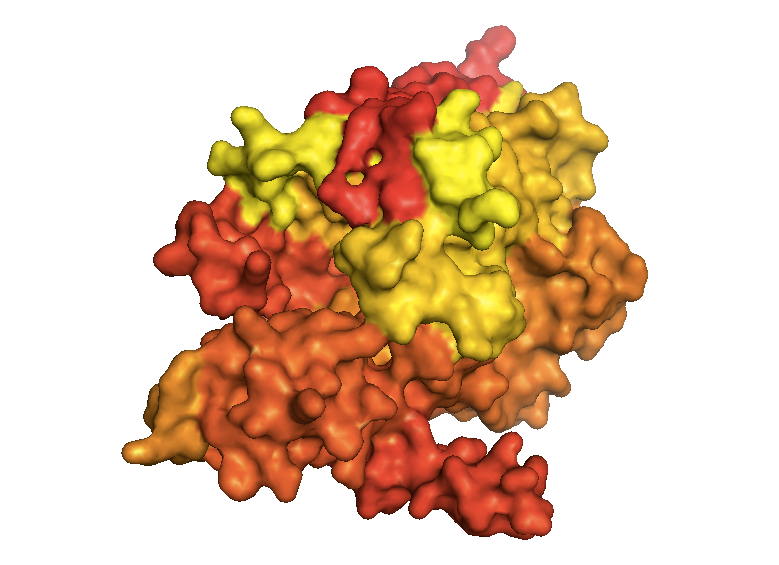 This is incontrast to OmpA [PDB# 1QJP, Pautsch & Schulz 2000], which has a permanent large hole which simply allows substrates to diffuse in and out. This hole appears filled in surface view but is immediately obvious in this cartoon view: 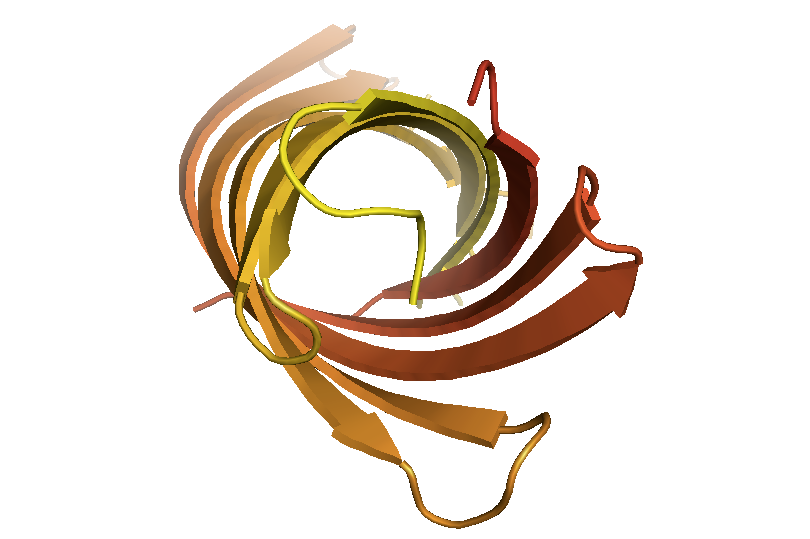 Average age of diagnosis is 67. Survival after diagnosis is 12-40 months. Incidence is 10 people per million population per year. The disease is caused by clonal expansion of plasma cells overproducing IgG light chain, which is deposited as amyloid systemically, but particularly in the kidneys, heart, liver, and nerves. Heart disease due to amyloid deposition in the heart is the most common proximate cause of death. Treatment options currently include chemotherapy and stem cell transplantation.

In case you missed it, the structure of antibodies is reviewed in Branden & Tooze. An antibody contains two heavy chain and two light chain subunits. The light chain consists of antiparallel beta sheets in a Greek key beta barrel, with the antigen-binding sites or complementarity-determining regions (CDRs) located in the hairpin loops in between beta strands. Diversity in CDRs is achieved by two different means: combinatoric and junctional. Combinatoric diversity comes from the fusing of 1 each of ~30 different V segments, ~5 different J segments, and ~3 C segments. Junctional diversity comes from asymmetric cleavage and non-templated nucleotides (TdT). See [Abbas 2014].

A few early investigators recognized that amyloidosis might be caused by mutations in light chain, and found that different missense variants in light chain reduce the stability of the protein, and the concentration of GdnHCl required for denaturation is correlated with the degree of Congo red signal observed [Hurle 1994]. They proposed that:

At the time, this was considered controversial, but today it is well-accepted. For a pretty comprehensive survey of light chain mutations, see [Poshusta 2009]. Experiments have suggested that some of the mutations that most strongly predispose light chain to form amyloid are those that disrupt the dimer interface [Peterson 2010]. Another set of experiments examined an in-frame insertion of a second proline that changes the cis-trans prolyl isomerization of the protein [Blancas-Mejia 2014]. Other work has shown that glycosaminoglycans (GAGs) interact with light chain amyloid and that highly sulfated GAGs appear to promote fibril formation [Martin 2011]. Elevated GAG levels are found in cardiac tissue of affected patients, but the direction of causality is not clear. Some studies have used cell culture models to try to figure out how light chain amyloid is internalized into cells, and exactly which multimeric species is cytotoxic [Sikkink & Ramirez-Alvarado 2010, Levinson 2013].

Q. Me: Last year it was reported that there is an increase in heart disease-related mortality among individuals with a somatic clone detectable by exome sequencing [Jaiswal 2014]. Your lecture made me wonder if some of this could be related to light chain amyloidosis or something similar.

A. It seems possible. Light chain amyloidosis is probably quite underdiagnosed, because heart disease in elderly individuals is so routine that people often don’t think to ask whether amyloidosis is present.

Symptoms of Parkinson disease are divided into three main categories:

Alpha synuclein is an intrinsically unfolded protein. It can be crystallized when bound to micelles, but in the cell, it is thought to be pretty disordered, though somewhat more compact than a random coil. Residues 1-60 contain four 11-amino acid repeats including a conserved KTKEGV motif. Residues 61-95 have a hydrophobic and amyloidogenic “NAC” region with three additional KTKEGV repeats. Residues 96-140 are acidic and proline-rich.

Lewy bodies and alpha synuclein fibrils are sometimes found on autopsy in patients who had no history or diagnosis of neurodegenerative disease. This is one observation which has led people to suggest that oligomers, rather than aggregates, may be the neurotoxic species.

There are many cellular events and environmental triggers which have been proposed as possible causes for nucleation of alpha synuclein aggregation - for instance: pesticides, heavy metals, MPTP (see here), or any of a variety of post-translational modifications, or simply interactions with the phospholipid membrane.

One of the theories of how alpha synuclein misfolding is neurotoxic is that it disrupts mitochondrial membranes, stimulating release of cytochrome c and/or increasing oxidative stress.

Q. Do we have any idea what causes sporadic Parkinson disease?

A. Jonathan King: the environmental risk factor with the greatest amount of evidence behind it is the pesticide paraquat [McCormack 2002, Costello 2009].