Today John Ioannidis visited the Broad Institute and gave a talk entitled “Meta-research: where do we stand in research on research?” Dr. Ioannidis is most famous for his paper “Why most published research findings are false” [Ioannidis 2005b] and he directs the Meta-Research Innovation Center at Stanford (METRICS). With his permission, I am sharing my notes from the talk in this blog post. 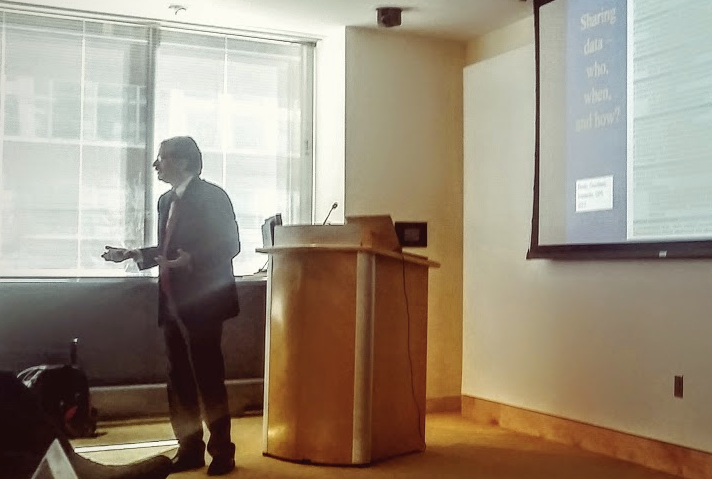 Meta-research is “research on how to perform, communicate, verify, evaluate, and reward science,” including theoretical and empirical approaches. Dr. Ioannidis wrote a recent review on the subject [Ioannidis 2015a]. Although replication has been important since the beginning of research, there has been a particular rise in interest in replication and reproducibility over the past few years. In a recent effort to text-mine P values out of papers, Dr. Ioannidis found that 96% of biomedical research papers do report significant results [Chavalarias 2016]. And while some of these are replications, the majority are novel findings, so we’re being asked to believe that 96% of new alternative hypotheses that get tested and reported are true. The proportion of claims that are statistically significant is higher in social sciences than in physical sciences, with the highest proportion being seen in psychology [Fanelli 2010].

What are some underlying drivers of the high false positive rate in clinical medicine and biomedical research?

There are large differences between fields in research practices, standards, culture, and so on — these were covered in detail in Why most published research findings are false [Ioannidis 2005b].

Here are some empirical findings demonstrating the false positive rate in science, its causes, and its consequences:

There are currently countervailing forces in biomedicine. On one hand, there is a movement towards greater openness and emphasis on reproducibility, leading to these sorts of large collaborative efforts and more requirements for openness. On the other hand, there is also a movement towards more research occurring in the private sector, with findings ending up as trade secrets that are never disclosed to the public [Ioannidis 2015b].

There are different possible levels of registration requirements for studies:

The open live streaming option has actually been implemented, for instance when Dr. Rosie Redfield of UBC live blogged her refutation of the claim that there were alien bacteria on earth that used arsenic instead of phosphorous in their DNA backbone.

Bias due to conflict of interest may also still be an issue. In published non-inferiority trials for clinical interventions, 55/57 studies found that the sponsor’s product was not inferior [Flacco 2015].

Finally, it is necessary to reform the incentives of biomedical research — Dr. Ioannidis has published a proposal for the “PQRST” system [Ioannidis & Khoury 2014], and specific “points” that should be awarded for different achievements [Ioannidis 2014].

Q. (me) I think we’ve all developed certain defense mechanisms when we read the literature to make sure that we don’t end up believing reported findings that are actually false. I want to tell you my heuristics and hear your thoughts on whether these are sensitive and specific. My process is that I am more likely to believe a paper the more of the following criteria it meets:

A. Overall these sound pretty good, however, I distrust large effects, because most real biological effects are small or tiny, whereas large effects are more likely to reflect bias. The Bradford Hill criteria for epidemiology are used to decide if things are credibly causal, and one of the original criteria was strong effect size. I am now working to eliminate this criterion, as it actually seems to be the reverse. We’ve also seen that reported effect sizes are larger in less reliable fields. In GWAS, for instance, which are highly reproducible, effect sizes by and large are tiny.

As for the other criteria: P values are meaningful in some fields, but not in others. In data science, all P values are small, but it doesn’t tell you if an effect is causal or not. Prior is a good heuristic but can be hard to judge. Orthogonal approaches are useful, though it is not always clear how to triangulate between them.

My heuristic is, I think of what is the universe of potential analyses that might have been done? Could other teams have addressed it? For instance, for association of diabetes with cancer, there are about 10 published studies per type of cancer. But the denominator is enormous - there are thousands of investigators who have access to datasets in which they could have tested for an association. Similarly, in evaluating a clinical trial, I look up the number of registered trials with the same or similar hypothesis. If there are many trials and most are ongoing (whereas they’d have been forced to stop early if they had seen a clear benefit) then that rules out any large effect.

Q. Would it help if we can do a better job of making negative results widely known, for instance, by requiring that investigators disclose negative results from specific aims of funded grants, or by making it easier or more appealing to publish in journals specifically devoted to negative results?

A. Getting a better idea of the denominator, of how many people have tested the same hypothesis and gotten a negative result, would be huge. I’m not a fan of segregating negative results into separate journals because it implies that they are second-class citizens. There are instances where a negative result, especially early on when a hypothesis has not yet been widely tested, can have very large information entropy.

Q. How can we identify fraud and/or questionable research practices?

A. We did one study where we looked for extreme homogeneity between research studies on the same topic. A lot of people have done tests of heterogeneity, looking at the extreme right side of the distribution. We looked at the far left side, at studies whose results were suspiciously almost identical to each other. The most extreme example was 5 studies by the same PI, supposedly reporting beneficial effects of using hydroxyethyl starch in resuscitation in patient cohorts from different years (1990, 1992, etc.), and the studies had outcomes that were far more similar than would be expected even if the underlying hypothesis were true. They called the PI and asked him whether these were really different patient cohorts, and he insisted they were. A few years later, he was caught in a scandal and ended up retracting 50 papers, including these 5. So that was one instance where we used a statisical method to detect what turned out to be fraud. But fraud is quite rare in science. There are a few ways to identify questionable research practices, but most are limited by what information is presented. For instance, in some cases a paper will report an F statistic and a number of degrees of freedom, and you can determine that they do not match the reported P value.

Q. How could our system for funding science be reformed to improve incentives?

A. I think of it in three categories: