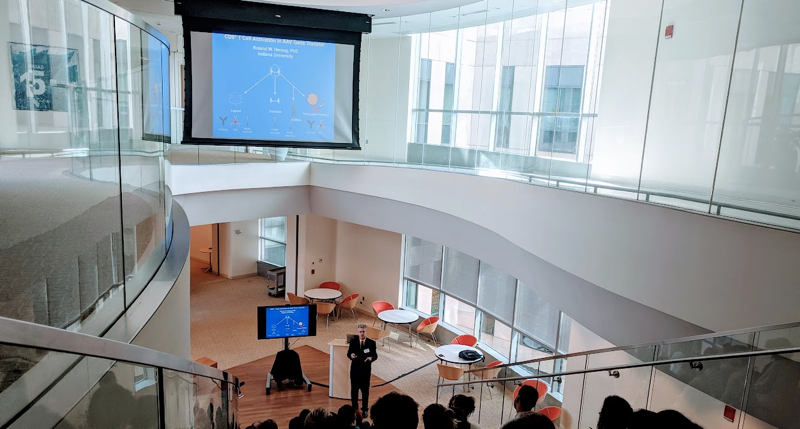 These are my notes from Dr. Roland Herzog’s lecture at the Broad Institute’s New Therapeutic Modalities Workshop series on September 20, 2019.

AAV is a preferred gene therapy vector for several reasons including its safety profile. AAV as produced in the lab and for drugs is produced without helper virus and is devoid of viral coding sequences, so that it would be replication-incompetent even in the presence of helper virus. There are now a variety of capsids with tropisms for different tissues of interest for treatment of genetic diseases. AAV is used in two approved gene therapy drugs, voretigene neparvovec for RPE65 loss of function and onasemnogene abeparvovec for SMN1 loss of function. Therapies are under development for MTM1 loss of function (X-linked myotobular myopathy) and for F8 and F9 loss of function (hemophilia A and B respectively).

Blood coagulation is driven ultimately by fibrin polymerization, but to trigger fibrin polymerization you first need a whole cascade called the blood coagulation cascade. Key steps in this process are mediated by Factor IX (F9) and its co-factor Factor IIX (F8). Both of these are X-linked, and worldwide about 1 in 5,000 males born has hemophila. Purified clotting factor (either from human donors or recombinant protein) is standard of care but has short duration of action and has to be administered 3x per week, at a cost of $300,000 per year.

A longstanding dream is to have a one-time therapy for hemophilia using viral expression of the missing coagulation factor in the liver. There is a clear dose-response from the genetics of the disease — for F9, <1% wild-type clotting activity corresponds to severe disease, 1-5% to moderate disease, and >5% to mild disease [George 2017]. Early trials achieved just 5% wild-type clotting activity, but have now demonstrated duration of that expression up to 8 years post-treatment. A more recent trials have achived 33% wild-type activity [George 2017].

Although AAV are less immunogenic than many viruses, their immunogenicity continues to be a major hurdle in a few ways. First, immune responses have been obseved in trials. Second, treated patients develop seropositivity against the AAV and so might not be able to receive a second treatment if a limit to single-treatment AAV durability is ever encountered. Third, patients with pre-existing seropositivity against the AAV type of interest are always excluded from clinical trials.

How does the body recognize and respond to AAV? The protein capsid is the obvious source of immunogenicity and we know that the different AAV serotypes correspond to different changes in the capsid. But there are at least three other possible sources of immune response: the viral DNA genome, the therapeutic transgene being packaged, or the dsRNA that is generated upon transcription of the viral genome.

The viral genome itself can be immunogenic through stimulation of innate immunity via TLR9 [Martino 2011]. TLR9 responds to unmethylated CpG content in DNA, which is higher in pathogens than in human DNA, and depleting CpG content from the AAV vector can reduce this response [Faust 2013]. And George Church’s lab has a spinout, Ally Therapeutics, employing another approach to reduce innate immune response to viral vector DNA.

Immune response to the therapeutic transgene is particularly a concern in individuals with null mutations, where their immune system has never seen that protein before. Antibodies against dystrophin and α-1 antitrypsin have been detected in patients with these deficiencies [Mendell 2010, Calcedo 2017]. Evidence from several models suggests that the nature of the host’s mutation is a major determinant of immune response to the transgene [Cao 2009, Rogers 2014]. Dose (number of viral genomes) also matters a lot [Kumar 2017]. In a dog model of hemophilia, the introduction, into muscle, of wild-type Factor IX itself was immunogenic to dogs with a null mutation, but not to those with a missense mutation [Herzog 1999, Herzog 2001]. This immune reaction could be avoided by directing the gene therapy to the liver instead of muscle [Mount 2002]. There is now evidence that gene transfer to the liver may be a viable strategy, more broadly, for encouraging immune tolerance to a therapeutic transgene [Markusic 2013, Perrin 2016]. Treatment with rapamycin may also be able to help suppress immune response to transgenes [Moghimi 2011].

One recent report indicates that a dsRNA-sensing mechanism is involved in innate immune response to AAV [Shao 2018], apparently because dsRNA is formed when the viral genome is transcribed in transduced cells.

When the body responds to the AAV capsid, killer T cells (CTLs) may not only attack the virus, but may also destroy transduced host cells [Manno 2006, Mingozzi 2007, Martino 2013].

In Q&A, the topic came up of excluding seropositive patients from AAV gene therapy clinical trials. Dr. Herzog noted that the assays used to assess seropositivity are not at all standardized. Practically every company invents their own assay for the data they submit to FDA. In a typical format, AAV expressing a reporter gene, usually luciferase, is added to cells growing in a 96-well plate, with patient serum mixed in at a series of dilutions. The cells treated with saline or negative serum will light up with luciferase, but if the patient has neutralizing antibodies, then the cells where AAV was neutralized by their serum will remain dark, and the highest serum dilution at which lack of luciferase expression is observed tells you the titer. The problem is that different AAVs have different tropisms for different cultured cell lines, and so the multiplicity of infection (MOI, number of copies of AAV per cell) needs to be different in different assays. But if the MOI is 100x higher in one assay than another, then the patient antibody titer required to neutralize luciferase expression is also 100x higher, and so “titer” cannot at all be compared between assays. If a physician wanted to make an informed decision of whether to treat a seropositive patient with an approved AAV therapy based on whether there existed good safety and efficacy data for patients with that titer of seropositivity, they would have a difficult task in front of them.

To what extent would/does seropositivity impact on the safety and efficacy of the drug? Some investigators have viewed seropositivity as mostly an efficacy issue. In fact, there have even been efforts to spike active AAV with a large amount of empty AAV capsid, on the theory that the empty virus sops up the immune response, allowing more of the active AAV to evade neutralization and transduce the desired cells. However, there have also been some reports of complement activation in AAV-treated patients in clinical trials, suggesting that immune response could potentially rise to the level of a safety issue.