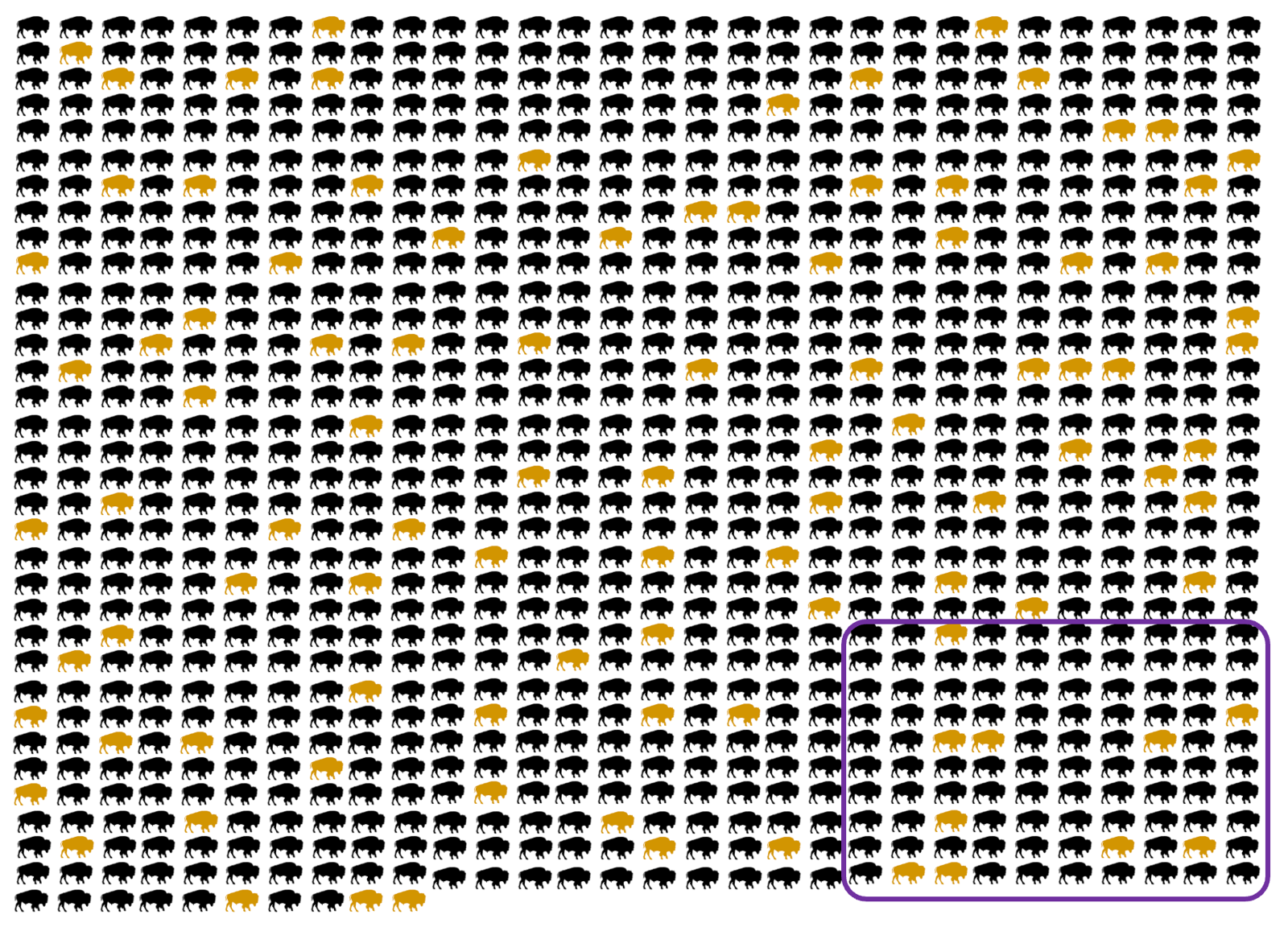 Above: an illustration of the capture-recapture method. See text below.

Every time we give a talk about our vision of developing a drug for prion disease, people want to know — how rare is this disease, anyway? Are we talking about an “N of 1”, or an ultra-rare disease with tens of patients, or a “commercially viable” indication with thousands of patients? That last option is the answer. If you read this post back in 2018, you know that prion disease isn’t as rare as people often think. The oft-quoted “1 in a million” figure refers to an annual incidence (and an underestimate at that), not a lifetime risk. All in all, prion disease is the ultimate cause of death for about 1 in every 6,000 people [Maddox 2020]. Rare, but not vanishingly so.

So how many patients are there and how many could we enroll in trials or treat with a new drug? In this post I’ll look at this question from a few different angles.

First, let’s consider how many patients present with symptomatic prion disease. In the U.S. there are estimated to be 300 - 500 new cases per year [Maddox 2020]. Japan reports about 250 - 300 cases per year [Nishimura 2020]. In 2018 (still the last year with reasonably complete data), Europe saw 931 cases. In 2019, China saw 520 cases [Kang 2022]. Remember all of these figures refer to new cases, and survival time is short, meaning these numbers add up to a different set of 2,000+ symptomatic patients every year. An effective new drug would increase the number of patients, because the patients from last year would still be alive this year. Even the prospect of a new drug should increase the number of patients detected, by motivating neurologists to prioritize testing for prion disease. Right now, many neurologists view prion disease as the diagnosis of last resort, and work first on ruling out all the treatable causes of rapid dementia. Across countries, one study found that the true underlying incidence of prion disease is probably the same, but the best predictor of how many cases are detected is how intense the surveillance efforts are [Klug 2013]. The countries that are the most dedicated to surveillance detect about twice as many cases per capita as the U.S. That may be a sign that here, too, the incidence of detected cases could double if we had a new drug to motivate diagnosis. But even today, there are enough cases out there to make a drug development program viable. And to enroll clinical trials, even if one sets a pretty strict threshold on how impaired the patients are, like in the recent PRN100 paper where all the enrolled patients had an MRC Score ≥14 at time of recruitment [Mead 2022], it should be possible to enroll hundreds.

Next, let’s consider people in Sonia’s position: healthy, asymptomatic, but harboring a high-risk genetic mutation in PRNP. The majority of these will be carriers of P102L, D178N, and E200K, but according to the latest comprehensive catalog in Sonia’s new genetic counseling primer [Goldman & Vallabh 2022], there are 27 different PRNP mutations that have either Mendelian segregation or de novo variants suggesting high penetrance. How many healthy people out there carry one of these 27 mutations?

One approach is to estimate based on the prevalence of symptomatic cases. 1 in every 6,000 people dies of prion disease [Maddox 2020], and let’s say about 12% have high-penetrance PRNP mutations [Minikel 2016], that means 1 in 50,000 deaths is due to genetic prion disease. Therefore, 1 in 50,000 people in the general population must have a high-penetrance PRNP mutation.

In principle, we can cross-check such an estimate with DNA sequencing or genotyping data from the general population. The problem is, even today we don’t have data on enough people from the general population to get a really good estimate for such rare mutations. But just as a sanity check, 1 out of the 141,456 people in gnomAD v2 is a PRNP E200K carrier, and that’s in a dataset where people are old enough (median age ~55) that it should be fairly depleted for mutation carriers. When we collaborated with 23andMe, we found “1-5” high-penetrance mutation carriers out of about half a million people [Minikel 2016], again on the same order of magnitude, and that’s with the caveats i) 23andMe did not genotype for all possible PRNP variants, and ii) at that time, penetrance was not yet clear for some variants, such as P105L, that we now believe are highly penetrant. So population sequencing/genotyping data are not in disagreement, at least, with the 1 in 50,000 figure.

A recent paper from Simon Mead’s group in London [Corbie 2022] presents yet another approach, which was brand new to me. Dating back to 1896, there’s been a statistical method in field biology called “capture-recapture”, which was recently adapted for studying genetic disease in humans [Ranola 2019]. The original idea was, let’s say, you want to count how many wild bison there are in Yellowstone National Park. You go out one month and capture and release as many of them as you can, tagging or marking them each with a little bracelet or something (animals colored yellow in the graphic at top; the number “marked” is denoted m1). Then you wait a little while, go out again and capture as many bison as you can again (purple box in the graphic at top; the number caught is n2) and count how many are already tagged from the first time around (yellow animals within the purple box, m2). The estimate of how many bison there are is n = m1×n2/m2. So if you caught 100 each time, and the second time, 10 of them were already tagged, you estimate that there are 100×100/10 = 1,000 bison. Adapting this to human genetic disease, the “marking” is just whether doctors saw a individual in that family become sick. Looking at genetic prion disease in the U.K., there were 83 three-generation families that presented a case in 1990 - 2007. Then there were 93 three-generation families where someone got sick in 2008 - 2019, of which 25 had also had a case present in 1990-2007. This would suggest there are 83×93/25 = 309 such families in the U.K. Of course this is sensitive to whether there is immigration or emigration, whether the diagnosis rate is improving over time, and whether a family that’s already had one case is more likely to correctly diagnose their second case. After testing the sensitivity to a few such assumptions and calculating a few different ways, they estimated there are 1,091 (95% confidence interval, 720 to 1,461) mutation carriers in the U.K. today. The U.K. population is currently about 67 million, so that’s about 1 in 61,000. And while diagnosis may be better in the U.K. than in many countries, the true underlying number shouldn’t be much different anywhere in the world, because the prevalence of genetic prion disease is driven mostly by recurrent mutation of a few specific DNA variants that have arisen over and over again in different families [Minikel 2019].

This adds up to a lot of patients. There are 329 million people in the U.S., so these prevalence estimates suggest there should be perhaps 5,000 or 6,000 mutation carriers in this country. As of a few years ago, the prion surveillance center reported that a total of 221 currently asymptomtic people had undergone predictive testing and received a positive genetic test report [Minikel 2019]. That’s a much smaller number — could it be that less than 1 in 20 people with a PRNP mutation actually knows it? Yes, probably. First off, most people probably don’t even know they are at risk. If your mutation is de novo, your parent never developed disease (even for high-risk mutations, penetrance is not 100%), your parent was never diagnosed correctly, or your family just kept it all a secret and never talked to you about it, then you have no way of knowing you might be at risk. Then, even of people who do find out they are at 50/50 risk, most don’t choose to pursue predictive testing. One study, again from the U.K., found that only a quarter of people who learn they are at 50/50 risk choose to get tested [Owen 2014] — and in many genetic diseases, the testing rates are even lower.

The bad news is, prion disease affects a lot of people. The silver lining is, we do have enough patients to develop a drug. If one thinks about the patient base from which you could recruit for clinical trials, there are thousands of patients becoming symptomatic each year, and hundreds of known asymptomatic mutation carriers. If one thinks about the aspirational patient base of who you could reach in a few years if a drug spurred more aggressive diagnosis efforts, and motivated more at-risk people to get predictive genetic testing, the numbers could increase by a lot.