Yesterday I attended a lecture by the folks at the Broad Institute about the new release of Genome Analysis Toolkit (GATK) 2.x.  For those who don’t know, GATK (together with BWA and Picard, with which it comes bundled) is an end-to-end solution for sequencing, going from raw FASTQ reads coming off of a sequencer all the way to finished genotypes or haplotypes.

I have been working on a pipeline for analyzing exome data and, after many software problems, had initially given up on GATK and used an alternative approach (blog post forthcoming).  However this workshop has given me enough reason to go back and try again to get GATK working on my data.  First, it’s emerging as a gold standard: apparently it now boasts 6,000 users, making it far and away the most widely used solution.  Second, improvements are coming along fast, and that is much of what this talk was about.  Here are a few highlights of 2.x as opposed to 1.x:

Another highlight was something I believe is not actually new, but that I didn’t know about before: Queue.  There are a LOT of steps in GATK.  To wit: 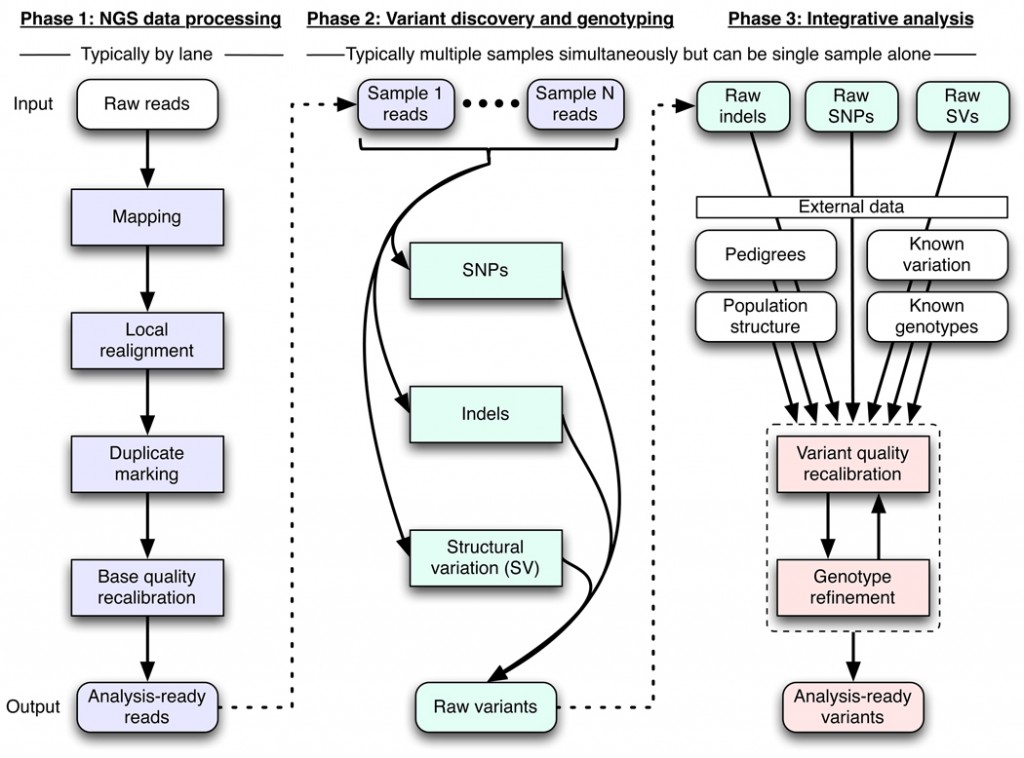 That’s Figure 1 from DePristo 2011‘s paper on GATK.  So naturally it becomes a pain having to pipeline all these steps yourself, and deal with job scheduling, memory requirements, intermediate files, etc.  Queue is supposed to take care of that for you.  They also gave us an order of magnitude estimate of time savings which is always helpful — a UnifiedGenotyper job which would take 10 days to run in series can be parallelized to run in 6 hours using Queue.