Priola 2000 documents the effects of three molecules in scrapie-infected mice: 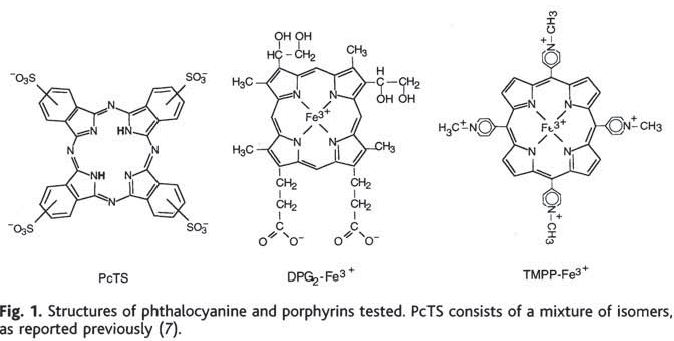 Transgenic mice overexpressing hamster PrP were infected intraperitoneally with “a high dose of” 263K prions, a hamster scrapie strain.  (The exact dose is never stated).  The candidate molecules had been selected based on their performance in an earlier series of cell culture experiments [Caughey 1998].  In a subsequent commentary piece, Priola had expounded upon the advantages of these compounds over the other purported antiprion agents of that day: low toxicity, potential for chemical modifications in order to cross the blood-brain barrier, and availability of a large variety of well-characterized compounds in the same classes for testing and chemical modification [Priola 1999].

Intraperitoneal injection of the candidate molecules was commenced at 0, 28 or 56 days post-infection, and was supposed to last for 12 treatments at 3x/week (though some animals died before the treatments finished).  For one of the molecules, PcTS (left), they also tried coincubating the 263K prions with the compound before injection into hamsters.

For treatments starting at 0 dpi, the delays in disease onset were huge: 45% for DPG2-Fe3+, 110% for TMPP-Fe3+, and 165% for PcTS.  The animals infected with 263K prions coincubated with PcTS also had a 125% delay in onset.  Results for animals treated at 28 or 56 dpi with these compounds were much less exciting: 6 to 8% delays in onset and some results not statistically significant; the 56 dpi PcTS mice actually had a significantly earlier onset (-8%).

Looking at the molecules above, they all have some charged moieties and so you wouldn’t necessarily expect them to cross the blood-brain barrier.  Discussing their results, the authors say:

none of these compounds are known to cross the blood-brain barrier, and thus it appears unlikely that disease inhibition is occurring through the central nervous system…. the data… are consistent with the hypothesis that [each compound] interacts directly with the infectious agent in peripheral tissues to slow disease onset.

This paper was presumably heralded as a big deal at the time– after all, it’s in Science– but comparatively little effort seems to have gone into validating and extending the results since 2000. And indeed, it is hard to imagine how to make these results therapeutically relevant.  Genetic and sporadic prion diseases are believed to originate in the CNS, where these molecules probably won’t reach them, and most patients (especially for sporadic diseases) won’t find out they have a prion infection until symptoms have already taken hold.  Even for variant prion diseases acquired orally, it’s hard to imagine a situation where immediate prophylaxis would be possible– much more likely a recall would be issued and you’d find out that meat you ate days or weeks ago was potentially contaminated.  The real-life situation for humans that most closely mimics the 0 dpi treatment would be if a prion researcher pricked him or herself with a contaminated needle in the lab and noticed it immediately.

Of course, the antiprion activity of these molecules does look quite potent, and the authors conclude on the note that the molecules could be optimized for therapeutics. The only paper I could find that followed up on Priola’s results was Kociscko 2006.  Kocisko tested four porphyrins, from two classes of porphyrin molecules, TAP and TSP (shown below) with and without a variety of metal atoms: 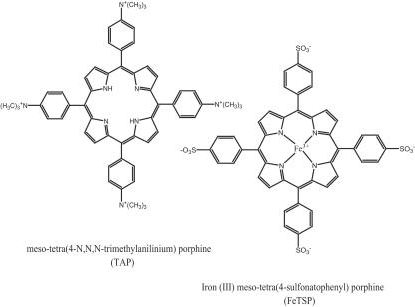 The mouse model was the same as above — mice overexpressing hamster PrP — and they were infected intraperitoneally with 10-2 brain homogenate.  Table 1 shows massive (+46% to +485%) delays in onset when the mice were injected intraperitoneally with the drugs prophylactically (for a few weeks before and after infection).  Table 2 shows comparatively more modest (+8 to +37%) but still significant delays in onset when the brain homogenate was coincubated with the molecules, and Table 3 shows similar results (up to +40% delay) when the mice were injected intracerebrally with the molecules.

And that’s the catch.  Injected intracerebrally.  The most effective intraperitoneal prophylactic was FeTAP, but only worked prophylactically; it didn’t work when administered intraperitoneally starting 50 dpi, which Kocisko notes is unsurprising given that “TAP and TSP compounds may have little blood-brain barrier (BBB) permeability”.  That’s why they injected the compounds intracerebrally to get the results in Table 3.  They used pentosan polysulfate (PPS) as a positive control, i.e. something known to delay scrapie onset in vivo, and sure enough, PPS delayed onset by 50%, just a bit more than FeTSP.

PPS apparently failed in preclinical compassionate use due to lack of efficacy and also because “the surgical complications of intraventricular catheter and pump placement were significant” [Dr. Ian Bone quoted by MRC] — referring to the apparatus required for continuous infusion directly into the brain in order to bypass the blood-brain barrier.

It’s clear that the porphryins and phthalocyanine molecules tested in these studies really do have potent antiprion effects, at least in vitro and in mice.  So it’s a tantalizing result but one that doesn’t seem easy to extend to therapeutic relevance in humans.