These are notes from lecture 9 of Harvard Extension’s Cell Biology course.

Signaling is how cells and organisms get inputs from their environment, and how cells in multicellular organisms communicate with each other.  In terms of differentiation, signaling in embryonic development allows establishment separate developmental lineages such as endoderm vs. mesoderm vs. ectoderm and in adult organisms for proper differentiation of stem cells.  In terms of environmental response, signaling includes everything from migration of cells in response to growth factors up to fight or flight responses to environmental threats to the organism.

Signaling molecules are synthesized in signaling cells and then released to affect other receiving cells by binding to a target receptor.  In some cases that receptor affects a second messenger inside the recipient cell.

Most signaling molecules are too large and/or hydrophobic to get through the cell membrane, hence the need for protein receptors on the receiving cell’s membrane.  Receptors are usually integral membrane proteins and the binding site is usually located in the strictly extracellular portion but is sometimes in the membrane spanning domain.  Binding of the signaling molecules (aka first messengers) to these cell surface receptors leads to an increase or decrease in concentration of intracellular signaling molecules (second messengers) which bind other proteins to modify their activity.

Rapid responses to environmental signals usually go through the nervous system and travel via hormones (insulin, epinephrine, dopamine for instance) synthesized in places such as the pancreas, pituitary glands, hypothalamus or other neurons.  Signaling molecules are synthesized in the cytosol, trafficked through the secretory pathway and then held inside the cell until a signal indicates to exocytose them.  Such signals usually lead to ‘short term responses’ unless of course the cell is exposed to the signal for an extended period of time.

Here are the different types of signaling:

One experimental technique for finding a protein that acts as a receptor for a particular signaling molecule is affinity chromatography:

Similarly, molecular cloning can be used.  Simply take a cell type that doesn’t bind the ligand and screen a library of cDNAs to find those which cause the cell to bind the ligand.

Alternately, if you know the impact of cell A’s signal on cell B, you can use mutagenesis screens.  For instance if you know that cell A causes cell B to become an R7 neuron instead of a cone cell, you can screen for mutants that become a cone cell.  Those mutants might have the receptor for that particular differentiation signal disabled.  But other mutations in the relevant pathway can create false positives, so this is a tricky technique.

One way to test the function of G protein coupled receptors (introduced below) is via Fluorescence Resonance Energy Transfer (FRET) which lets you get a readout of the proximity of two different proteins.

The largest class of receptors is G protein coupled receptors (GPCRs).  There are ~900 of them.  Activation of these receptors alters gene expression and can lead to differentiation.  The mechanism is often that the ligand binding has GEF activity: it causes a conformational change in the GPCR that exchanges GDP for GTP.  A separate GAP will later act as an ‘inactivator’, causing the G protein to hydrolize its GTP, leaving it bound to GDP and thus in an inactive state.

Epinephrine is a hormone that binds to a GPCR.  In the liver it can cause an increase in cAMP levels leading to glycogen breakdown and glucose release; in muscle it increases intracellular Ca2+ and promotes muscle contraction.

Broadly, there are two classes of G proteins involved in signaling:

The cycle of activation and deactivation of trimeric G proteins and GPCRs is shown in this Wikimedia Commons graphic by repapetilto: 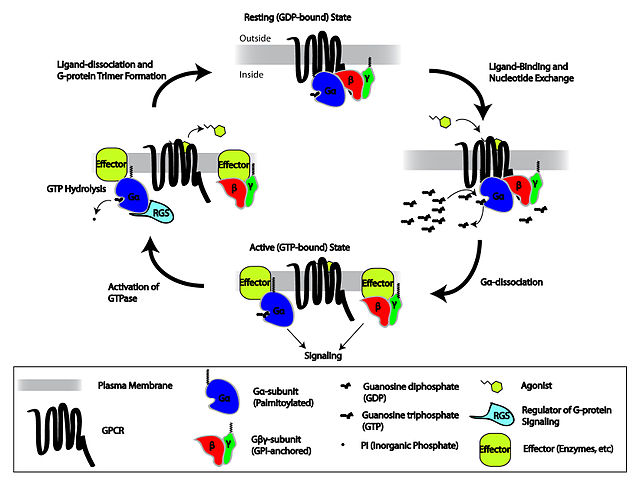 The most famous G protein coupled receptor pathways are the ones in which the effector protein that Gα binds to is adenylate cyclase (AC). AC is an enzyme which catalyzes the conversion of ATP to cAMP.  Various Gα may either activate or inactivate AC, but either way, the upshot is that the GPCR acts via AC to use cAMP as a second messenger effecting downstream changes in the cell, often (always?) via binding to and activation of the Protein Kinases A (PKAs).

Here are some examples of GPCR pathways:

Here is a video which summarizes many of the concepts of G protein signaling:

On the other hand, cells have many feedback mechanisms for downregulating or turning off incoming signals.  For instance, PKAs may phosphorylate and inactivate the receptor, the cell may endocytose the receptor following a β-arrestin signal, GAPs may cause Galpha to hydrolyze ATP and return to the G protein in the ‘off’ position, or a type of phosphodiesterase (which is regulated by phosphorylation by PKA) may break down cAMP into AMP.

One of the theories as to PrP’s native function is that it’s involved in signal transduction.  An oft-cited paper is Mouillet-Richard 2000 (ft), who implicated PrPC as a receptor in a signaling cascade involving Fyn (gene: FYN) and Caveolin-1 (gene: CAV1).  The possible relevance of this to prion disease is not yet totally clear, but last year some fascinating new evidence came out for how this might play a role in Alzheimer’s [Larson 2012].  You’ll recall from the PrP/Aβ post that PrP has been shown to bind Aβ oligomers [Lauren 2009] and, though it’s still extremely controversial, this binding has been proposed to be necessary for Aβ toxicity, thus implicating PrP as an indispensible intermediary in Alzheimer’s pathogenesis.  Meanwhile, there’s also been evidence (which Larson reviews) that Aβ activates Fyn, and that this activation is required for some aspects of Alzheimer’s pathology.  Fyn is a Src tyrosine kinase, meaning that when active it phosphorylates Y residues on other proteins.

Larson’s contribution was to show that when Aβ binds PrPC, PrPC then complexes with Fyn, activating its kinase activity and causing it to phosphorylate Tau.  If true, this would seem to position PrP at the long-missing causal link between the two big features of Alzheimer’s pathology: Aβ oligomers and hyperphosphorylated Tau tangles.  This conclusion is sure to be controversial, and in recognition of the considerable controversy already surrounding PrP/Aβ connection, the authors were very explicit about exactly what proteins they used, obtained from where and purified how, and then what they measured and how.  Such was the exhortation of a strangely anonymous opinion piece, “State of Aggregation” in Nature Neuroscience [No Authors Listed 2011] which stated that:

It is critical that studies examining the functional consequences of aggregated proteins clearly identify the exact source and aggregation state of the protein and critically discuss the implications of their approach.

Hopefully such openness will lead to some clear answers about PrP and Aβ in the near future.  Larson’s evidence does look quite compelling, and may merit some further treatment on this blog after a second read.