At Prion2013, David Westaway and Charlie Mays gave an excellent talk and poster, respectively, on their work demonstrating that PrPC is downregulated during prion infection. 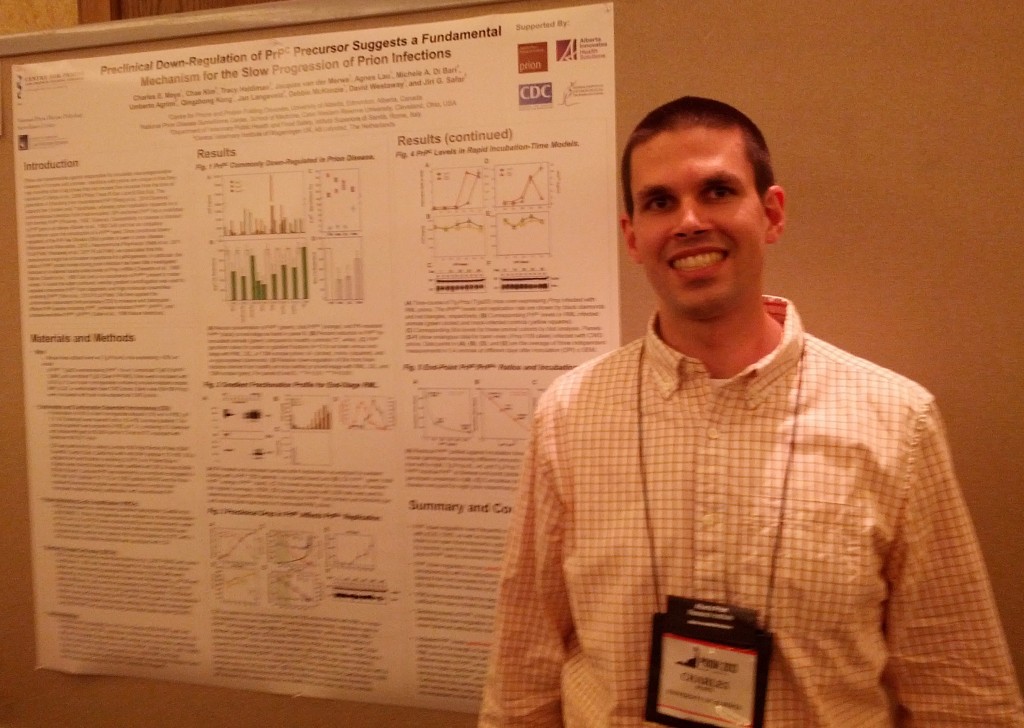 Charlie Mays with his poster on PrPC downregulation.

The backstory is that a couple of years ago, Westaway and George Carlson discovered that Shadoo (gene: SPRN), a PrP paralog named for being a ‘shadow of prion protein’, is downregulated during prion infection [Westaway 2011].  This change is strictly post-translational – mRNA is not affected.  The change happens about halfway through the incubation time in vivo and is fairly dramatic, with Shadoo levels reduced by about half.  The authors’ hypothesis to explain this result is that once PrPSc accumulates to a certain level, the cell mounts a response, possibly a storm of proteases intended to shear up PrPSc, but that since much of PrPSc is protease resistant, it escapes relatively unscathed, while its paralog Shadoo bears the brunt of the response.  Westaway showed a nice Pac-Man drawing of this hypothesis in his talk, which I attempt to duplicate here:

This gives rise to an obvious question: if this hypothesized protease response is nonspecific enough to hit Shadoo, shouldn’t it hit PrPC as well?

Indeed, it does. Mays and Westaway showed compelling evidence that PrPC is posttranslationally downregulated by about half, sometime around halfway through prion infection.  This effect was pretty consistently observed across several different models, though there were a couple of transgenic mouse lines in which it failed to show up.

One audience member asked if this could be just “mass action”, i.e. there’s less PrPC left because so much is converted to PrPSc?  No – Westaway pointed out that decades ago it was shown by metabolic labeling (incorporation of radiolabeled 35S methionine into PrP) that no more than 3% PrPC molecules synthesized ultimately become PrP-res [Caughey & Raymond 1991 (ft)].  Dr. Stanley Prusiner asked Westaway how he knew it wasn’t just selective loss of PrP-expressing neurons.  For this the main line of evidence seemed to be that the downregulation occurs early enough that little to no neuronal loss is yet observed.

So the effect seems to be real.  This offers the tantalizing possibility of finding some pharmacological means of activating this supposed protease response even earlier or more dramatically, thus depleting the PrPC substrate for PrPSc conversion.  Later in the day I asked Westaway for his thoughts on this idea, and he wholeheartedly agreed it was a promising route.  Their current work is aimed in part at understanding exactly what process/protein/response is activated that leads to increased PrPC (and Shadoo) downregulation.

Besides its therapeutic potential, this may also be a big step forward in our understanding of the basic science of prions.  The researchers postulate that this response is a key reason for the inherently slow nature of prion infections – just when PrPSc production is ramping up, its substrate gets depleted by half.  It’s also seemingly the first evidence that our cells aren’t so dumb after all – we may not have an immune response to prion infection, but we do have some sort of mechanism in place for detecting the accumulation of PrPSc and mounting a response.

This result also led to some interesting discussion of the kinetics of prion propagation. Westaway argued that the downregulation of PrPC could help to explain the fact that infectivity plateaus midway through disease progression [Prusiner 1982, Sandberg 2011].  Mays and Westaway did also observe eIF2α phosphorylation, though only at the terminal stage, somewhat later than observed by [Moreno 2012].  There were a lot of other details I didn’t catch or fully understand – but hopefully this work will be published soon.