Doxycycline is the only drug currently in clinical trials for treating prion disease.  It belongs to the class of drugs called tetracyclines, which have been investigated for about 15 years for antiprion properties.  A few years ago doxycycline was advanced to multiple clinical trials in Europe, in patients presenting with symptomatic Creutzfeldt-Jakob Disease (CJD).  It is also currently in a trial of prophylactic use in asymptomatic carriers of the fatal familial insomnia (FFI) mutation.

I’ve lamented before that for all the study of doxycycline underway, none of the clinical trial results have yet been written up in a peer-reviewed publication.  At Prion2013 I was able to at least get the latest update on two European trials of doxycycline.

Jean-Philippe Brandel presented on the results of randomized, double-blind, placebo-controlled study in France (n=66) and Italy (n=55).  About half of the patients were treated with 100 mg/day doxycycline, the other half with placebo.  The doxycycline and placebo groups did not differ significantly in sex or codon 129 genotype.  Subjects included sporadic patients (sCJD), as well as those with two familial forms of CJD (E200K and V280I); all were symptomatic at the time of treatment.  According to the abstract, the outcome evaluated was “survival time from the day of randomization.”  Sadly I had to leave the conference a few hours early to catch my flight, and missed the talk, but I caught up with Dr. Brandel earlier at breakfast and asked about the study’s general conclusion.  Here’s what he told me:

We have no difference in survival between treatment and placebo.

He added that, among patients with a slower disease course (presumably referring to 129MV heterozygotes?) there was a trend towards longer survival, but nothing statistically significant.

In the poster sessions, I also caught up with Henrike Manthey, who presented a poster on two German trials of doxycycline in CJD patients.  These included one open label trial (n=13) and one double-blind trial (n=56 treated vs. 89 control).   Open label means that there is no placebo control; patients who chose to receive doxycycline off-label from their physician were tracked. 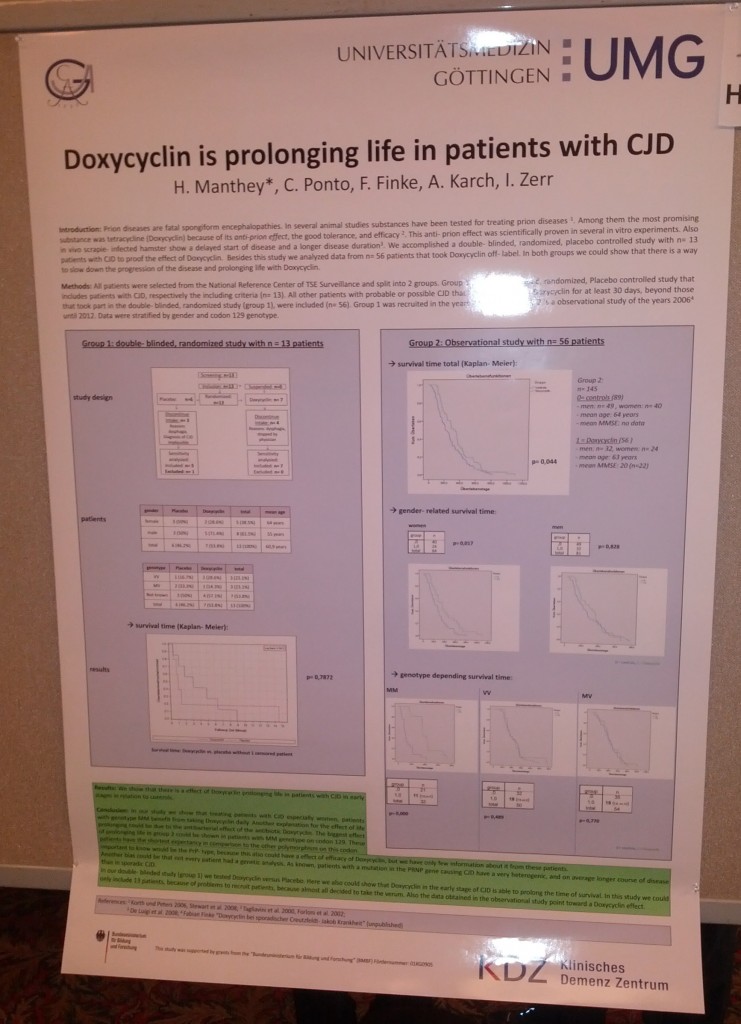 The title of Dr. Manthey’s poster was “Doxycyclin is prolonging life in patients with CJD”.  On the face of it, the randomized trial found a possibly-significant extension of life in the doxycycline group vs. controls (p = .044), a result driven almost entirely by 129MM individuals (p < .001) while 129MV and 129VV showed no trend.

But as we spoke more, I realized she was more cautious and skeptical than her poster would suggest.  She observed that the criteria for putting patients into the doxycycline versus control groups were not random.  Patients with very advanced disease had been excluded from the doxycycline group, because it was believed that prolonging the terminal stages of disease without any quality of life improvement would not be ethical.  In contrast, the control group of patients had not been filtered or selected by disease stage.  Therefore one can imagine that the doxycycline group may have simply been enriched for patients still early in their disease course, who still had more months to live regardless of any treatment.  Similarly, the open label patients were those who had chosen – or whose families had chosen – to take doxycycline.  This choice may select for patients with more remaining cognitive ability, or patients whose families still perceive a benefit to extending life.  Both of these criteria are likely to enrich for individuals early in disease course.

We’ll still have to see what comes out in the peer-reviewed literature, but based on the results presented at Prion2013 there does not seem to be any convincing evidence that doxycycline has any effect in symptomatic CJD patients.  That doesn’t by definition rule out the possibility that it could show an effect prophylactically, in the ongoing longitudinal study of fatal familial insomnia carriers treated with doxycycline. However, it does mean we’re back to having no human evidence for doxycycline’s efficacy in prion diseases – instead, all we have are the in vitro and mouse study evidence.

And that evidence isn’t the strongest.  True, it’s been shown that tetracyclines can reduce prion infectivity when co-incubated with infectious inoculum [Forloni 2002], and can inhibit or revert the PK resistance of PrPSc in vitro [Tagliavini 2000, Barret 2003].  But to my knowledge, tetracyclines have never come up as top hits in any unbiased screens for PrP-res inhibitors among approved drugs [e.g. Kocisko 2003, Poncet-Montagne 2011].  In vivo, doxycycline and its analogues prolonged survival when administered at the time of infection in peripherally infected animals or when administered intracerebrally at the time of intracerebral infection [Luigi 2008].  That’s far from a rigorous test of efficacy.  In an objective comparison of candidate antiprion compounds, doxycycline ranks fairly far down the list.