Often I find myself needing a quick reference on how highly expressed a particular gene is across different tissues, either to browse visually or to combine with other data in an analysis.  There are a few resources for this online:

These are some pretty cool tools, but they don’t always meet my needs.  For instance, I analyze RNA-seq data, so it’s nice to have RNA-seq data to compare to.  Sure, RNA-seq protocols and computational pipelines can differ a lot between one another, but at least it’s better than comparing RNA-seq to microarray.  I also like to have something I can download to merge with other datasets rather than picking out individual genes or looking at a graphic.

I was excited, therefore, when I found out about Human BodyMap 2.0, a fully public RNA-seq dataset across 16 human tissues brought to us by Ensembl and Illumina.  It doesn’t divide the brain into regions, but other than that, it’s a pretty awesome dataset.  Ensembl has provided aligned BAMs (a huge convenience) but no gene expression results.  So I set out to call gene expression levels from the BAMs for my own future use, and figured I might as well put the results online while I’m at it.

I downloaded the Ensembl BAMs, then used Cufflinks to call fragments per kilobase of exon per million reads (FPKMs), a measure of gene expression normalized to gene size and RNA-seq library size, and then used several Unix command line tools and R to combine and reshape the data.  Here is the full bash script I used.

A few notes and caveats:

Here is a 6 MB csv file of expression by gene symbol (52686 rows) and tissue (16 columns).   You can open it with Excel, but be warned, Excel will autoformat the gene symbols, corrupting any of them that look like they could be numbers or dates.  I prefer to work with it in R.  Here’s a trivial bit of R code to get you started opening up the file and plotting the FPKMs for one gene: 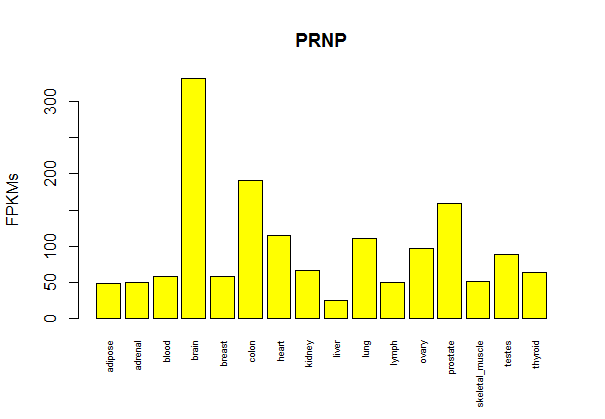