Armed with my new list of FDA-approved drugs and annotation as to which are CNS drugs, I set out to characterize the chemical space of CNS drugs as another exercise to learn a bit of cheminformatics.

I didn’t address this in my last post, but the method I used for defining CNS drugs basically amounts to whether they are licensed for a CNS indication. This isn’t a perfect proxy for blood brain barrier permeability, which is the property I am really interested in.  There are false negatives – plenty of drugs cross the blood-brain barrier yet aren’t licensed for any CNS-related purpose (say, simvastatin).  Emily Ricq pointed out there might also be false positives – drugs with a CNS indication that actually stay in the periphery and act in trans, though I haven’t found an example yet.  And of course, my list probably isn’t complete.  Still, my hope is that this list of CNS drugs might provide a pretty decent outline of what chemical space BBB-permeable drugs tend to occupy.

To do this, I set out to calculate a number of properties of each of the drugs on my list – CNS and otherwise – and then plot and examine the ranges of different properties along with some principal components.

As Rajarshi Guha pointed out last time, there’s no need to include every imaginable descriptor, and just using a handful of key physicochemical properties can be enough for a good analysis.

In casting around for a list of properties to start from, I noticed each ZINC catalog entry also has a link for “Properties”, a small tab-delimited text file (the extension is .xls but they’re not actually Excel files) with the ZINC id, SMILES and nine physicochemical properties.  These are defined in the ZINC paper [Irwin & Stoichet 2005] Here’s what each of those properties means:

In addition, the ZINC paper also lists several other properties which don’t appear in the downloadable Properties files but which nevertheless sound important [Irwin & Stoichet 2005]:

Unfortunately not all of these items appear to be available in the list of CDK descriptors.  The relevant descriptors I was able to find are:

Weirdly, net charge is not one of the available descriptors, but this is trivial to calculate from SMILES: total number of + minus total number of -. Still this leaves me without the desolvation energies, number of chiral carbons and double bonds, and number of rigid fragments.  If anyone has ideas of how to get these, let me know.

Then there’s the matter of which logP prediction algorithm to use.  As noted above, ZINC’s method is most similar to xLogP.  I was at first put off from using XLogP.XLogP because calling this descriptor on aminophylline threw a null pointer exception (minimum script to reproduce error).  I tried using ALogP.ALogP instead, but this often (38 = 2.2% of 1691 FDA-approved drugs) returns NA values, which I would need some way to handle for principal components analysis.  Then I read this excellent post by Rajarshi Guha ground-truthing different logP prediction algorithms, which stated that aLogP was vastly inferior to xLogP.  So finally I returned to xLogP and just threw out molecules that caused errors, using the same try-catch logic I was using to skip unparseable SMILES strings.

In the end, here’s the code I wound up with:

I began by plotting the molecular weight vs. xLogP: 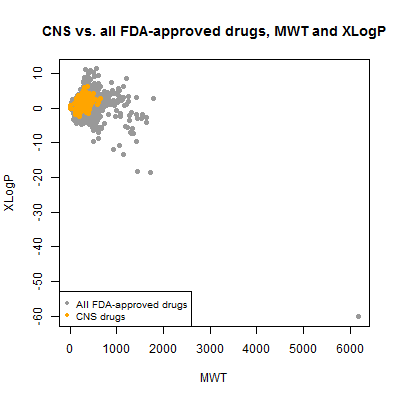 A single outlier has totally dominated the range of the plot.  Here’s where I’m glad I went to all that effort to have a table that matches common names to SMILES.  I can now ask, what is that thing?

It turns out to be inulin – not insulin, but a different thing. It’s a large sugary biomolecule used for monitoring kidney function.  Mind you, insulin would be twice as large again, at ~12 kDa.  But insulin, like most of the biologicals, was implicitly filtered out because DrugBank stores an amino acid sequence, not a SMILES string, for it, so I never parsed it and included it in the analysis.  There are plenty of therapeutic antibodies yet much larger than insulin and none of those are here either.  Since we’re not being exhaustive regardless, I decided to exclude inulin from the rest of the analysis to focus on the true small molecules.  With it gone, here’s what the plot looks like: 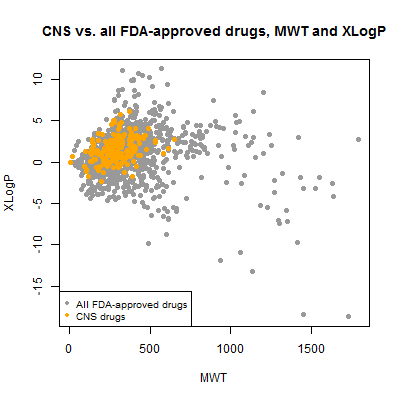 Now we can see that virtually all CNS drugs have a molecular weight less than about 600 Da and an xLogP between about 5 and -5.  Interesting that they’re of moderate xLogP in the scheme of all drugs – one often hears of CNS drugs needing to be relatively hydrophobic, but they aren’t the most extreme hydrophobes either.  But though I call this “moderate”, the range here is quite considerable when you remember that logP is the log of the ratio of concentration in octanol vs. water.  So a logP of 5 means there is 105 as much of the molecule in the octanol as in the water, and -5 means the converse.  That’s a big difference.

Among the non-CNS drugs, the spread is even starker – a few drugs have 1010 the concentration in octanol as in water, and vice versa.  I wondered which drugs these are and what they look like.

Here are the most hydrophobic drugs, with the most octanol-favoring partition coefficient: 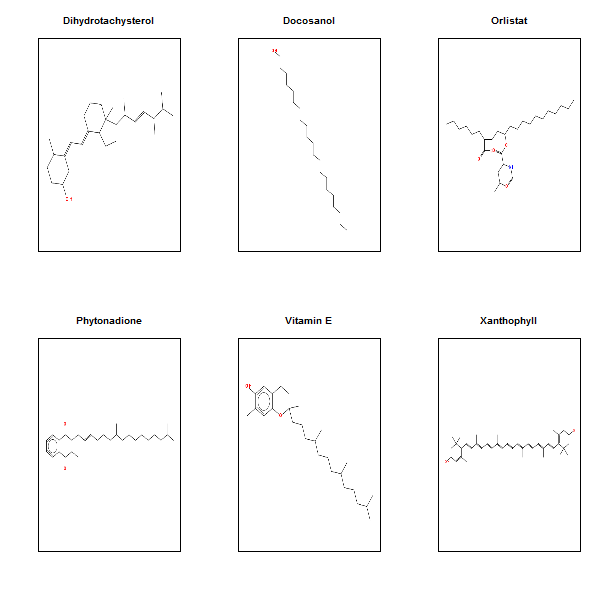 They’re almost pure hydrocarbon, with only an O or two here and there.  And the most hydrophilic drugs:

And here are the most hydrophilic ones: 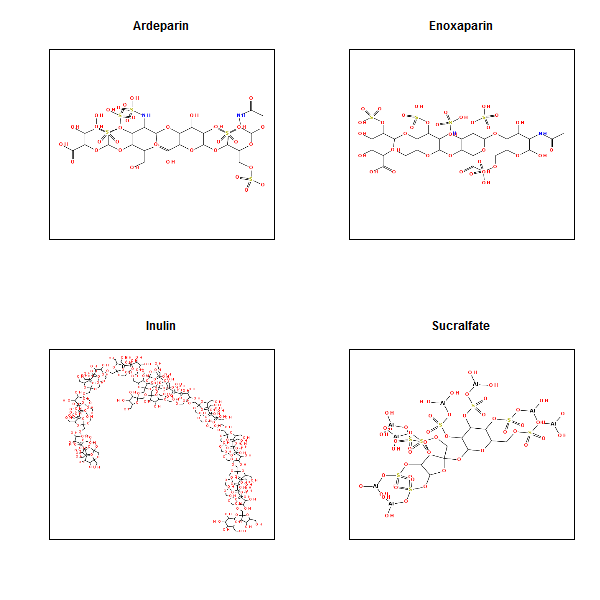 These are almost completely coated in polarizable heteroatoms.

Next I plotted tPSA vs. xLogP.  I would expect these to be correlated and they are, though the correlation is a bit noisier than I might have thought: 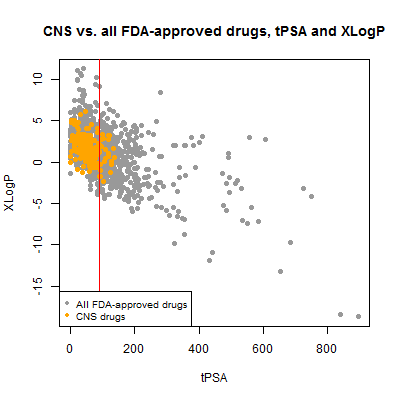 The CNS drugs certainly skew towards lower tPSA, though ~12% of them are above the 90 Å² threshold cited here and 3% (6 out of 221) are above the looser 120 Å² mentioned here.  Some of these might be false positives – nominally CNS drugs that aren’t actually BBB-permeable.  For instance, the highest tPSA was 136.22 Å² for meloxicam, an NSAID.  I didn’t find any data on BBB permeability but it has been investigated as a treatment for traumatic brain injury, where it has been suggested to help BBB integrity [Hakan 2010].  This could potentially be a proper CNS indication that doesn’t actually involve crossing the BBB itself.

Next I looked at hydrogen bond donors vs. acceptors.  Since both relate to size, I’d expect a correlation, and indeed, they have a Pearson’s correlation of .91. 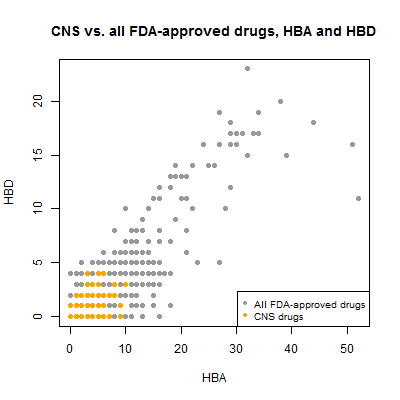 Recall that Lipinski’s Rule of Five suggests that drugs for any indication should have ≤ 5 hydrogen bond donors and ≤ 10 hydrogen bond acceptors. Many of the non-CNS drugs violate this guideline, but all of the CNS drugs obey it.

Molecular weight and number of rotational bonds were also highly correlated, with a Pearson’s of .83: 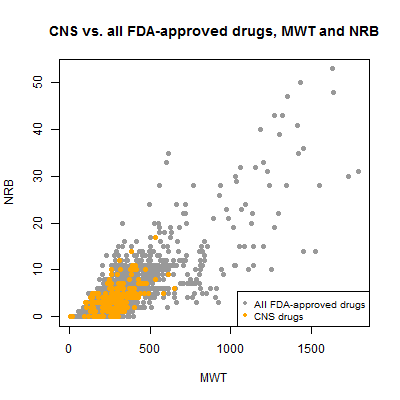 And one more surprise – though almost all CNS drugs (and all drugs generally) are neutral, a handful of CNS drugs (7 of them) do actually have a net charge: 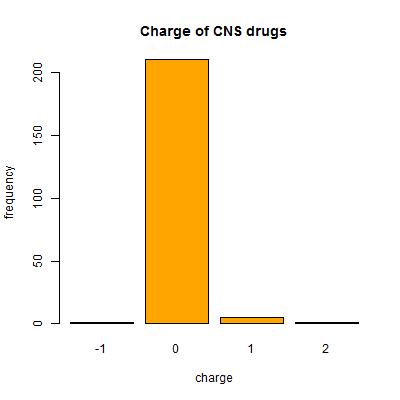 This list includes lithium (Li+) of course, as well as GABA.  Now, I’m not sure how much stock to put in these charge figures since charge depends for instance on the pH you’re assuming the molecule is at and therefore whether acids are protonated or not.  I know that ZINC uses a SMILES string chosen to represent a realistic state somewhere in pH 5 – 9.5 [Irwin & Stoichet 2005] but I didn’t find any info on how DrugBank chooses the protonation state of molecules that it represents in the SMILES strings.

Finally, I did a quick principal components analysis.  There are only a few descriptors here anyway, but I was still a bit surprised that the first two PCs explain 99.97% of variance; the other PCs didn’t seem worth looking at. 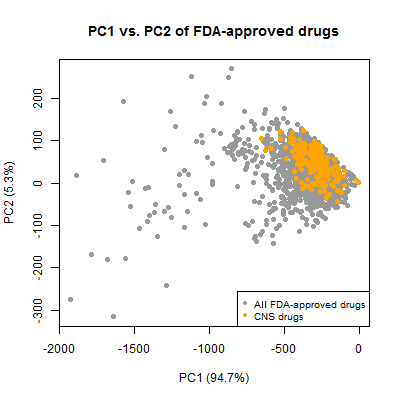 And again, the CNS drugs cluster together, occupying a considerably smaller chemical space than the set of all approved drugs.  This is all well-known information.  It’s exciting for me that I was able to reproduce this result with this simple dataset.