As a rare disease blogger, I have more than a little bit of admiration for Jeff and Ed at HDBuzz.net.  They communicate scientific progress to the public in plain language, with just the right mix of skepticism and hope.  While they’re optimists about the prospects for treating Huntington’s disease generally, they’re scrupulously conservative about what passes for scientific evidence, and over the years they’ve punctured many an inflated press release.

Therefore it’s with great interest that I’ve been watching their coverage of the efforts to develop a way to silence the huntingtin gene, HTT.  They’ve called gene silencing ”our best hope for an effective treatment”, and they were stoked at last year’s announcement of the Roche/Isis deal to combine Isis‘s antisense oligonucleotide (ASO) technology with Roche‘s money – $35 million of it – and Roche’s Brain Shuttle.  After many medicinal chemistry advances to address stability and distribution, Isis has now got ASOs which can last for a couple of weeks and actually get some appreciable concentration within many brain regions from a single injection site in the intrathecal space at the base of the spinal cord, and they have demonstrated therapeutic value in a few animal models of Huntington’s disease [Kordasciewicz 2012].  While the concentration in the more interior brain regions like the striatum and thalamus still isn’t quite what you’d hope for, they’ve got something promising here.  If only we could use the circulatory system to help get it distributed through the brain, and avoid injections into the spine while we’re at it…

So what was that about a Brain Shuttle?  When I Googled “Brain Shuttle” a few months ago, I found a few mentions about it on the web, like in this interview, but not a single word on what it actually was.  Finally, the mystery is over, thanks to a new paper in Neuron from Roche this past week [Niewohner 2014].

The Brain Shuttle, it transpires, is a new idea of how exactly to hijack the transferrin receptor (TfR) to get antibodies (or perhaps other large cargo) across the blood-brain barrier.  Mind you, people have been working on this general concept for a long time – just check out this awesomely old-school progress report from 1991.  It turns out that, cloistered though it is, the brain does actually need things from the outside world, and so we’ve evolved some shipping routes to get things there.  One of those routes involves a protein called transferrin which binds iron in the blood, then binds the transferrin receptor on one of the epithelial cells that make up the blood-brain barrier. TfR undergoes endocytosis, is transported across the cytoskeleton to the other side, and then exocytosed again, whereupon transferrin is released on the brain side of the barrier.

Genius, right? All we need is a way to hitch our own cargo to TfR for the ride. People have been trying to do that for many years now – see for instance one recent update in Yu 2011.  Roche’s breakthrough seems to be as follows: they figured out that having a monovalent antibody fragment (one “claw” of an antibody) bind to TfR gives far better results than bivalent fragments (two “claws”).  They conjugated either a single fragment of an antibody (sFab) against TfR, or a double fragment (dFab) to their desired cargo, which was a separate antibody against amyloid beta.  They found that the sFab-antibody complex got into the brain, while the dFab got endocytosed into the epithelial cells only to be degraded in the lysosome without (most of it) reaching the other side.

I will probably have to revise this diagram once or twice after someone writes or comments to tell me what I’ve got gravely wrong, but as far as I can tell from reading the paper, the situation looks approximately like this: 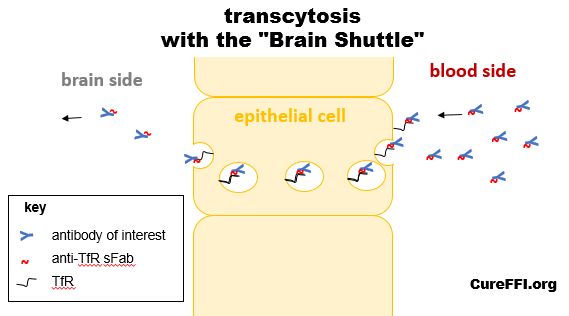 You inject into the bloodstream a load of your antibody (blue Y) fused to the anti-TfR sFab, it finds TfR on the blood-brain barrier epithelial cells, binds it, gets endocytosed, transcytosed, and pops out the other side where the antibody can be freed and go on to find its target.

How well does it work?  Roche claims they get 55x more target engagement – antibody-bound amyloid beta, that is – than with the naked antibody.  They cite a figure that 0.1% of naked antibody injected into the bloodstream will reach the brain [Podsulo 1994], so in theory they’re now getting like 5%. If that turns out to be for real, it will be a big deal for immunotherapy in the brain.

Right now it’s a bit early to say whether the Brain Shuttle will live up to promises, though the results in the paper certainly look good.  Ultimately, if it does work, it could be a big boost to antibodies for neurodegenerative diseases – like, say, PRN100, which is currently being proposed as a candidate for a clinical trial for sporadic Creutzfeldt-Jakob disease.

Curiously, the paper says nothing at all about how to use this technology to deliver other cargoes to the brain – in particular, ASOs.  When Roche and Isis announced their big collaboration on Huntington’s disease, Isis made a big deal of its having access to Roche’s then-mysterious Brain Shuttle.  Do they know something we don’t?  Or were they just talking big? If the Brain Shuttle is to be used for ASOs, one possibility would involve packaging the ASOs into some sort of liposome and then conjugating that to the sFab.  This sounds a bit further off than just antibody + sFab, and even that is still at a fairly early stage in the scheme of translational research (mouse efficacy work, no extensive safety or primate data yet).

Caveats aside, this is cool work and I’ll be very excited to see where it goes.  By the way: this stuff isn’t my area of expertise, so if I’m wrong about anything here, please let me know.