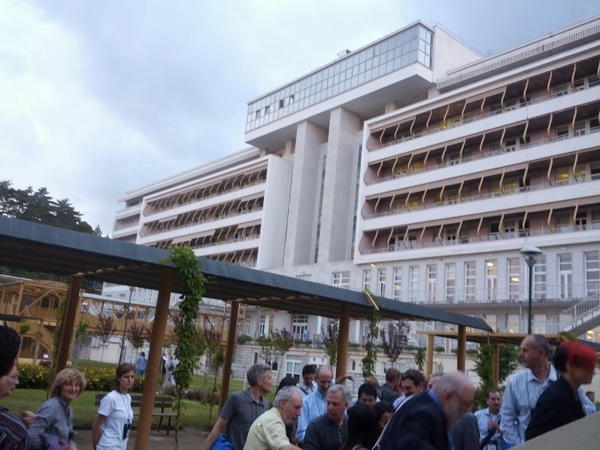 The first day of Prion2014 at SISSA in Trieste, Italy opened with back-to-back keynote lectures by Nobel laureates Stanley Prusiner and Eric Kandel.

Prusiner gave his standard talk about how all neurodegenerative diseases are caused by prions, plus some recent updates on his lab’s drug discovery efforts. If you’ve heard Prusiner speak before, this won’t be news to you, but I took some notes anyway.

Prusiner opened by defining neurodegenerative diseases ( and prions (“host encoded proteins that adopt alternative conformations, which are self-propagating”) and by presenting a list of diseases he considers to be prion diseases: 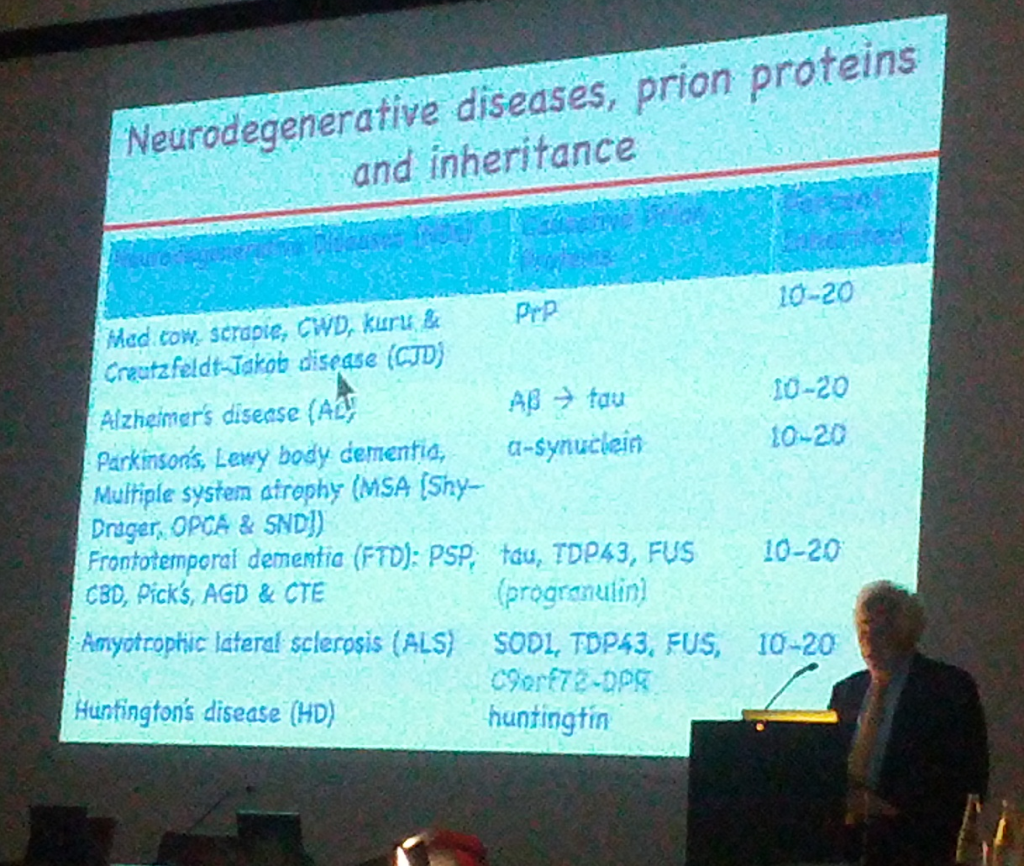 Huntington’s disease is the odd man out here, because it is 100% genetic, whereas all others are 10-20% genetic. In support of HD being a prion disease, Prusiner pointed to the relationship between HD CAG length and age of onset (citing Lee 2012) and argues that stochastic events triggering huntingtin prions to form are simply rarer in individuals with shorter CAG lengths. (Surprisingly, Prusiner did not mention the recent evidence of host-to-graft transmission of huntingtin aggregates [Cichetti 2014]).

With regards to Alzheimer’s, Prusiner argues that the original Gajdusek experiments attempting to transmit AD to chimpanzees were actually successful, as 2 of 18 familial AD cases transmitted (though Gajdusek chalked these up to contamination) [Goudsmit 1980]. Indeed, in later experiments with marmosets, transmission of sporadic AD, familial AD and Down’s syndrome) induced beta amyloidosis (though not necessarily clinical symptoms?) [Ridley 2006]. Prusiner further cited several recent efforts including those by Mathias Jucker [Meyer-Luehmann 2006] and by his own lab [Stohr 2012]. Prusiner also touched on some unpublished work by Joel Watts on maintenance of Aβ prion strain properties upon transmission [in press at PNAS]. He compared this to the landmark experiment showing that the PK-resistant fragment size in PrP prion diseases is maintained on transmission [Telling 1996]. Prusiner also described Alzheimer’s as a “double prion disease” since both Aβ and Tau behave as prions. In particular, he noted that Aβ can trigger Tau prionization (which I take as one possible explanation for the inefficacy of anti-Aβ therapies in clinical trials, though Prusiner made no such assertion).

Prusiner went on to discuss frontotemporal dementia and Tau prions. He briefly went over the evidence for Tau as a prion and then spent a while talking about the social impact of Tau diseases. He noted that FTD can be caused by traumatic head injury in boxers, athletes and soldiers and often manifests in behavorial changes that lead to psychiatrist visits. Only much later in the disease do patients reach the attention of neurologists, and are often misdiagnosed with Alzheimer’s. Autopsies are rare.

Onward to α-synuclein, Prusiner talked about M83 mice (which overexpress A53T mutant SNCA under the Thy1 promoter) as a valuable tool, and cited experiments on both the generation and the transmission of synuclein prions [Mougenot 2012, Luk 2012, Watts 2013, and some unpublished work extending on the latter].

Prusiner then transitioned to talking about therapeutics, and made a point of acknowledging Byron Caughey’s extensive work in this area before discussing his own lab’s recent work. He showed evidence for prions evolving drug resistance to IND24 and the fact that IND24 is effective in vivo against RML and CWD prions but not MM1 nor VV2 sCJD — all work which was presented as a poster at Prion2013 and is now published [Berry 2013]. Last year the Prusiner lab published its screening of 52,000 compounds [Silber 2013], and here Prusiner gave an update with new data on the leads which emerged from this screen – all unpublished work I don’t have permission to share here. He also talked a bit about efforts to screen for drugs against Tau prions.

Returning to the definition of prions, Prusiner said that whereas strains of living organisms all arise from differences in nucleic acid sequence, strains of prions can be encoded either in differences of amino acids (e.g. sCJD MM1 vs. VV2, Aβ40 vs. 42) and/or in conformation, and strain differences can arise in many ways, such as passage through a new host or treatment with an antiprion compound.

He ended with a plug for his new book, Madness and Memory.

Kandel’s talk was entitled Functional prions and the persistance of memory storage: a perspective. I got lost at a few points during it, but I’ll do my best to summarize here. He said there are two fundamental differences between prions involved in madness and prions involved in memory. The conversion of “madness” prions is spontaneous/unregulated, while the conversion of “memory” prions is physiologically regulated, including by neurotransmitters such as serotonin and gluocorticoid. Second, conversion of “madness” prions is lethal, while that of “memory” prions has an essential cellular function.

Kandel has used Aplysia as a model organism for neuroscience becuase they have 20,000 neurons instead of 100 billion in humans, with only about 40 of them allocated to specific behaviors. Aplysia can learn through sensitization, habituation, classical conditioning and operant conditioning. In sensitization, Aplysia withdraws its gill in response to a tactile stimulus it associates with a tail shock. All of the known paradigms of memory, including in humans, involve changes in CREB-mediated transcription. This creates a problem: if a neuron has 1000 synapses but only one nucleus, then how can transcriptional changes lead to a long-term change in only one synapse? He reviewed the discoveries that maintenance of synaptic facilitation requires local protein translation in the synapse [Martin 1998 (?), Casadio 1999]. This was explained by a neuronal-specific isoform of CPEB that had a Q/N rich domain. When CPEB was knocked down with ASOs, long-term facilitation was inhibited [Si 2003a, Si 2003b, Si 2010].

They next set up a yeast assay in which CPEB conformation determined a blue or white phenotype, and found that CPEB was monomeric in the white yeast cells and aggregated in the blue yeast cells, and was transmissible – in short, CPEB was a prion. Serotonin signaling increases the rate of aggregation of CPEB. In Drosophila, if a sexually inexperienced male has an encounter with a sexually experienced female and she rejects him, he remembers it for his whole life. But if you knock out the prion domain of Orb2a, the Drosophila CPEB homologue, that memory is lost [probably referring to Keleman 2007]. (Orb2a abundance, which is determined by its stability, which is determined by its phosphorylation state, is a major determinant of oligomerization [White-Grindley 2014].)

In mice, there are four CPEB homologues, but only Cpeb3 has a prion domain. Cpeb3 has all three defining properties of prions: it (1) aggregates into amyloids which (2) show SDS resistance and it (3) is heritable. Neuronal stimulation increases both the expression and aggregation of Cpeb3. In the basal state, CPEB is a repressor of translation of GluR1 and GluR2, and only when activated does it (something). Cre-mediated conditional knockout of Cpeb3 after mice have learned something causes them to forget it.

Cpeb3 is regulated by a protein called Neuralized which ubiquitylates Cpeb3, which enables it to recruit polyadenylation machinery to ribosomes near the synapse. Overexpression of Neuralized, or constitutive ubiquitylation of Cpeb3 increases the number of spines in cultured hippocampal neurons [Pavlopoulos 2011].

Kandel went on to talk about TIA-1, which is another functional prion in mammals [Gilks 2004] but I believe this was all unpublished