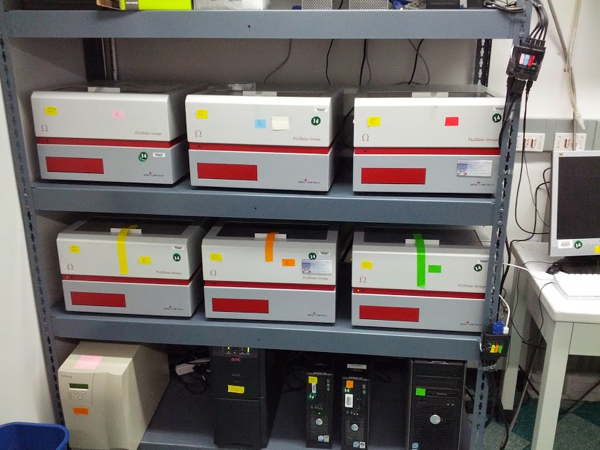 This month Sonia and I are in Hamilton, Montana to learn RT-QuIC under the auspices of Byron Caughey. We have been grateful for the extreme diligence and patience of Christina Orrù and Matteo Manca, who have walked us through every step at the bench. This post will go through the protocols used here as I attempt to understand the logic behind how everything is done.

Important disclaimer: as usual, content on CureFFI.org is not peer-reviewed and may contain errors. This post is intended as a helpful guide and not as an official protocol to follow.

The overall workflow is as follows: 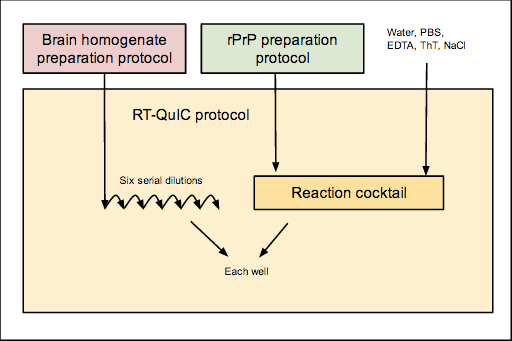 Here are the relevant protocols and other documents in use here:

I won’t repeat all the details of the above protocols in this blog post, but I do want to share a few tidbits that I hope will add value. First, I want to explain why each ingredient is present in the recipe. Christina Orru and Andy Hughson were very helpful in explaining this. In some cases there is an element of path dependence – we tried it once this way and it worked so we kept it – at this point, Andy has a pretty good idea of what each ingredient is doing, and has titrated each one down to see if it essential. Second, I’ll offer some details I observed on how people run the experiment in practice. Third, I’ll discuss some of the numbers involved in RT-QuIC.

In the brain homogenate preparation protocol, the process begins with brain samples homogenized in a buffer at 10% wt/vol, which means that for instance, .1g of brain gets homogenized in 1mL of buffer. Here are the ingredients in the buffer:

In a typical experiment, the seeding activity of the brain homogenate will be tested at six dilutions. The diluent is PBS with 0.1% SDS and 1x N2 media supplement. Here’s what those are there for:

The final reaction volume in each well in the 96-well plate for RT-QuIC is 100 μL. If you work backwards from the inputs listed in the protocol, you’ll find that the desired final concentration of everything in the 100 μL is as shown in the table below. The table also contains a brief note about the purpose of the ingredient, but some of these will be discussed in more detail shortly.

Here’s a bit more detail (mostly provided by Andy Hughson) on why some of these ingredients are present:

Note that rPrP is prone to oligomerize. For this reason, it is kept cold in separate aliquots until you are ready to use it. It is never vortexed. Prior to use it is filtered through a 100 kDa filter in a centrifuge at ~4000g to remove all higher multimeric species of PrP. rPrP is on the order of 23 kDa – see below – so this removes anything larger than a tetramer. Filters can be reused once (just once), but the sample may require spinning at a higher velocity the second time once the filter is partially clogged.

Here, everyone mixes the above reagents together into a “master mix” or RT-QuIC cocktail under the hood immediately before beginning the experiment. However, Christina Orrù noted that the PBS, EDTA, NaCl and diluting mQ water are all stable, non-reactive and can be stored at room temperature. Therefore many other labs that do RT-QuIC simply mix these four into one cocktail ahead of time rather than mixing them under the hood while setting up a plate. The main reason the Caughey lab has not taken this shortcut is that some of their experiments are still aimed at improving the protocols, which requires having more flexibility in how much of each thing you add.

When working under the hood, the arrangement of items is important to ensure you can work efficiently and avoid cross-contamination: 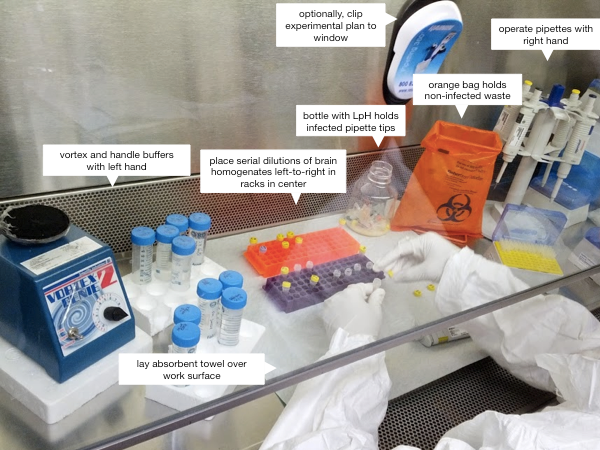 For mixing and distributing the buffer solution, the same pipette tip can be reused multiple times but should be discarded if the SDS is starting to form bubbles in or on it. Any pipette tip that touches brain homogenate samples should be used only once – they are not reused even for replicates of the same sample at the same dilution. When ejecting the sample into the buffer in the 96-well plate, it is more important to not create bubbles than it is to completely eject the solution, so you can use the pipette to wash the sample up and down a few times in buffer, but do not fully depress the plunger.

In terms of plate layout, they usually run everything in quadruplicate, running one sample on the top four rows of the plate and the other on the bottom four rows.

In the platereader, the current protocol calls for alternating cycles of 1 minute shaking and 1 minute incubating, and then 1 minute of fluorescence reading every 45 minutes. This 45 minute interval has proven adequate for all of their current needs.

We won’t be learning this protocol until next week, at which time I’ll either update this post or write a new one.

Everyone analyzes their QuIC data by copying it into an Excel spreadsheet which has formulas in place, and then laboriously renaming columns and selecting subsets of data to plot and changing colors and markers. The standard seems to be that serial dilutions of the same brain homogenate are depicted in the same color and line width but with different markers. Once I get some of my own data I’ll get to work on an R script to do the analysis and plotting.

Some musings on the numbers

While learning all this, I also wanted to get a hand on the numbers involved. The final reaction volume for RT-QuIC is 100 μL per well of a 96-well plate. Measuring seeding activity in one sample requires 6 wells for the serial dilutions. The 100 μL volume in each well contains 30 μL of a recombinant PrP (rPrP) solution which has been diluted to 0.1 mg/mL concentration. That means each well contains (30e-6 L)*(.1e-3 g)/(1e-3 L) = 3e-6 g (that’s 3 μg) of rPrP in 100 μL volume, for a concentration of 3e-6/100e-6 = 0.03 g/L. Recombinant PrP is unglycosylated and GPI-anchorless, so the sequence for rHuPrP, for instance, is:

Now, take for instance the 5e-6 dilution of brain homogenate, which is said to contain 500 fg/μL PrPSc. Of this BH, 2 μL goes into a well for RT-QuIC detection, meaning that the final concentration of BH in the well is a 5e-6/50 = 1e-7 dilution, with 10 fg/μL. 10 fg/μL means 10e-15/1e-6 = 1e-8 g/L. In vivo-derived PrPSc will be GPI-anchored, variably glycosylated and some combination of full length and beta-cleaved, so let’s just ballpark its molecular weight at 30 kDa = 30e3 g/mol. Therefore the concentration of PrPSc molecules in the well is 1e-8 g/L / 30e3 g/mol ≈ 3e-13 M. That means that at this dilution, the rPrP at 1.3e-6 M is detecting a PrPSc seed that is 7 logs less abundant than itself! And that’s just considering PrPSc molecules as monomers, which of course they aren’t – they’re aggregated, and the bioactive principle is really the “sticky ends” of the prion fibrils or oligomers, which are even scarcer.

Another observation is that if PrPSc is a ten thousandth of the mass of an infected brain, then a a mouse brain, which weighs about .4g, would contain 4e-5g of PrPSc, which at approximately 33 kDa would give us 1e-9 mol of PrP, or about 1e15 molecules. An infected mouse brain contains on the order of 1e8 ID50 of infectivity, so that would give on the order of 1e7 PrP molecules per infectious unit.