These are my notes from lecture 22 of Harvard’s Genetics 201 course, delivered by Steve McCarroll on November 12, 2014.

Why study genetics in humans as opposed to model organisms?

I would add population substructure as another con, at least for association studies, but Dr. McCarroll’s group has managed to make this an asset for other types of studies [Genovese 2013].

Facts about the human genome

How do human genomes vary?

The term single nucleotide variant (SNV) is preferred over SNP in many cases because it carries no connotation regarding allele frequency. Many people reserve the term “polymorphism” for things with an allele frequency over, say, 1%, while SNV could refer to somebody’s private variant.

Most alleles are bi-allelic, but that this depends on how many people you sequence.‡

Like SNVs, the bi- vs. multi-allelicness of indels depends on the number of individuals sequenced.

STR length variation is visible on gels, which is why historically they were more often used as markers (called “microsatellites”). In modern times, however, SNVs have become far easier to genotype. Currently a genotyping chip for 500,000 SNPs goes for $50.

An allele’s allele frequency is the allele count over number of alleles genotyped.

What does “wild-type” mean?

Human genomes have an enormous reservoir of functional polymorphism.

When compared to the reference genome, the average person has:

**The following SQL query on the ExAC data double-counts homozygotes but most variants in any one individual’s exome are heterozygous so this won’t be off by too much: 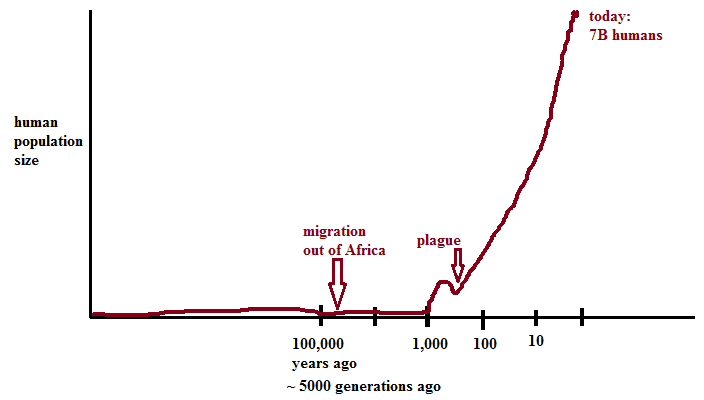 Ancient variation (pre-dating the out-of-Africa bottleneck) is mostly common today. These variants are found in millions or billions of people, on every continent. Such variation is limited - there are about 20M common SNPs. Such variation can be readily catalogued. These SNPs are readily genotyped on arrays and were phased in HapMap.

Recent variation is mostly rare - for instance, if the 7 billion people alive today have on average 50 de novos per genome there are 350 billion private variants. Such variants are accessible only by sequencing.

The vast majority of human genetic variants are rare. For example, 99% of ExAC alleles have allele frequency <1%:

Half of ExAC alleles are singletons, and ~99% have <1% frequency. From @dgmacarthur's talk at #ASHG14 pic.twitter.com/BbKjHQyPZx