These are my notes from lecture 21 of Harvard’s Chemistry 20: Organic Chemistry course, delivered by Dr. Ryan Spoering on March 30, 2015.

N-bromosuccinimide is a useful reagent: 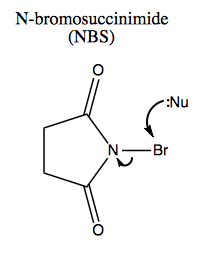 Together with methanol, it can add bromine and ether to an alkene:

The mechanism is as follows:

In the process, it can also cyclize things:

A lactone is a cyclic ester. Here is a five-membered ring example, though it could be any size ring:

NBS can be used to create bromated lactones from carboxylic acids, for instance: 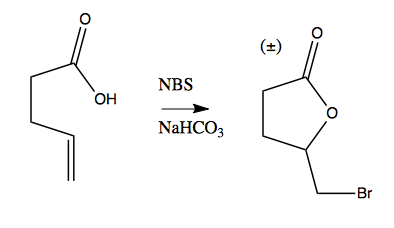 Ozone is a potent oxidant. It can be formed with an electrical arc in a stream of oxygen. Ozone can then be bubbled through a solution of an alkene. Ozone is a strong blue color in solution, and you’ll see the blue go away as it reacts with your alkene. You then keep bubbling it in until the blue persists, meaning all of the alkene has been reacted. It will break an alkene into two carbonyl compounds, like so:

The “workup” can be either reductive (with Me2S) or oxidative (H2O2), which determines whether you end up with (respectively) an aldehyde or a carboxylic acid at the end:

The reductive workup is almost always what’s used, because aldehydes are more useful synthetic intermediates than carbonxylic acids are.

The mechanism begins with dipolar cycloaddition followed by rearrangement to yield a secondary ozonide:

The mechanism of the reductive workup is then as follows:

In other words, you get the two benzaldehyde molecules out in two sequential steps, also producing DMSO as a byproduct.

Here are two surprising examples where ozonolysis is useful in synthesis: 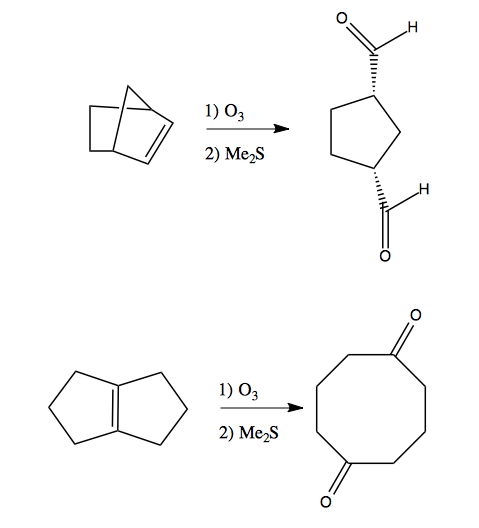 Sodium periodate (NaIO4) is used for cleavage of 1,2 diols. 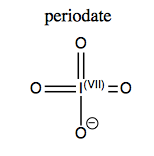 It is one alternate way (besides ozonolysis) to achieve the cleavage of 1,2 diphenylethylene into two benzaldehydes:

In the process of catalyzing this reaction, the iodine loses a double-bonded oxygen, gains a lone pair and thus changes its oxidation state from VII to V (a 2e- reduction of iodine).