These are my notes from lecture 6 of Harvard’s Chemistry 101: Chemical Biology Towards Precision Medicine course, taught by Dr. Stuart Schreiber on September 22, 2015.

Small molecule screens can be broadly grouped into two categories:

In an ideal world, experiments of nature, via human genetics, would tell us all the targets we need to hit, and exactly how we need to modulate their function. Then we could just do target-based screens for everything. For instance, it has been reported that APP A673V increases Alzheimer disease risk [Giaccone 2010] while A673T decreases risk [Jonsson 2012]. It is claimed that A673T APP is impaired in β-cleavage [Jonsson 2012], though the functional evidence for this is still debated. For the sake of argument, assume that this is correct. Then we just need to find a small molecule that mimics the effect that A673T has on β-cleavage.

In practice, though, we don’t know all of the targets, it is amazing how often we are humbled by the unexpected findings that arise from phenotypic screens.

Then there are methods that require labeling either the small molecule or the protein: 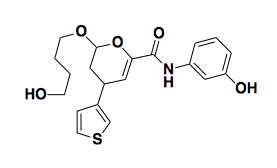 Above: haptamide B, an inhibitor of a transcription factor.

An NMR-based method involves looking for chemical shifts in NMR when your protein is exposed to a molecule. This requires very high concentrations of compound (like 1mM) and the hits tend to be extremely small structures, so it is often called “fragment-based screening”. You can use this method to find a fragment with some affinity, albeit not much, and then work to build it up in 3D space and find more potent analogues containing your original fragment.

Here are some examples of phenotypic screens. 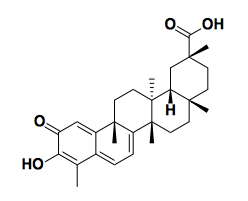 Above: celastrol, a natural product isolated from the Chinese medicinal herb 雷公藤 that mimics the gene expression signature of androgen deprivation in prostate cancer cells [Hieronymus 2006].

The ideal value is 1, indicating perfect separation. In practice that never happens. But if you have a Z’ ≤0 you have a very poor assay indeed.

Once you have identified a probe that is active in a phenotypic screen, how do you determine its mechanism of action? Here are some methods that have been used:

There are two main methods in quantitative proteomics — SiLAC and iTRAC. In SILAC (stable isotope labeling of amio acids in cell culture) you grow cells in regular media or heavy (D2O) media. In the light media, you pre-incubate cells with your compound. In heavy media, you do not pre-incubate. Then in either case, you expose cell lysates to beads conjugated to your compound. In light media, the target has already been bound, so should exhibit minimal binding to beads. In the heavy media, the target is unbound and should bind readily to the beads. Then you combine the beads, wash them, boil them in SDS, and then trypsinize the proteins that were bound. Any tryptic peptides from proteins that just non-specifically stick to the bead should be equally abundant in heavy and light space (distinguishable in your proteomics data by the mass shift due to deuterium). But your target should be vastly enriched in heavy space compared to light space. This method has been used to go back and figure out how specific various kinases are. For instance, Ro-31-7549, once believed to be highly selective for protein kinase C (PKC), has now been shown to have strongest affinity for PKC but to also bind many other kinases.

A hot new method is cellular thermal proteome profiling (TPP) [Savitski 2014]. This is a method to identify targets in whole cells. It relies on the idea that soluble proteins become insoluble when they are denatured. As you heat cells, proteins bound by compound will be stabilized and will have their melting points increased. So the target of your compound should be a protein whose melting curve is shifted up in the presence of the compound. You measure that melting curve by centrifuging the cell lysates after compond treatment and then measuring the abundance of proteins in the supernatant. This doesn’t work for membrane-bound proteins, which will pellet out regardless.

Addendum 2015-10-21: another method worth knowing is drug affinity responsive target stability (DARTS) [Lomenick 2009], where basically you look for proteins that become relatively more protease-resistant in the presence of the compound, because apparently often compound binding can do that.