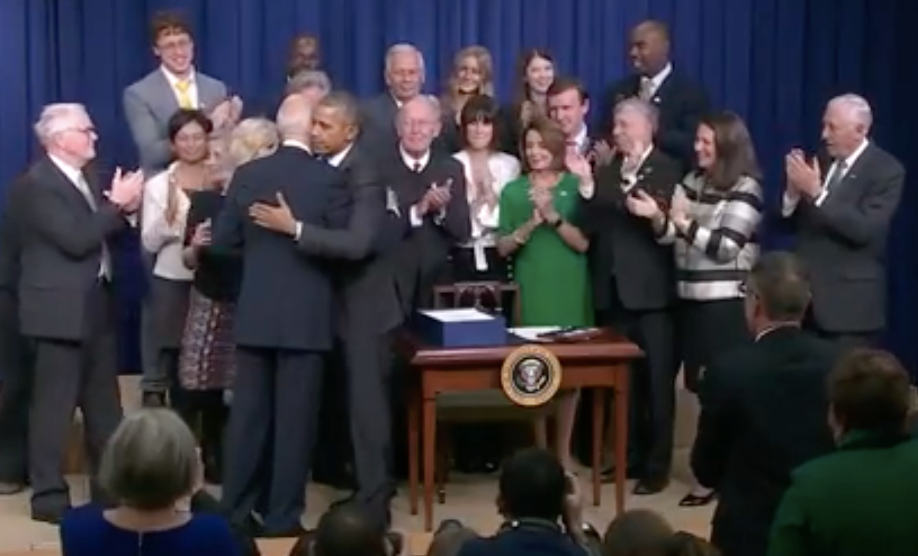 Today was a good day. After passing with overwhelming bipartisan support in the House and Senate, the 21st Century Cures Act became law. Sonia and I were honored to be there when President Obama signed the bill this afternoon, together with Vice President Biden and several members of Congress who had worked very hard for three years (!) on bringing about this legislation, including Fred Upton, Diana DeGette, and Lamar Alexander.

The event was, as the President noted in his speech, bittersweet. Chatting with the other patient advocates in the room before we all went on stage, Sonia observed that we were all there because of something we desperately wish had never happened. But bad health happens to everyone in time, it’s everyone’s issue, and it has been gratifying to see the overwhelming support with which this legislation passed.

So what’s in the 21st Century Cures Act? It’s 1,000 pages long, and there is a lot of different stuff in there. So although I’ve read the parts that closely concern me, much of what I know about the overall picture I learned from this helpful summary of the 2015 version (pretty similar to what eventually passed). The bill provides funding for NIH and for specific initiatives including the Precision Medicine Initiative, the Cancer Moonshot, and the BRAIN Initiative, and there is funding to the states for opioid addiction treatment. Most dear to my heart, the bill includes some important reforms to the way new drugs get evaluated and approved in the United States. I’ll try to offer my perspective on some of these reforms, with the caveat that I am far from being an expert on the drug approval process or the FDA. (I have a lot to learn, and you can expect more on this subject to appear here on this blog in time.)

The section of 21st Century Cures that I care most about is section 2022, concerning Accelerated Approval. The background here is that, traditionally, drugs have had to directly show a clinical benefit — some change in how a patient feels or functions — in order to be approved. Beginning in 1992, through the Accelerated Approval program, FDA began to become more flexible about this, allowing a sort of interim approval based on a biomarker-based trial endpoint, with a hard clinical endpoint reached post-approval. So for example, a drug that lowers viral load in HIV could receive Accelerated Approval on this basis, and the confirmation that this reduction in viral load indeed helps patients live longer could come years later. But in practice, Accelerated Approval’s impact on the pace of drug development for untreatable diseases has been tempered by the fact that most of the time, FDA has only accepted biomarkers that had already been validated to predict clinical benefit in a previous trial. Congress passed legislation in 2012 (FDASIA) which, among other things, urged FDA to make it easier to achive Accelerated Approval for severe, rare, untreatable diseases, but here too, the impact has so far been relatively modest. Today’s bill seems, to me, a welcome signal that Congress wants FDA to do more. One of the specific critiques of biomarker-based Accelerated Approval has been that FDA doesn’t evaluate a proposed biomarker until the end of a Phase II trial. Thus, drug companies that feel they can’t afford the risk that they waste millions of dollars showing that their drug can move a biomarker, only to find out that FDA won’t accept that biomarker anyway, might never invest in developing that drug in the first place. Emil Kakkis’s proposed solution to this is a biomarker pre-qualification program [Kakkis 2015]. Under his proposal, before spending the first dollar on discovering a rare disease drug, pharmas could go to FDA and get a determination on whether a proposed biomarker is valid, in all the specifics: what analyte, measured in what tissue by what method, would need to move what percentage, to merit approval. 21st Century Cures doesn’t quite go as far as Kakkis proposed, but it is positively a step in the right direction. The bill asks FDA to work with drug sponsors to develop an “Accelerated Approval Development Plan” detailing what endpoint will be assessed in a trial, how the trial will be designed, and what effect size will “be sufficient to form the primary basis of a claim that the drug is effective”. The only catch is that FDA is directed to do this only after the sponsor has submitted an Investigational New Drug (IND) application — which means usually after extensive preclinical and toxicity testing but before any human trials. So, unlike Kakkis’ proposal, drug companies will still need to take a leap of faith, investing in drug discovery and preclinical testing without a firm commitment from FDA. Still, since clinical trials are such a large fraction of drug development costs, I do think that moving this whole conversation from end of Phase II to right after IND is a big step in the right direction, and I hope that this will one day directly benefit Sonia’s and my quest for a drug for prion disease.

Another piece of the bill that I like is section 592, “Precision medicine regarding oprhan-drug and expedited-approval programs”. This section states that, in evaluating drugs for serious or life-threatening diseases, FDA may consider data from “a precision drug or biological product that is using the same or similar approach.” The language seems fairly open to interpretation (a topic I’ll return to later), but the way that most people seem to be interpreting this section is that, for precision therapies intended for people with a specific genotype, data can be shared to some extent across a class of drugs. Consider that nucleic acid-based therapeutics — antisense, RNAi, virally vectored gene delivery, someday CRISPR — are incredibly modular. If you can crack the nut of delivering the molecule of interest to a given tissue, then you can change the nucleotide sequence and thus the target of the drug, without changing too much else about how the drug acts. But until now, regulation hasn’t much accounted for this modularity. If a single atom in a molecular structure differs from an approved drug, then it’s a completely novel molecular entity, and FDA treats it like a whole new beast. The new bill arguably opens the door to the possibility that drug that’s identical to another drug except for nucleic acid sequence could benefit from some of the results of clinical investigation on the earlier drug. It’s not clear how far FDA will take this — can you change sequence to target an entirely different gene and still borrow at least a little bit of data from the earlier drug? Or perhaps you can only do this for different allele-specific drugs within the same gene? Or maybe only for single-nucleotide changes? How this will play out remains to be seen.

The bill also provides more funding for research, which is pretty much always a good thing in my book, and there are a few good particulars. NIH is authorized to give grants for studying the natural history of diseases, particularly rare diseases, which is incredibly important for paving a path to clinical trials. The bill also provides funding for the Precision Medicine Initiative, including NIH’s building of a million-person research cohort with genotypes, phenotypes, and ability to recontact. There are some FDA personnel reforms, intended to make it easier to hire and retain talent. There are various provisions for incorporating patient perspectives into the drug development process. NCATS gets expanded scope for conducting clinical trials. FDA is instructed to accommodate adaptive and Bayesian trial designs. The bill introduces a “Limited Population” designation for approving new antibiotics, which reminds me of a suggestion made by the President’s Council of Advisors on Science and Technology (they called it “Special Medical Use”) to overcome FDA’s aversion to the risk of widespread off-label use by allowing some drugs to be approved only for a specific populaton. And there’s the funding for opioid addiction treatment, cancer, the BRAIN initaitive, and many other provisions.

An overarching thrust of many parts of this bill is to make it easier and quicker to get new drugs approved for severe, untreatable diseases. Critics of the bill have pointed out that drug approval in America is already about as fast, or faster, than in other developed countries. But that does not mean that we’re fast enough. The United States can, and should, be a leader in getting new medicines to patients fast. I’ve also heard the critique that most of the reason it takes a long time to develop a drug is because drug development is inherently hard, and not because of regulatory barriers. Derek Lowe wrote: “I really don’t think that there’s this huge backlog of wonderful therapies piling up behind a big FDA roadblock.” To me, this misses the point. Regulatory barriers create a blockade much further up the pipeline, not at the stage of approval. Sonia and I have now met with people from tens of different pharma companies, always keen to see how we can get them interested in investing in our disease, and without fail, they always want to see that there exists a clear regulatory pathway to drug approval, before they spend that first dollar. The “huge backlog of wonderful therapies” isn’t sitting in FDA’s New Drug Application queue. It’s the drugs that no one ever developed in the first place. Or the drugs that were developed and tested and failed in symptomatic patients, when perhaps they could have worked if given earlier, on a preventive basis, where the regulatory challenges are greater. Empowering biomarker-based Accelerated Approval is critical for our ability to ever develop a drug for many diseases.

But I want to make a distinction here between what type of evidence merits approval, versus what quality of evidence merits approval. These are two orthogonal issues. In terms of type of evidence, FDA can demand hard clinical endpoints (people who get the drug live longer than those who don’t) or it can demand biomarker data (people who get the drug have the level of a protein or analyte go up or down). In terms of quality of evidence, FDA can demand rigorous trials (randomized, placebo-controlled, double-blind studies with pre-registered endpoints) or it can allow less rigorous approaches (non-randomized, natural history-controlled, with post-hoc analyses, and so on). There exists a 2x2 matrix of possibilities here. As a scientist, when I think about it needing to be easier to get drugs appoved, I am interested in changing the type of evidence demanded, without letting down our standards in terms of the quality of that evidence. (Though I acknowledge there is certainly a place for natural history-controlled trials, for example in post-marketing studies).

One thing is clear: a 1,000 page bill does not change an industry overnight. As others have observed, the bill’s language leaves a lot of latitude for interpretation, and implementing it will take years. Many of the details will be fleshed out in the form of FDA Guidances, which are open for public comment. So going forward, Sonia and I are going to be working hard on educating ourselves on how drug regulation works, so that we’ll be able to provide well-informed input on all this. The 21st Century Cures Act has become law, but there is much work yet to be done.