For those who haven’t heard, Adriano Aguzzi is on tour. A year and a half ago he received a scary-looking registered letter from a court in Zurich. After leaving it sit unopened on his desk for a few days, glacing at it periodically and worrying about what it might contain, he finally opened it. To his surprise, he found that it was not a scary legal document at all. The letter was from a lawyer, the executor of the will of Dr. Hans Salvisberg. Dr. Salvisberg was a talented and prominent internal medicine physician in Zurich who admired Aguzzi’s work, though the two never met in life. He developed Alzheimer’s disease some five years ago and, before passing away in 2015, decided to leave his entire considerable estate to Adriano’s lab at University Hospital Zurich. Adriano took this incredible donation as a moral mandate to do something truly great with the rest of his career. He therefore decided to spend his upcoming sabbatical year doing a series of 3-day “nano-sabbaticals”, visiting the best labs in the world to hear what other bright people are working on and to brainstorm. His tour has already taken him all over the globe, and I keep hearing from other prion scientists who’ve seen him. Today, I finally had the opportunity to see Adriano when he made an appearance in Boston, at the MGH Charlestown Navy Yards.

Aguzzi began his career in prion research with a question. When the BSE epidemic in the U.K. was beginning, he did some calculations based on the prevalence of BSE among British cattle, the number of infected cattle sold into the food chain, and the infectious dose determined from animal experiments. Based on this, he became afraid there might be millions upon millions of human deaths from vCJD. As it became clear that the human epidemic was in fact many orders of magnitude smaller, he became increasingly curious about why. In search of an answer, he focused on neuroinvasion: how do prions reach the brain from the periphery after ingestion, and what tissue types or biological processes promote or mitigate neuroinvasion?

His lab proceeded to work out many of the details of prion neuroinvasion, establishing the critical importance of B cells and complement [Klein 1997, Klein 2001] and the roles of bone marrow-derived cells and follicular dendritic cells in the spleen [Blattler 1997, Montrasio 2000, Krautler 2012]. In the periphery, inflammation is key to prion propagation, and organs that don’t normally propagate prions can become sites for prion replication if inflammation is induced, for example by viral infection [Heikenwalder 2005, Ligios & Sigurdson 2005, Seeger 2005].

His next question was why prion infection kills — why is prion formation toxic? He hypothesized that the toxic mechanism might be a perversion of PrP’s native funciton, so he next turned his attention to PrP native function, an area in which there had been many claims in the literature, but few clear answers [Wulf 2017]. He was able to show conclusively that at least one reported native function of PrP was in fact an artifact of residual linkage around the knockout allele due to back-crossing between different mouse strains [Nuvolone 2013]. One earlier report had mentioned demyelination [Nishida 1999], and over many years of work the Aguzzi lab managed to firmly establish the presence of a peripheral demyelination phenotype in PrP knockout mice [Bremer 2010, Nuvolone & Hermann 2016]. More recently, they’ve worked out the signaling pathway by which PrP promotes peripheral myelin maintenance, through the receptor Adgrg6 [Kuffer & Lakkaraju 2016]. Aguzzi opined that this is the only native function of PrP that is clearly established; all others should be taken with a grain of salt.

Aguzzi’s original vision for a therapy was immunological. But it proved very difficult to immunize animals against PrP, which is an extracellular protein expressed in the periphery and thus has strong host tolerance. He instead produced a proof of principle, by transgenically expressing an anti-PrP antibody in B cells, that passive immunization could be effective against peripherally acquired prion disease [Heppner 2001]. Aguzzi’s protege Magda Polymenidou eventually embarked on a quest to develop a large battery of antibodies against every possible epitope of PrP [Polymenidou 2008], which sounds boring but has led to some really profound discoveries. Some antibodies to PrP cause spontaneous neuronal loss in brain slices and in mice, while others do not [Sonati 2013]. Aguzzi believes that this is a mimetic of prion neurotoxicity (see the N-terminal toxicity hypothesis). He has more recently shown that this toxic phenotype is also reproduced by expressing the N terminus of PrP fused directly to the GPI anchor with no C terminus [Dametto 2015]. Aguzzi made a general point that not all epitopes are created equal and that, probably for any target and not just PrP, one must be very careful about which epitope is being targeted. He then spoke about his ongoing study panning for anti-PrP autoantibodies in human blood [NCT02837705].

The final portion of Aguzzi’s talk summarized two unpublished studies that I don’t have permission to blog about here. 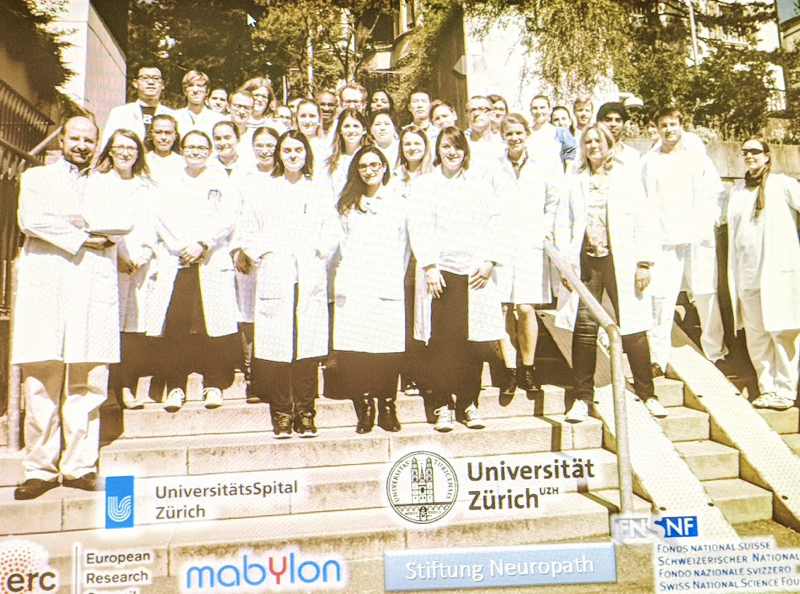