Poncet-Montagne 2011, of UCSF, brings us the results of a 2,160-compound screen for antiprion molecules with a (perhaps) surprising conclusion: all the molecules found to exhibit antiprion properties do so through third parties.  None interact directly with PrP.

The methods for this screen are described in quite a bit of detail, which I took as a chance to learn how a high-throughput assay for prion therapeutics can be designed.  The screen, which included “known drugs, bioactives, and natural products” (presumably MSDI’s Spectrum Collection), was conducted at the Small Molecule Discovery Center, UCSF’s high-throughput screening facility.  The initial screen used mouse neuroblastoma cells (N2a cells) infected with RML prions (this combination is called ScN2a cells) in 96-well plates, coincubated with candidate molecules for 5 days.  The negative control for each compound was ScN2a cells treated with DMSO, in which the tested compounds had been solubilized; the positive control was ScN2a cells treated with quinacrine.  The overall screening methodology is called ELISA and had been described for ScN2a cells in an earlier screen done by the same lab [Ghaemmaghami 2010]; the full workflow for the assay is in Fig 1A from that 2010 study.  So it took some digging, but basically the readout from this assay is as follows:

For each compound, cytotoxicity was measured by a calcein-AM assay, and the effect on PrPSc levels was detected by ELISA following PK digestion and PTA precipitation.

So basically, the ScN2a cells were coincubated with the compounds for 5 days, then subjected to proteinase K, which should digest PrPC but not PrPSc, and then immunoblotted with anti-PrP antibodies to get a visual readout as to whether PrP was still present.   The images were analyzed using ImageJ (they don’t say exactly how, but here’s an example of using ImageJ on Western blots).  So that’s the readout: the less PrP is still present after proteinase K digestion, the less PrPSc there must have been, and so the better the compound’s antiprion properties.  So the outcomes of this screen are only translatable into therapeutics to the extent that proteinase K resistance correlates with infectivity and toxicity.  I understand that this correlation is fairly strong but not absolute– I’m still looking for a citation that discusses the issue in more detail.

As an aside, I found it curious that the screen used quinacrine as a positive control.  This implies that quinacrine’s antiprion properties are so well-established that they are actually the standard by which to judge other compounds. I don’t know how to square this with the fact that Barret 2003 showed that quinacrine’s antiprion activity was less than that of tetracyclines.  It is also peculiar that quinacrine works so well in vitro yet ultimately failed clinical trials [Collinge 2009].  Hopefully more on that in a future post.

Now, what I just described above was just the initial discovery assay as best I understand it.  A “hit” was defined as “a compound that reduced PrPSc load by 40% with less than 20% cytotoxicity” — i.e. it both works and doesn’t kill the cells.  The assay of 2,160 compounds yielded 206 hits, which largely overlapped with the hits from another screen by Kociscko 2003.  206 was too many to follow up on, so the authors randomly chose 40 of the 206 compounds.

These 40 compounds then went through the same ELISA screening protocol again and 16 of them passed it again.

So then came the question, what exactly are these 16 compounds doing?  The authors had a whole battery of tests to try to assess this.  Here is an incomplete list:

So those were the experiments.  Here are the 16 molecules: 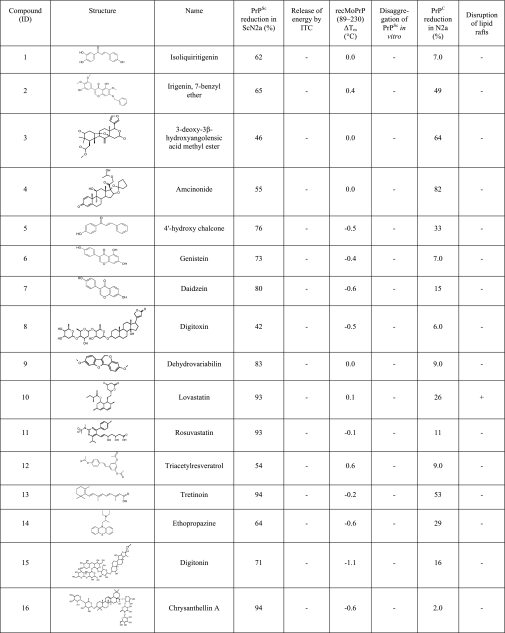 The authors haven’t yet reported any in vivo validation of these 16 hits, so it’s on the early side to get hopeful that any of these compounds could be used as prion therapeutics.  But what’s really interesting from this screen is the finding that maybe direct interaction with PrP is  not the route to drug development.  In fact, the authors even question the idea that any compounds previously identified by other studies really directly interact with PrP in a way that is specific, reproducible, and highly affine.  They think this idea of direct interaction with PrP is a dead end and that assays focused on direct interaction hold little promise:

The results are consistent with the reported crystal and NMR structures of PrPC, which indicate the lack of prominent structural clefts capable of ligand binding (32–35). Various compounds have been reported to bind PrPC in vitro. However, these interactions have been shown to be nonspecific (e.g. anionic tetrapyrroles (48)), irreproducible in alternative binding assays (e.g. Gn8 (10)), or have millimolar affinities (e.g. quinacrine (49)). More recently, it was reported that a cationic tetrapyrrole (Fe(III)-TMPyP) can specifically interact with the folded domain of human PrP with micromolar affinities, although the large size of the compound may preclude it as an effective brain-permeable clinical therapeutic (50). The results of our study suggest that a drug-discovery screen focused on the identification of specific PrP-interacting molecules, e.g. protein X, is unlikely to identify many efficacious compounds.

Instead, antiprion compounds are likely to act through a third party molecule or “protein X”:

In protein aggregation diseases, including prion diseases, a common target for pharmacological intervention has been the aggregating molecule itself (46, 47).  Although we were able to identify 16 nontoxic compounds that were active against prion formation in cell culture, none of the 16 molecules interacted with PrPC or PrPSc in vitro, as evaluated by various biophysical techniques. These observations imply that at least one other cellular target (protein X), likely several given the diversity of the active molecules, modulates PrP conversion within the cell.

This idea of a “protein X” which is involved in prion formation interesting.  If true, then genetic variation in the gene coding for such a “protein X” should be a significant modifier of prion disease.  For instance, homozygous loss of function mutations in protein X might render someone resistant to genetic prion disease.  Or variants which increase the affinity of protein X for interaction with PrPSc might be risk factors for sporadic prion diseases.  Yet as mentioned in the GWAS post, genome-wide association studies have yet to identify any risk factors for prion disease other than, of course, loci within PRNP itself.

This also leads me to the question, would “protein X” be the same for different prion diseases?  Perhaps different proteins would have different affinities for different misfolded conformations of PrP, or perhaps the different strains have different levels of dependence on things like lipid rafts which protein X could be involved in indirectly.  CJD, FFI, and GSS each have different patterns of pathology across the various brain regions, different signatures in terms of plaque formation and vacuole formation, and so on.  Roles for multiple different “X” proteins could be one explanation.  If so, then antiprion therapeutics might not always translate well across prion strains, but

In concluding, the authors identify a couple of mechanisms for potential antiprion therapies based on their results.  They remind us that PrP knockout mice are resistant to prion disease and point out that compounds like amcinonide which increase degradation of PrP could have therapeutic value.  They also discuss the two statins — lovastatin (Mevacor) and rosuvastatin (Crestor) — in their hit list and the potential role of lipid rafts as necessary for prion formation.  This notion of statins disrupting lipid rafts and therefore prion formation is difficult to reconcile with the fact that the four studies on statins I reviewed last week generally seemed to conclude that the mechanism of action of statins on prion disease did not involve cholesterol and, moreover, that mice treated with statins actually had more PrPSc than untreated mice at the time of death. update 2013-05-24: it’s actually more complicated and hard to draw conclusions about mechanism of action from those studies, see this new post.  For what it’s worth, these are different statins than tested in those studies.  I dug up the compound list for MSDI’s Spectrum Collection, which has since grown to 2,320 compounds, and it does include both simvastatin and pravastatin.  These are old enough drugs that I am assuming they were also in the 2,160 initially screened in this study.  I’d be curious whether they were some of the 206 initial hits that just didn’t get randomly selected for followup.

As for the other 13 compounds, they state that we really don’t know the mechanism of action, other than it’s probably not direct interaction with PrP.

All in all, the 16 hits validated here are a pretty interesting mixture of FDA-approved drugs, herbal compounds, and experimental compounds:

Again, it’s an interesting list but remember these were merely the hits from an in vitro screen with no in vivo validation yet.  This blog does not provide opinions on the efficacy of any medical treatment and nothing said here should be construed as medical advice.