I have previously described how to aggregate data from FastQC to check the quality of raw reads from next-generation sequencing, and my GATK exome sequencing pipeline covers how to use bedtools to calculate coverage after alignment.  After you’ve completed the pipeline and called variants, you still need to see if the variants you’ve called look reasonable.  This post will introduce the descriptive statistics generally used to assess the quality of variants called from exome data.

Emond’s cystic fibrosis exome paper specifically calls out the following metrics for that study’s exome variants in the supplement: 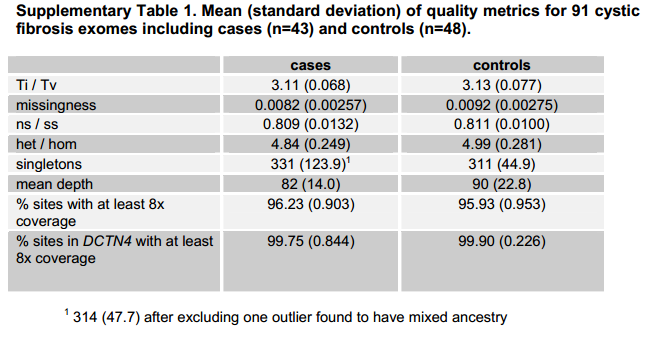 What are all of these metrics?  I had to look most of them up.  Here are some definitions (as best I understand):

It’s probably good to compute all of these figures on your variants before proceeding to downstream analysis and modeling.  If you notice that any numbers are far from what you’d expect, you probably have some errors upstream that are going to mess with your analysis. The PLINK/SEQ stats module can compute most of these measures for you, and a few others as well, in under a minute with a single command line:

If you want to separate out your cases and controls as Emond did, you’re probably best off just using a mask, as follows:

PLINK/SEQ does not compute ns/ss or het/hom.  Luckily these are pretty trivial.  If you have your variants in a SQL database according to the table schemata from my GATK exome pipeline, here’s a query for het/hom:

You’ll notice the subquery allows multiple rows per variant, which I consider to be correct — if a variant can have either a synonymous or nonsynonymous effect depending on the transcript, it should count towards both categories.

One other thing you might be interested in is how many of your variant sites were sequenced at what depth (as opposed to how many of all sites).  There are a few different ways to approach this:

update 2012-10-17: as an alternative or supplement to PLINK/SEQ, vcftools stats modules can also compute most of these metrics, plus per-individual heterozygosity measurements (presumably to detect admixed or inbred individuals), Hardy-Weinberg Equilibrium by site, and a few others.

update 2012-10-22: Though I still can’t speak to how many singletons your samples “should” have, I did some calculations to see how it depends upon the number of samples.  I have 50 samples, so I calculated the number of singletons in different-sized subsets of them to find a curve.  Here’s how I did it:

First, I used a few lines of Python code to generate command line calls for PLINK/SEQ for 5 samples, 10 samples, etc.:

And tried a few different models.  The model with the most explanatory power (R2 of almost 99%) was singletons proportional to log number of samples:

I have 50 samples, and on the face of it, my number of singletons (58,557) had seemed rather elevated to me: almost 1200 singletons per person, compared to ~300 in Emond’s paper.  Armed with this new model, I checked whether my results were really that different.  Plugging in the slope and intercept from above, I can predict that if I had 91 samples (as Emond 2012 did), then I’d have (16419+10895*log(91))/91 = 720 singletons per sample.  To adjust this a bit further, Emond states in online methods that three different exome capture kits were used, targeting 26, 32 and 34 Mb. She doesn’t state the relative proportions, so I just chose to assume that her singleton counts correspond to the middle value of 32 Mb.  By contrast I am working with a little over 48 Mb, so I’d expect 1.5x as many singletons.  720/1.5 = 480.  So the most appropriate comparison to Emond’s 300-odd singletons is a number around 480.  While this is a bit elevated, it’s not nearly as bad as 1200.  It might be partly that I have some spurious variant calls, and/or partly the result of a more diverse population.

update 2012-11-12: I discovered that PLINK/SEQ and snpEff compute the ts/tv ratio differently from each other. I suspect some of the difference is in whether variant, or sample-variant, is the unit of analysis.  But neither product’s documentation explains exactly what it is doing.  So I wrote my own SQL query for ts/tv to be sure that I know exactly what I’m getting:

And once you’ve got this, it’s also easy to check for only coding regions if you want: