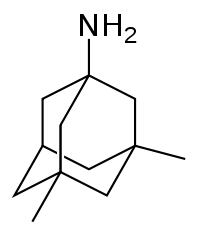 Memantine (above) represents one possible prion therapeutic.  Riemer 2008 tested five different drugs in scrapie-infected mice, the other four of which I’ve already discussed in other posts: ibuprofen, dapsone, minocycline, and curcumin.  But of all the drugs Riemer tested, memantine looked the most promising, as seen in the summary table.

Memantine was first synthesized way back in 1968, though like most drugs that act on the central nervous system, we didn’t actually know how it worked yet.  For an accessible and well-written review and history of the drug, see Lipton 2004.  In the 1990s memantine was discovered to be a weak NMDA receptor antagonist, meaning it inhibits excitatory glutamatergic signaling in the brain.  I say “weak” to mean that it’s not like one of these  pufferfish poisons that binds to an ion channel so strongly that it prevents the nerve from functioning and kills you.

Indeed, the “weakness” of memantine as an NMDA antagonist is why it’s useful.  Excitotoxicity is part of the pathology (though not an underlying cause) of many neurodegenerative diseases including Huntington’s and Alzheimer’s, and Lipton explains why memantine can reduce this excitotoxicity without preventing normal synapse function: memantine is “an uncompetitive open-channel blocker with a dwell time/off-rate from the channel that limited pathological activity of the NMDA receptor while sparing normal synaptic activity”.  So the hope is that, while memantine may not prevent an accumulation of misfolded proteins that underlies neurodegenerative disease, it can help spare neurons from death by overstimulation.

And apparently there is some good evidence of an effect in Alzheimer’s disease, though mostly in moderate to severe cases and not as much as a preventative measure or a treatment for mild cases.  For a trial in a couple hundred Alzheimer’s patients see Reisberg 2003.

There is some evidence of a role of excitotoxicity in prion disease as well – Riemer cites Scallet & Ye 1997.  For some more recent work see Steele 2008.  Steele thinks that part of PrP’s native function is to dampen NMDA signaling.  His argument rests heavily on Khosravani 2008‘s experiments showing increased NMDA signaling in neurons from PrP-null mice.  If true, this story would jive with evidence that PrP knockout mice may have increased susceptibility to seizures [Walz 1999].   Concluding, Steele speculates about implications for pathology in prion disease – is a partial loss of function of PrP, leading to toxic levels of NMDA signaling, part of the pathogenic process?  We don’t really know yet.

But promisingly, Riemer finds a small but highly significant delay in onset of symptoms in scrapie-infected mice treated with memantine.  These mice were infected intracerebrally with 10-3 brain homogenate of 139A prions and they were treated with the drugs orally, and not until 100 days post-infection (dpi).  All this makes for a powerful mouse model: if a molecule works in this model, you can be quite sure that it reaches the brain, acts in the brain, and is effective against a well-established prion infection.

The mice received 30 mg/kg/day of memantine.  Riemer cites Jin 2006, an Alzheimer’s mouse study, as the basis fro this dose.    It’s equivalent to 30 * 3/37 * 70 = 170 mg/day for a 70 kg person.  That’s a pretty enormous dose: according to Medscape, the indicated dose for Alzheimer’s in people is 28 mg/day, and even that you have to build up to, starting at 7 mg/day; drugs.com disagrees, recommending no more than 20 mg/day.  At least it looks like adverse effects of memantine are not too common or devastating.

The patent status of memantine (commercially, Namenda) is a bit confusing.  The original patent from the 1960s is long gone, but it appears that no generics are available in the U.S.  Duncan Curley has an article on GenericsWeb discussing the controversy over “new rights for old drugs” and whether memantine can legally be patented for new indications even though the molecule is not new.  Curley’s discussion focuses on Europe; I can’t find any good references on the U.S. legal status.  MedTV claims that the patent will expire in 2015 but has no citations for this.  If anyone has a better source of information on this, let me know.