Several recent advances in imaging of asymptomatic mice and humans offer the possibility that the progression of prion disease can be detected before symptoms arise.

Tamguney 2009, of the Prusiner lab at UCSF, presents the first use of Tg(Gfap-Luc) mice in prion disease research.  Let’s dissect that terminology: Tg = transgenic, Gfap = glial fibrillary acidic protein, luc = luciferase.  These mice express a transgene of luciferase under the Gfap promoter, so that astrocytic gliosis, which occurs in response to prion infection, can be detected in the live animal via the number of photons emitted by the bioluminescent reactions that luciferase catalyzes.  This works because Gfap– and thus anything under its promoter– is upregulated during astrocytic gliosis.

I’d heard about this approach before and mentioned it in the post on FFI knock-in mice, but I hadn’t realized how advanced the technology was until I read Tamguney’s paper.  Tamguney took Tg(Gfap-luc) mice and inoculated them intracerebrally with RML prions, then imaged them and monitored their behavior to see if prion disease could be detected through bioluminescence imaging (BLI) before it could be detected through behavior.

Sure enough: the mice showed a huge spike in luminescence about 55 days post infection (dpi) even though no behavioral symptoms were noted until closer to 120 dpi.  So BLI made it possible to detect the disease in about half the time.  What’s more, BLI was at least as good a predictor of prion titer (measured experimentally by infectivity in transmission to other mice) as neurological symptoms were.\ 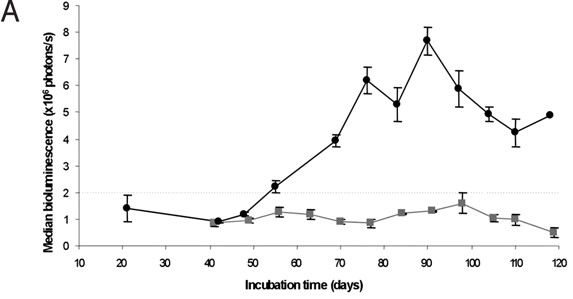 Fig 1B-C shows the mice being imaged at 48 dpi and 55 dpi – you can notice the increase in bioluminescence in the mice at right. 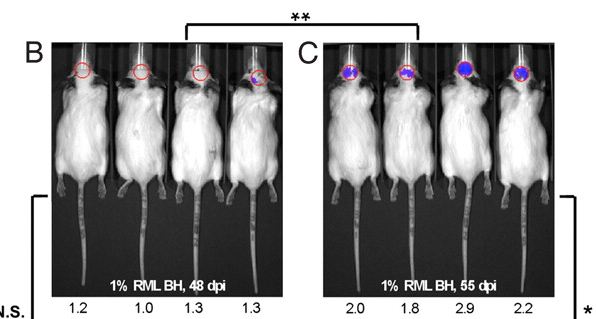 And all this was done with the mice being alive.  The imaging is entirely noninvasive: the luminescence is of infrared wavelengths that travel right through the skull.  Tamguney used the IVIS Spectrum for imaging.

Stohr 2012, also of the Prusiner lab, has already applied this technology to monitor the spread of Alzheimer’s in the mouse brain and provide the best evidence to date that Aβ spreads like a prion in the brain: proteins inducing other proteins to take on a toxic conformation.  So live animal imaging with BLI is real and is helping good science move faster.

So far no one has crossed Tg(Gfap-luc) mice with genetic prion disease mice (or if they have, at least they haven’t published it) so we don’t yet know how much it will speed up the potential readout from a study in genetic mouse models.  Tamguney’s mice exhibited bioluminescence 50% earlier = 2 months earlier.  In a mouse model that takes 12 months to develop illness, maybe you’ll see reactive gliosis via BLI at 6 months or maybe you’ll see it at 10 months.  Either way, BLI promises a speedier readout than waiting for observable symptoms and, what’s more, lets you see what’s going on in the brain in real time, something that hasn’t really been possible before. The one caveat for therapeutic trials will be that you might get a false positive from something that suppresses gliosis without actually slowing the disease.   Monitoring behavior and/or temperature and looking at neuronal loss post-mortem may continue to be important readouts as well.

Other recent advances may help us detect disease progression in presymptomatic humans as well.  Reports have begun to trickle in that diffusion-weighted imaging, a type of MRI, can pick up signals of prion disease before any symptoms arise.

Diffusion weighted imaging (DWI) is a subset of diffusion MRI.  I’ll try to summarize how I think it works, to check my understanding.  Regular MRI uses a homogeneous magnetic field.  Diffusion MRI uses a gradient, and one pulse is followed by an equal-but-opposite pulse.  Now a proton that hasn’t moved between the two pulses gets equal pulses in both directions, while a proton that did move gets hit with a slightly different part of the gradient he second time, so the pulses are not equal.  This produces contrast according to the rate of water molecule diffusion, which can be picked up as MRI signal.  So DWI is a way of measuring how freely water molecules are flowing in the brain– each voxel’s intensity represents an estimated rate of diffusion.

This idea, which has been around for decades, has proven hugely useful in neurology.  Strokes result in areas of restricted diffusion, which can be pinpointed with DWI.   Now evidence is beginning to trickle in that DWI may be useful in prion disease as well.

Vitali 2011, of the Geschwind group at UCSF, found distinctive signatures of sCJD using DWI and FLAIR (another type of MRI).   In general, sCJD is associated with, among other things, gray matter hyperintensities in the neocortical, subcortical and/or limbic regions of the brain.  Comparing DWI and FLAIR images made it possible to distinguish prion diseases from non-prion neurological disorders with pretty high specificity and sensitivity (they list 4 distinguishing features in the Discussion)

Vitali also looked at a smaller number of genetic prion disease patients and saw the same trend.  Mutsukura 2009 also provides a report of DWI for three V180I fCJD patients in Japan, noting that the patients all exhibit:

extensive cortical hyperintensity lesions. Hyperintense signals in the bilateral caudate nucleus and putamen are also demonstrated, but these are subtle compared with the cortical lesions. Medial regions of the occipital lobes are not involved.

So hyperintensity in the cortex is probably a feature of both sCJD and fCJD.

These studies both looked at symptomatic patients.  But a trickle of evidence suggests that some changes might be detectable even in asymptomatic carriers of genetic prion diseases.  One MC Porter of Toronto presented a paper on symptomatic and asymptomatic patients at the Association of British Neurologists Annual Meeting in 2011, but only an abstract is available online. The key take-home message:

For now it seems the only published work on asymptomatic carriers is by Waldman 2006, of Collinge’s group at the MRC Prion Unit.  Waldman looks at two symptomatic fCJD patients and two asymptomatic young carriers of CJD-causing mutations.  The main difference Waldman was able to detect in the carriers versus non-fCJD control individuals was an increase in myo-inositol in the frontal white matter.  myo-inositol is a small molecule produced by your body, important in a number of biological processes.  Based on what I could find from a Google search, it seems that people are using myo-inositol as a marker of glial cells.  Rumpel 2003 (paper title: “Is myo-inositol a measure of glial swelling after stroke? A magnetic resonance study.”) refers to myo-inositol as a “glial-specific marker”, and Wick 1995 provides perhaps the most concise-yet-thorough explanation of myo-inositol as glial marker that I could find:

One way of gaining further insight into underlying mechanisms of water ADC changes is to separate intracellular from extracellular contributions by focusing on intracellular metabolites. This can be accomplished by localized proton MRS in vivo, which, for example, allows detection of NAA and myo-inositol exclusively located in neuronal and glial cell populations, respectively.

This– using NAA and myo-inositol as neuronal and glial markers– has to be what Waldman was doing, since Waldman also imaged NAA (which turned out to not be signfiicantly different in the asymptomatic patients vs. controls).

So if myo-inositol is elevated in the frontal white matter even in asymptomatic genetic prion disease carriers, and if myo-inositol is acting as a marker of glial cells, then it’s possible that Waldman’s MRS is imaging exactly the same reactive gliosis as BLI is revealing in Tamguney’s mice.

Which is good and bad.  It may be unsettling to think of changes already occurring in the brain of a perfectly healthy asymptomatic carrier.  But on the other hand, these sorts of markers are exactly what will be needed to determine if therapies are working.  NIH and CHDI have put a lot of money into PREDICT-HD, an effort to determine the earliest markers of Huntington’s Disease, partly in the interests of helping to “shape future HD clinical trials”.  By this I think they mean we need a faster way of knowing if treatments are working than just counting the days until people get sick or measuring how sick they get.  Prion diseases need their own version of PREDICT-HD, and these imaging findings are the beginnings of some earlier biomarkers than we’ve had to date.