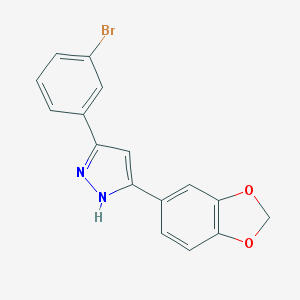 anle138b (above) is the most promising experimental compound right now for treating prion diseases.  It’s not a cure, but has delayed disease considerably in animal models, and that’s why this month we’re running a Microryza crowdfunding campaign to test it in a model of GSS, a genetic prion disease. 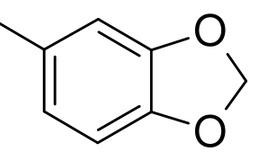 Just a few days after the paper on anle138b [Wagner 2013] was published, a medicinal chemist pointed out to me that some methylenedioxyphenyl compounds have been known to inhibit cytochrome P450 enzymes, an effect which can lead to adverse interactions with other drugs.

So I wondered, how big a concern is this for anle138b?  I had to do a lot of reading to get up to speed: first, what are cytochrome P450s? Second, why is inhibiting them bad? And most importantly, does this methylenedioxyphenyl group definitely spell trouble?

The short answer is no.  Methylenedioxyphenyl groups are found on multiple approved drugs, and whether they cause trouble is specific to each molecule they’re part of. Only experimentation can tell, and so far there’s no sign that anle138b is problematic at the doses used in preclinical studies.

Cytochrome P450s (CYPs for short) are enzymes involved in, among other things, breaking down drugs.  A review of the top 200 most prescribed drugs in the U.S. reported that 75% of them were metabolized (as opposed to excreted directly in urine) and of those, 75% were metabolized by CYPs [Williams 2004 (ft) - Fig 1].

There are 57 different CYP genes in humans, and different drugs are metabolized by different CYPs.  CYPs are pretty fascinating: CYP2C9 has polymorphisms that determine how quickly it can metabolize warfarin and therefore what dose you need.  According to my 23andMe results I’m a slow metabolizer and need a lower dose than most people.

The interaction between CYPs and their drug substrates is often a two-way street.  Many drugs either activate or inhibit particular CYPs [reviewed in Lin & Lu 1998].  CYP inhibition is the basis of some adverse drug-drug interactions [Guengerich 2008]: one drug inhibits the CYP that is required for metabolism of the other drug.  That’s why people on statins always turn down my offers of grapefruit.  Grapefruit juice contains bergamottin, which inhibits CYP3A4, which is required for metabolism of most statins [Bailey & Dresser 2004].  That inhibition leads to increased drug concentrations and a risk of overdose. 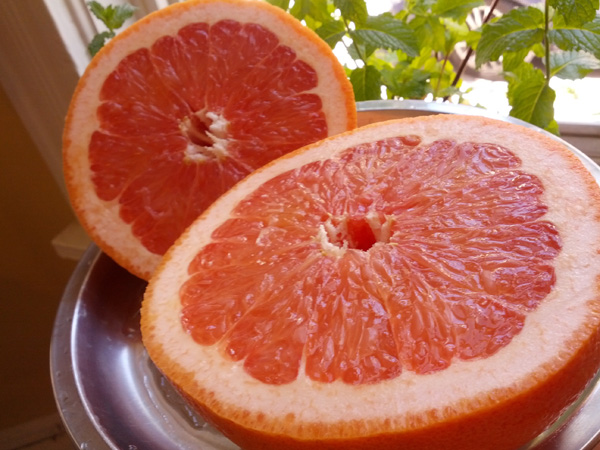 Above: my primary motivation for keeping my cholesterol naturally low is to be able to continue to enjoy delicious grapefruit.

This brings us back to methylenedioxyphenyl.  This chemical group can inhibit cytochrome P450s [reviewed in Murray 2012]. In fact, a few methylenedioxyphenyl compounds, especially piperonyl butoxide, are actually valued for this property in commercial pesticide synergists [Franklin 1976 (ft)].  The term “synergist” here refers to the fact that while piperonyl butoxide doesn’t necessarily have insecticide properties itself, by inhibiting insects’ CYPs it prevents the insects from breaking down the primary insecticide, thus reducing the amount of the primary insecticide that needs to be applied.

Franklin says the compounds are also “relatively innocuous on a chronic basis”, with high doses for long periods of time being necessary to observe chronic toxicity. In fact, the methylenedioxyphenyl compounds he surveys are not acutely toxic at any reasonable concentrations – of the several compounds, none have acute toxicity at less than 500 mg/kg in rodents.  Franklin implied that there is apparently a relatively simple relationship whereby methylenedioxyphenyl molecules with shorter side chains are more toxic, with methylenedioxybenzene (which is nothing but the two core rings themselves) being the worst of all [Franklin 1976 (ft)].  I wondered, is that because longer side chains limit the number or affinity of interactions that the methylenedioxyphenyl group can have, or just because longer side chains add more molecular mass without adding more toxicity?  I couldn’t find a citation answering this question, so I did some back-of-the-envelope using the data from Table 1 of [Franklin 1976 (ft)]: 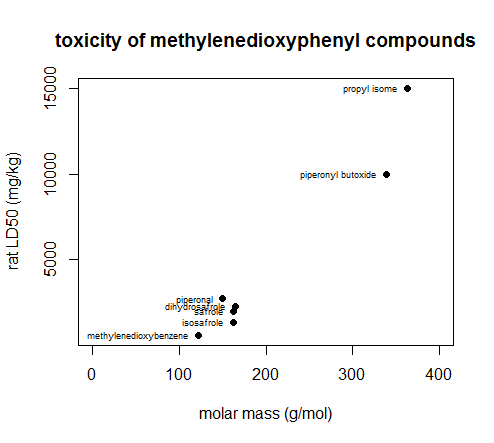 Higher molar mass compounds do seem to require larger doses in order to be toxic, though the variability in LD50 among the four similarly-sized molecules around 160 g/mol says that size isn’t everything.

But LD50 just refers to acute toxicity of a single compound, which isn’t always the source of concern.  Instead, just as for other cytochrome P450 inhibitors such as bergamottin, the danger in some methylenedioxyphenyl compounds lies in potential interactions with other compounds – for instance, some of them make barbiturates longer-lasting [Franklin 1976 (ft)].

But that doesn’t mean that methylenedioxyphenyl compounds are all to be avoided.  In fact, odds are good that you’ve already consumed some today.  That’s because another property of methylenedioxyphenyl compounds is that many of them are aromatic and delicious, and they’re not uncommon in spices: piperine in black pepper, myristicin in nutmeg, and sesamin in sesame all feature this group [Murray 2000 (ft)]. 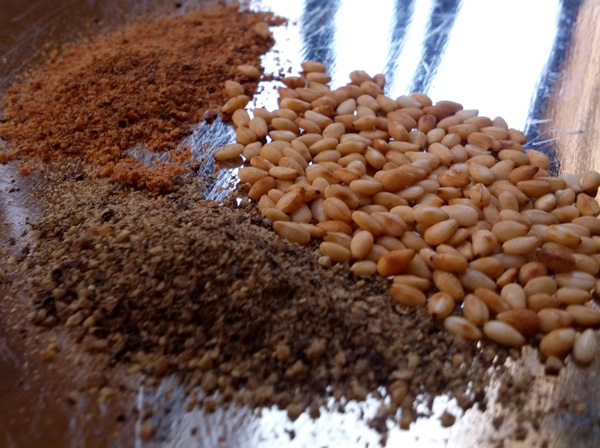 When I was searching for papers about methylenedioxyphenyl, Google autocomplete also led me to another fortuitous discovery: this group also features on methylenedioxymethamphetamine (MDMA), better known as ecstasy.  (For the record, anle138b bears no other chemical similarity to ecstasy).  Methylenedioxyphenyl also appears in at least three legal drugs: piribedil (for Parkinsonism), tadalafil (for erectile dysfunction) and paroxetine (an antidepressant).  For many years, paroxetine, better known as Paxil, was among the most prescribed drugs in the U.S., with about 3 million prescriptions in 2006.  Tadalafil is better known as Cialis or, in France, “le Weekend” due to its longer half-life than Viagra.

Clearly, methylenedioxyphenyl compounds are a diverse bunch.  From what I’ve read, I understand they are not global inhibitors of all CYPs – different methylenedioxyphenyl compounds complex with different CYPs, leading to differing potential for toxicity or drug-drug interactions.  As one relatively recent example, goldenseal extract was found to inhibit none other than CYP2C9 and CYP3A4 – the same two cytochrome P450s mentioned above with regards to warfarin and statins respectively [Chatterjee & Franklin 2003 (ft)].

That’s why when I told another medicinal chemist who works down the hall from me that anle138b had a methylenedioxyphenyl group, her reply was that there’s no way to predict how a molecule will behave based on just one chemical group.  Only experimentation will show what CYPs a given molecule interacts with and whether it causes any adverse interactions.

As mentioned above, piperonyl butoxide is useful as a pesticide synergist even though it doesn’t kill insects on its own.  Interestingly, piperonyl butoxide is used as a synergist specifically with rotenone, an insecticide which turns out to reproduce many features of Parkinson’s disease in rodents [Draper 2002, Sherer 2003 (ft)].  anle138b was actually tested therapeutically in a rotenone model of Parkinson’s in mice, and was found to reduce alpha synuclein aggregation and improve Parkinsonian behavioral phenotypes with, again, no reported toxicity [Wagner 2013].

Of course, anle138b is in its beginning stages of testing and there is still the possibility that we will discover adverse reactions.  Thankfully, it’s one of a class of compounds – diphenylpyrazoles – most of which seem to have anti-prion activity, and so if the methylenedioxyphenyl group does prove problematic, the drug development effort may be able to fall back on one of those other compounds.

But there are good reasons why anle138b is the drug candidate at this point.  It’s the culmination of almost a decade of high-throughput screening and lead development – starting from n-benzylidne-benzohydrazide [Bertsch 2005] and then the diphenylpyrazoles [Leidel 2011], Armin Giese and colleagues synthesized 150 variants looking for the compound with the greatest inhibitory effect [Wagner 2013].  Both anle138b and the runner-up, sery335b, had the methylenedioxyphenyl group on that particular corner of the molecule [Wagner 2013 - Supp 1].  It stands to reason that this group must somehow be contributing to anle138b’s anti-prion effects.

In light of these data, it is hard to imagine wanting to fall back on a less effective drug even if anle138b did prove to have adverse interactions or long-term toxicity.  Prion diseases are completely untreatable at present and the average time from first symptom to death is on the order of several months [Pocchiari 2004 (ft)].  Efficacy has to come first – if treated patients live long enough to see problems with chronic effects of a drug, then they’re already luckier than any patients who came before them.

But this is all getting ahead of ourselves.  At present, there is no evidence for any toxicity or adverse effects at all of anle138b at the doses used therapeutically.  Although methylenedioxyphenyl groups can act as cytochrome P450 inhibitors, every molecule has to be evaluated individually.  The existence of multiple approved drugs that contain methylenedioxyphenyl groups demonstrates that this chemical group by no means precludes a drug from being safe and useful.