I couldn’t be more impressed with RT-QuIC. Prior to coming to Hamilton, Montana last month, I had never even worked in a wet lab before – I have spent the past two years in a strictly dry lab role, doing computational genomics. Since most things in science fail, I fully expected that my first ten or twenty attempts to detect prion seeding activity in samples using RT-QuIC would end in frustration. Incredibly, my first RT-QuIC experiment actually worked, and in our few weeks here Sonia and I have now run six RT-QuIC plates, all of which have been successful.

I’ll document here what we did in our first experiment, now a couple of weeks old. Our goal was simply to check whether we could indeed get the assay to work: would positive samples come up positive, and negatives come up negative? Toward that end, Sonia and I each filled 1/4 of a 96-well plate with six test samples in quadruplicate: hamster normal brain homogenate (NBH) at a 5 × 10-5 (hereafter “5e-5″) dilution, and hamster 263K brain homogenate at 5e-5, 5e-6, 5e-7, 5e-8, and 5e-9 dilutions.

First we created a “master mix” with all of the ingredients for RT-QuIC except for the samples to be tested. There are many different formulas for RT-QuIC, and as mentioned here the currently favored formula in the Caughey lab is to have the final concentrations in the reaction volume be 1X PBS, 1 mM EDTA, 10 μM ThT, 170 mM NaCl + the 130 mM NaCl in the PBS = 300 mM NaCl total, and 0.1 mg/mL recombinant PrP. I’ve written an R function to create master mix formulas here. As a substrate, we used recombinant N-terminally truncated Syrian hamster PrP, or rSHaPrP90-231.

The results were outstanding: all NBH wells stayed negative up through the time we pulled the plate at >80h, all 263K wells at 5e-5 through 5e-8 dilutions turned positive, and we hit endpoint at 5e-9, with 2 of 4 wells turning positive in my experiment and 1 of 4 in Sonia’s. Here are the plots – the assay was run in quadruplicate, so each curve is the mean of four wells: 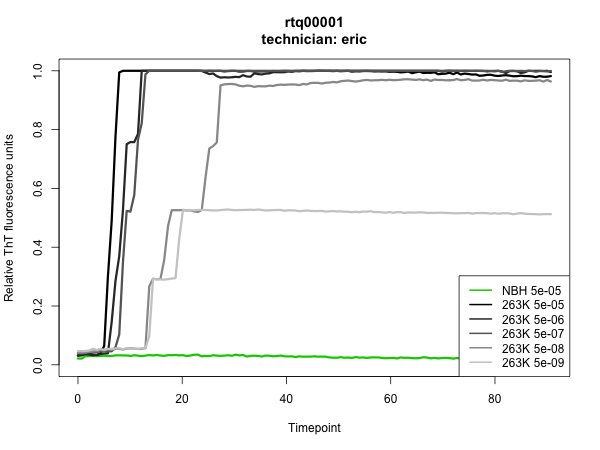 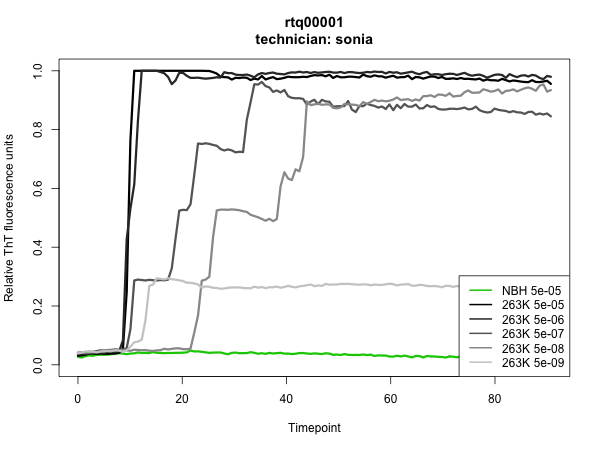 To have such a clean result on the first thing I ever did in the wet lab is quite a testament to RT-QuIC’s simplicity and reproducibility. To me, it was also a powerful demonstration of the sterility of biosafety cabinets. RT-QuIC is so sensitive that it can reliably detect 2 μL of a 1e-8 dilution of 263K prion-infected hamster brain homogenate and yet, for all the pipetting and vortexing of infected brain homogenate that goes on under the hood, there was apparently not so much as a trace of infected material that found its way into an uninoculated well.

Of course, it wasn’t easy getting here – years of work have gone into fine-tuning the RT-QuIC protocol to make it as reliable as it is now. One of the most critical steps is making the recombinant PrP in the right way. We made our own batch of recombinant PrP during this visit to Hamilton as well and we plan to share a walk-through of that process soon.

Before there was RT-QuIC [Atarashi 2011], which uses ThT fluorescence as a readout, there was regular old QuIC, which uses a Western blot as a readout [Atarashi 2008]. This is occasionally still useful as a validation, so to learn the technique, Sonia and I also performed a Western blot on the products of a few of our RT-QuIC wells. We each chose two ThT-positive wells (one from the lowest and highest dilutions of brain homogenate) and two ThT-negative wells (one from an NBH well and one from a 5e-9 well that never turned positive). We performed a very light PK digestion – 1h at 37°C with 2.6 μg/mL of proteinase K. The original QuIC protocol called for 6.7 μg/mL [Atarashi 2008 supplement], and a standard digestion on brain homogenate is more like 50 μg/mL [e.g. Watts 2014a].

Under a more thorough PK digestion, amyloid-negative wells would lack any protein and amyloid-positive wells would contain a PK digestion product. That’s not the case here, but we were relieved to find we could still distinguish the amyloid-positive and negative wells. The N-terminally truncated substrate, rSHaPrP90-231, weighs in at 16 kDa, while its PK digestion product is ~10kDa. In the blot below, you can see that the ThT-negative wells contain only the 16 kDa product, while the positive wells contain both a 10 kDa and a 16 kDa band. The blot suffered from some other technical problems as well: the gel came slightly loose from its casing and allowed some of the protein and dye to bleed together between lanes and run faster – this accounts for the black smear across the bottom of lanes 6 and 7. We developed the blot with the R20 rabbit polyclonal antibody against residues 218-232 of SHaPrP [Caughey 1991] and a goat anti-rabbit secondary antibody conjugated to alkaline phosphatase followed by exposure to AttoPhos. 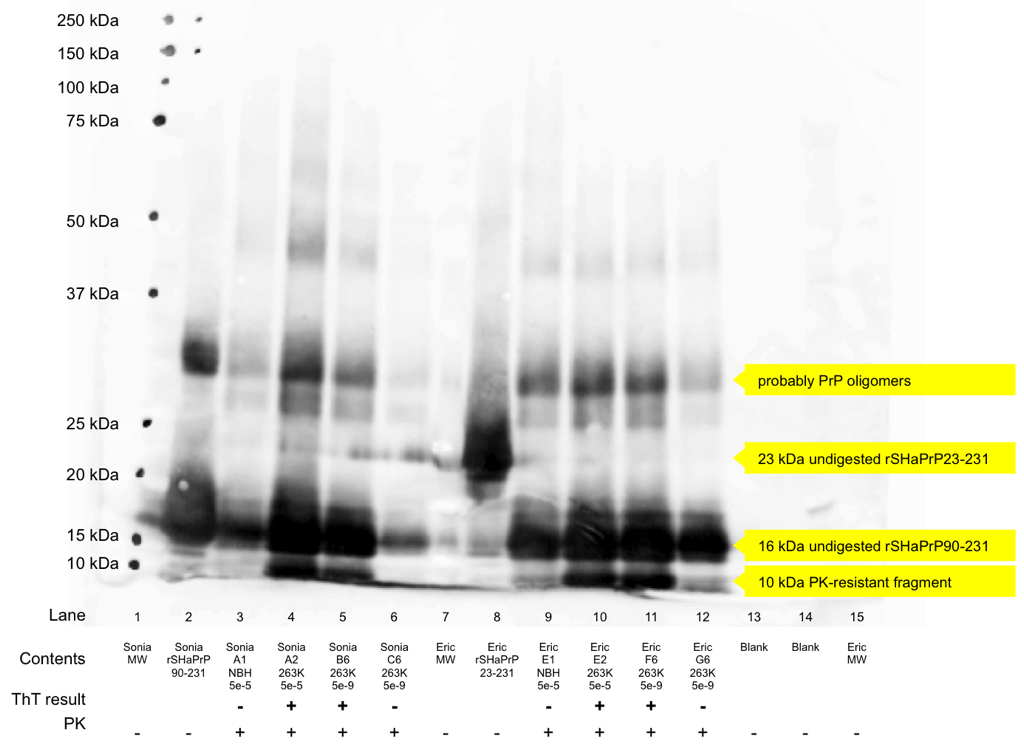 The process of making a Western blot was, well, certainly not as easy, elegant nor as successful as RT-QuIC, but it seems to have worked.

Now that we’ve learned the basics of RT-QuIC and seen what a powerful tool it can be, we are excited to apply it to answering important questions in the search for therapeutics for prion disease. We’d like to give a special thanks to Christina Orrù, Matteo Manca, Daniela Perra, Brad Groveman, Andy Hughson and Allison Kraus for teaching us all of the above techniques, and above all to Byron Caughey for welcoming us into his lab as trainees. The Caughey lab is an amazing place and we hope to make another visit soon.