These are my notes for week 03 of Harvard’s BBS 230 “Analysis of the biological literature” course (September 16-18, 2014). This includes my own reading and analysis of the papers, as well as my notes from both discussion sections.

The papers for this week are [Sun 2013] and [Wu 2013], published by the same group — Chen Zhijian (陈志坚)’s group at UT Southwestern Medical Center — in the same issue of Science. Together, the two papers established this pathway: 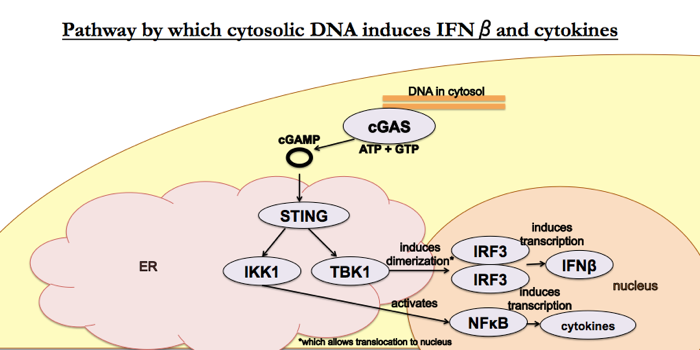 Second messengers are a means by which signals can be amplified in cellular signaling pathways. By 2013, already known second messengers included cAMP, IP3, DAG, and Ca2+ - see Cell Biology 09.

Innate immunity is responsible for immediate response to a small set of molecules that are associated with pathogens. It is an ancient system common to most (all?) animals. Activation of the innate immune pathways results in secretion of cytokines which will attract adaptive immune cells to the site and which will also induce macrophages to phagocytose invading bacteria. The 2011 Nobel Prize in Physiology or Medicine was awarded in part to Bruce Beutler and Jules Hoffmann for clarifying the role of toll-like receptors in innate immune response to lipopolysaccharide.

The authors’ assays rely on permeabilizing cells. To permeabilize cells, one might often use a low concentration of a detergent such as Triton. These authors instead use perfringolysin O (PFO) instead, probably because it is a very mild treatment. Whereas detergents will change many things in the cell (protein folding, etc.), PFO is a Clostridium protein exotoxin which specifically forms pores in the cell membrane.

The readout for pathway activation (eventually called the “cGAMP activity assay”) relies on dimerization of a transcription factor called IRF3 (interferon regulatory factor 3). You can’t detect dimerization of proteins in a standard Western blot protocol, because boiling samples in SDS will dissociate the dimers. Instead, they use 35S-labeled IRF3, which they add to the permeabilized cells along with the activated lysates from other cells, and then they run the IRF3 on a native gel. This protocol avoids boiling in SDS, and the use of exogenously added radiolabeled IRF3 ensures that any IRF3 dimers that are detected were formed after addition of the activated lysate (whereas if they’d done a Western blot they would have had to deal with background due to a baseline level of endogenous IRF3 dimerization).

This paper was unbelievably thorough. It established cGAMP as a second messenger in animals — until then, cyclic dinucleotides had only been known to be second messengers in Dictyostelium.

If cGAMP is called a second messenger, then the cytosolic DNA must be considered the “first messenger”.

Sun 2013: Cyclic GMP-AMP synthase is a cytosolic DNA sensor that activates the type I interferon pathway

This paper asks how cytosolic DNA induces cGAMP production. The answer: a cyclic GMP-AMP synthase (cGAS) encoded (in humans) by the MB21D1 gene.

Soon after these papers were published, this group came out with a third Science paper in which they showed that reverse transcription of HIV RNA into DNA triggers this pathway [Gao 2013] and a fourth Science paper in which they created cGAS knockout mice and showed that they were more likely to die when infected with herpes simplex virus [Li 2013].