These are my notes from lecture 29 of Harvard’s Chemistry 20: Organic Chemistry course, delivered by Dr. Ryan Spoering on April 20, 2015.

A classic example is as follows:

In the aryl halide at left, the carbons should be named relative to the chloride: 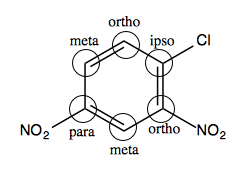 The chloride itself is the “ipso” position, so swapping out -Cl for -OCH3 is an ipso substitution.

If you think through the mechanism of this, at first it doesn’t make sense:

But some insight can be gained by noticing that the reaction will not happen without the NO2 electron-withdrawing groups: 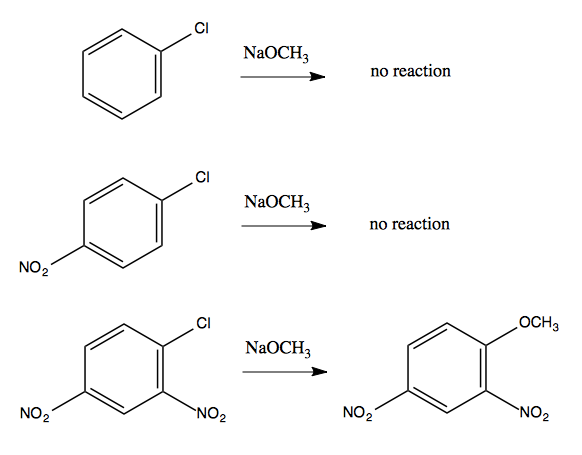 It turns out that CH3O- does indeed attack at the ipso carbon, but in the intermediate, the CH3O and the Cl are both bound at once:

The resonance structures in the intermediate provide enough stabilization to make this possible. In general, having two ortho-, para-directing, electron-withdrawing groups in the reactant is sufficient to allow this sort of reaction to occur.

The only solution is to first start with a halogen in the desired ipso position, as it is an ortho-, para-director and will allow you to add the NO2 electron-withdrawing groups, after which you can swap out the Cl for the CN:

Note that the larger halogens Br and I don’t participate as well in this chemistry. F is actually better than Cl as a leaving group for this sort of substitution, however we do not know how to make fluorinated benzene, so here our only option was to use a chlorinated one.

At first it seems to violate the rule we have just learned, that you need electron-withdrawing groups to enable nucleophilic aromatic substitution. But we can gain some insight by noticing that if we do this with an extra methyl group, we get an almost 50/50 mix of meta and ortho products:

Considerable evidence indicates that this reaction involves NH2- attacking and stealing a hydrogen, almost like an E1 reaction, creating a weird and reactive intermediate called benzyne. This is then attacked a second time by an NH2- that binds, resulting in a carbanion as the second intermediate. Finally, this gets protonated using a proton from an NH3, yielding the product:

Here are some more crazy reactions involving benzyne as an intermediate:

This last reaction has the following mechanism:

Using the aromatic chemistry we’ve learned in this class, you should be able to solve the following problems. 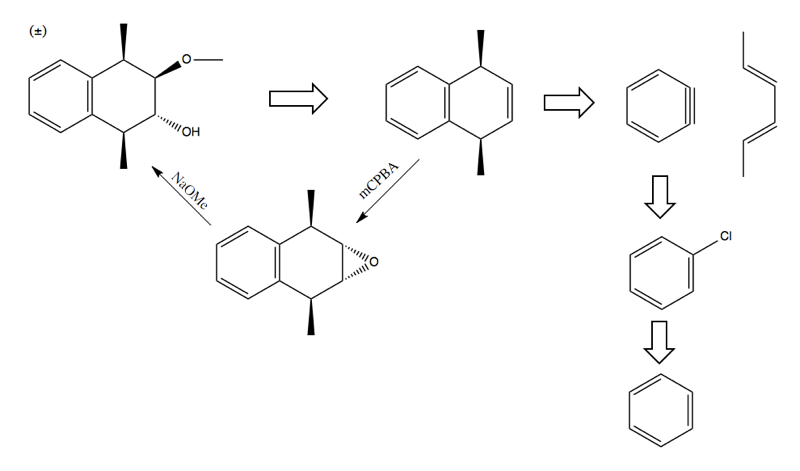