The first half of today’s lecture is intended as a view onto the very big picture of the human disease context in which most protein-folding research is conducted. The second half is a brief talk about the beta helix model of amyloid.

A brief history of human disease

Historically much human mortality and morbidity has been due to malnutrition. Some diseases of malnutrition were solved through social, rather than scientific, advances. Here are a few discussed in lecture:

Infectious disease has also been a major cause of mortality and morbidity for millenia. Again, some of these diseases have been eradicated or nearly eradicated without a drug or vaccine ever being developed. 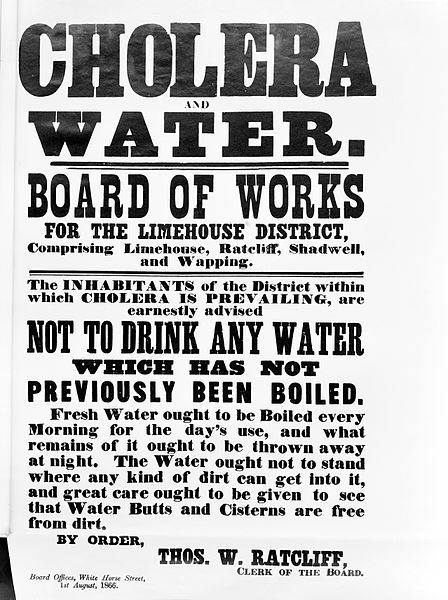 Above: a public health message about cholera from East London, 1866 - image via Wellcome Trust.

Wound infections during WWII led the U.S. federal government to finance a program, contracted to Merck, to mass produce penicillin.

Over the last couple of centuries there have been a variety of diseases due to occupational hazards in particular industries:

*“Mad hatters” who used mercury to make felt are the most famous example. In New England, where there was a large hat industry, the trembling phenotype of mercury poisoning was known as “The Danbury Shakes” after Danbury, CT. In southern Japan, methylmercury poisoning from industrial runoff caused a disease called Minamata syndrome.

Aflatoxin, produced by fungi (Aspergillus genus) that grow on improperly stored peanuts, can cause liver cancer. Streptozotocin, isolated from the bacterium Streptomyces achromogenes, was originally investigated as an antibiotic, whereupon it was noticed to have severe toxicity to pancreatic Islet cells, which led to it being used as a drug for pancreatic cancer and also to it being marketed to scientists as a way to create lesion models of type 1 diabetes.

The beta helix model of amyloid

The parallel beta-helix was first introduced in week 3. Some pathogens have parallel beta helices which they use to recognize sugars on the outside of host cells. One of the most famous examples with a known structure is that of the Salmonella phage P22 tailspike, whose function is to recognize and bind lipopolysaccharide. It is a homotrimer [Steinbacher 1994, PDB# 1TSP]: 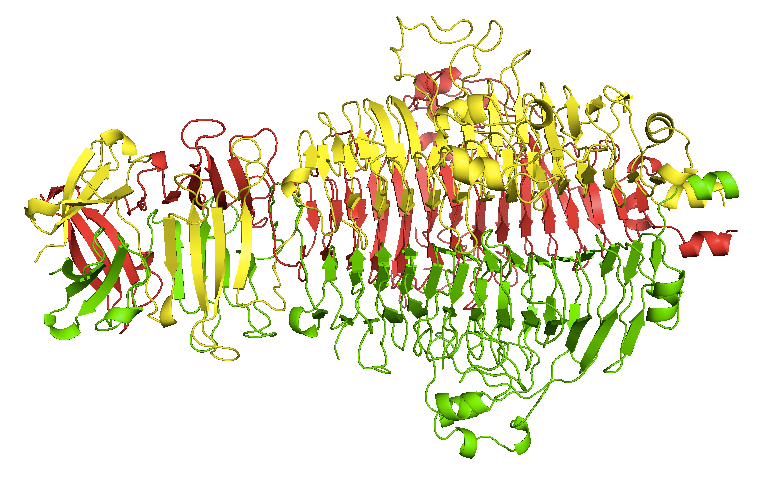 This protein was the first protein for which it was demonstrated that inclusion bodies in bacterially expressed recombinant protein were composed of a partially folded intermediate [Haase-Pettingell & King 1988, Speed 1995, Speed 1996]. It is incredibly stable in its native state, though - in fact, it cannot be denatured by SDS alone without boiling. The parallel beta helix domain in the center is stabilized by stacking interactions among phenylalanine side chains, a structural feature which was not recognized until years after the structure was solved [Simkovsky & King 2006]. It was eventually realized that the folding is processive: the hydrophobic stacks inside the beta helices have to nucleate, after which it is easier for them to undergo tempated elongation, which terminates upon capping [Simkovsky & King 2006]. Until folding is complete, the hydrophobic residues that are not yet part of the beta helix are exposed, which accounts for the incredible propensity of partially folded intermediates to aggregate.

Parallel β-helices have been considered as one possible model for the structure of amyloid. If true, then the processive model of P22 tailspike folding might also explain the nucleation and templated elongation of Aβ fibrils. This would be expected to require multiple steps: first, the nascent amyloid must recognize/bind an Aβ monomer, and then that new monomer must re-organize itself to be part of the fibril such that it is now the growing tip capable to recognizing the next monomer. Although there exists much evidence in favor of a beta-helix model for amyloids, the data we have are not sufficiently three-dimensional to allow us to ask how many beta-sheets deep the fibril is - is it a dimer, a trimer, or some higher order combination of sheets? Some proposed models contain four sheets [Makin & Serpell 2005] while others have three sheets more like the P22 tailspike above.