Or, “Some papers that shape my thinking on prion therapeutics”.

Lately I’ve gotten a request from several people, ranging from scientists starting to get interested in prions, to people at risk for prion disease starting to get interested in science. People have asked me to put together a suggested reading list to introduce them to the field. I resisted this request for a long time, for a few reasons. First, I like to read and cite exhaustively, not just to pick a few favorites. Second, recommending papers is hard — how much should you prioritize reading the earliest discovery of something versus more recent work that contains more of a full picture? Third and perhaps most importantly, there is no surer way to make enemies than to fail to cite someone’s paper in a list of important milestones in the field!

But eventually enough people asked me that I relented and decided to write this post. But I want to frame it slightly differently. What follows is not intended as a list of the most important papers, but rather, as an annotated guide to how I think about prion therapeutics, with suggested reading along the way. Please don’t be offended if your paper isn’t here — this post absolutely does no justice to the large swathes of the prion field that I personally just don’t spend as much time thinking about, such as neuropathology, prion detection, structural biology, veterinary prions and zoonotic risk, and so on.

Every piece of formal writing that I produce these days (fellowship applications, my preliminary qualifying exam, etc.) contains, usually as the first sentence, a statement something like this:

Prion disease is a neurodegenerative disorder caused by misfolding of the cellular prion protein, PrPC, into an autocatalytically self-propagating conformer called the scrapie prion protein, or PrPSc.

That’s the disease mechanism for you, in one sentence. What’s incredible is just how many bothans died to bring us this information. That one sentence contains whole careers, decades of work condensed into a singular conclusion.

If you only care to read one paper about this sentence, read Stanley Prusiner’s Nobel Lecture [Prusiner 1998]. If you do want to read the whole backstory, here are some key points along the road to that one sentence, with the corresponding papers:

Here’s a quick aside about nomenclature. Along the way as you read these papers, you’ll notice there are a ton of different names for prion disease. In humans, some of these names refer to different clinical presentations, others to specific strains or genetic mutations or etiologies. Most of these names originated by accident of history, and while they are not totally meaningless, they in no way represent any sort of logical or systematic organization of prion disease subtypes that one would generate from first principles knowing everything we know today. And then in non-human mammals, people just call all prion disease in that animal one thing, even though other animals, like humans, have multiple strains and multiple etiologies of prion disease. The naming system is a mess, which is why I almost exclusively use the term “prion disease”.

Table 1. Other names for prion disease

Now, moving beyond that one first sentence, the next key fact to know is the existence of prion strains. My applications and such often have a second sentence somewhere in there that goes like this:

Prions exist in phenotypically diverse strains, which are encoded in distinct conformations of PrPSc. 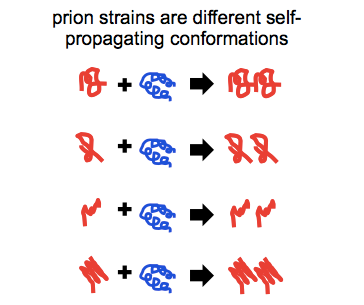 Prion strains have been defined operationally by a range of features: differences in incubation times, transmission properties to different species, neuropathological profiles and attendant symptomatic presentations, protease sensitivities and cleavage sites, and sensitivity to inhibition by small molecules. But at the root of all of these phenotypic differences, we believe that what prion strains are is different conformations of PrPSc.

How do we know? We still don’t know the structure, at atomic resolution, of any prion strain. But there is ample indirect evidence that strains differ in conformation. Here are three of the most classic demonstrations of it:

And all of that means that PrP is the obvious drug target if you want to treat prion disease. So I often also include a sentence or two along these lines:

From first principles, PrP is the obvious drug target for treating prion disease. PrP is the major or sole component of prions, and its expression is required for disease and for neurotoxicity.

Here are a few of the foundational papers that provide proof of principle that if you can target PrP, then you can treat prion disease:

One key take-home message from the above work is that the less PrP, the better, and the more PrP, the worse. Here’s a plot of the data from [Fischer 1996] to drive that home: 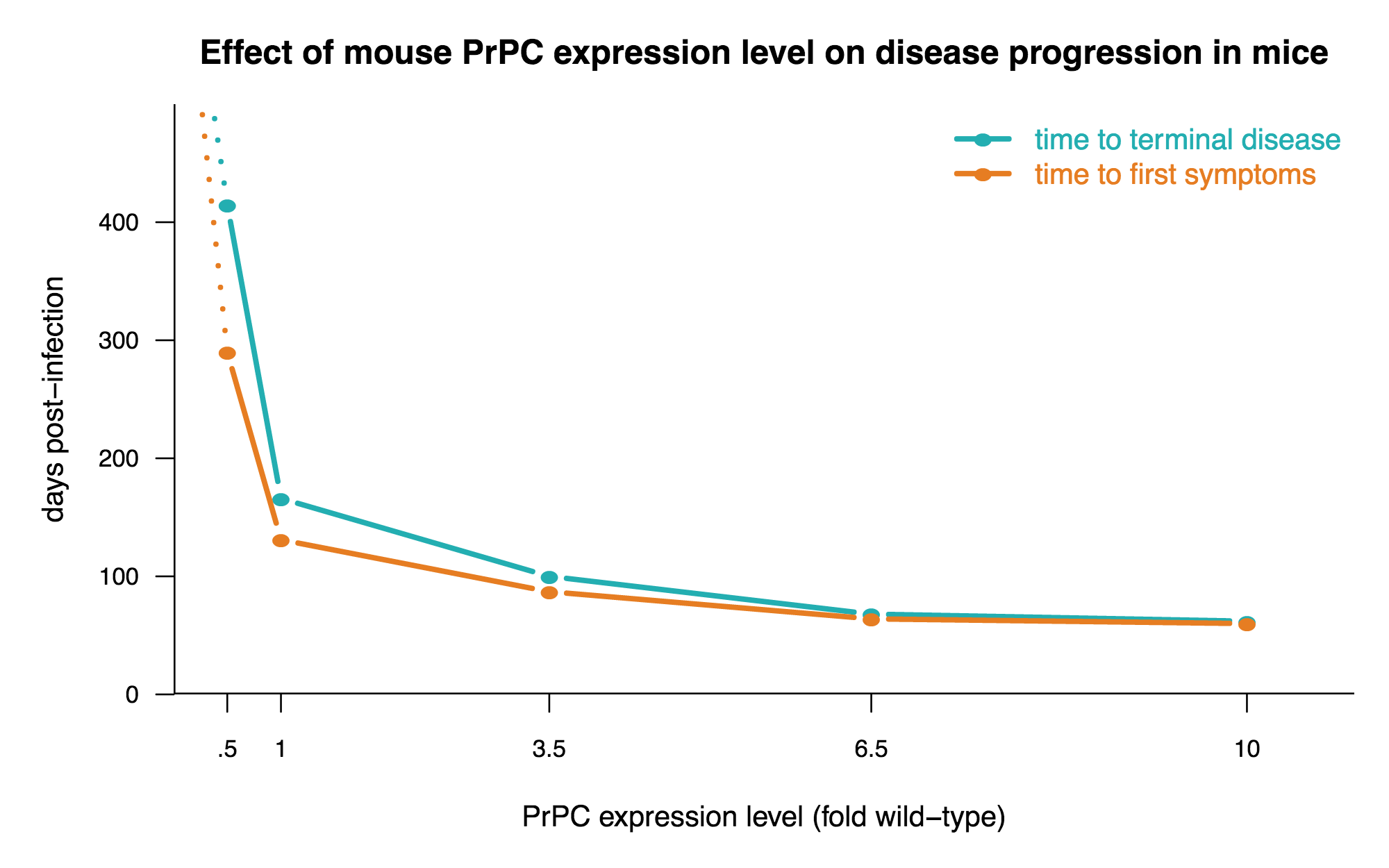 In presentations I sometimes also show this handy diagram of a few key lessons from prion mouse models: 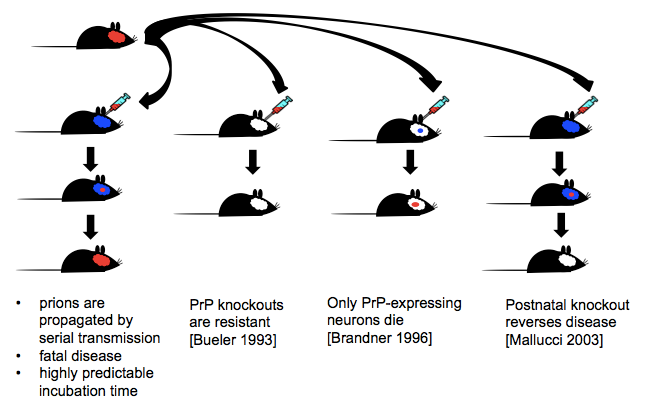 As soon as I get to talking about reducing PrP expression as a therapeutic strategy, the question arises, well, what is the knockout phenotype? Here are a few key papers on that:

My ultimate reason for interest in knockout phenotypes, of course, is to know whether reducing PrP levels would be safe. I think the clear answer is yes. The myelin defect reported here begins early in life and appears histopathologically severe, but in terms of consequences, it’s still pretty mild: at 60 weeks of age, the difference in hot plate response among the mice is tiny, to the point of not even being detectable in some mouse strains. And the defects are not seen at all in heterozygous knockout mice. So in the face of how terrible prion disease is, nothing here reduces my enthusiasm for reducing PrP expression as a therapeutic strategy. (We now have some, albeit very limited, evidence that heterozygous knockout is tolerated in humans too [Minikel 2016]).

While the proof of concept for therapeutic targeting of PrP is very strong, the small molecules that have proven most effective at delaying prion disease in mice don’t reduce PrP levels, and most, in fact, don’t seem to interact directly with PrP at all. They were discovered in phenotypic screens, and their mechanisms of action are still unknown. When I describe the current state of the field I usually say something like this:

Phenotypic screening in prion-infected mouse cells has yielded small molecules that reduce prion replication in cell culture and extend life in prion-infected mice by 2-4X. This success demonstrates, in principle, the feasibilty of small molecule therapy for prion disease. None of these molecules, however, has shown efficacy in humanized mice infected with human prions.

That’s the current state of the field. To learn more about that current state and how we got here, I offer you just a tiny fraction of the many excellent papers out there about prion therapeutics:

To summarize all of the above considerations, I often include a table something like the following. It includes a few more references not mentioned above, but you don’t necessarily need to read all of them to get the gist — they mostly just validate and shore up conclusions mentioned above.

In thinking about therapeutics, it will also help you to know some basics about PrP. Let me help with one that non-prion people constantly forget: PrP is a GPI-anchored protein that can be found transiting through the secretory pathway, living on the outside surface of the cell, or in the endosomal/lysosomal pathway. Here is a handy diagram to help you remember some things about PrP’s localization and life cycle:

Above I’ve only depicted PrPC and have not depicted where in the cell PrPSc replication occurs. That’s in part because there isn’t total agreement or clarify on this point, though as I reviewed in this MoA post it seems like PrPSc replication probably occurs somewhere in the endosomal/lysosomal pathway at right.

Here are just a few classics on prion cell biology:

And you might also want to know a bit about two oft-mentioned tools of the prion trade:

Again, there’s a whole world of other amazing scientific literature out there on prions that I haven’t even touched on here. If you had to pick a rare disease to have, prion disease really is amazingly well-studied and a lot is known. But for an “introductory” reading list like what I was asked for, this post is already way too long.