In our study last year, by comparing case and population control allele frequencies, we managed to come to conclusions about the penetrance of only 14 out of the now 67 reportedly pathogenic PRNP variants [Minikel 2016]. The remainder were too rare, both in prion disease cases and population controls, for allele frequency comparisons to reach any meaningful conclusion. But it would be very useful to have at least an educated guess about the penetrance of the other 53 variants. Some are probably high penetrance (say, >50% lifetime risk), others might confer a risk that is increased above the population baseline but still low, and some might be completely benign. Where to begin?

To start to get at this problem, I recently took a deeper dive on the literature about these 67 reportedly pathogenic variants, looking at the human genetic evidence for each variant’s pathogenicity. Here are the criteria I looked at:

In total, then, 27 out of the 72 have evidence for either Mendelian segregation or de novo status according to these criteria. These are all likely to be high penetrance variants. For some of these we can say definitively that penetrance is high, when the family is large or when there is dramatic case/control enrichment. For the rest it’s likely, although it’s conceivable for some variants that the penetrance is somewhat more modest and maybe there just happened to be a family with three affecteds by coincidence.

There are also probably some variants that are genuinely high penetrance but have no boxes checked above. For instance, sometimes a family history just isn’t available for a patient, or there is a history of disease but the family never speaks about it and so the younger generation doesn’t know, or the family history appears negative only due to adoption or a non-paternity event, or the variant is de novo but the parents are already deceased and there are no siblings, so it is impossible to prove that it’s de novo. When there’s only one patient and the variant is also ultra-rare in controls, it’s hard to say anything completely definitive.

Overall, then, I am not asserting that any of the criteria above are proof positive for a particular risk classification, but I think they each make a classification more or less likely, and are worth noting. Many papers on genetic prion disease include a figure with a diagram of PRNP’s coding sequence, sometimes with elements of protein secondary structure noted, and all the reportedly pathogenic mutations indicated. I set out to make a new such figure with variants shaded by their level of human genetic evidence (evidence for high penetrance, evidence for increased risk, or no evidence) and sized by the number of cases in our recent case series [Minikel 2016]. Here’s what I came up with: 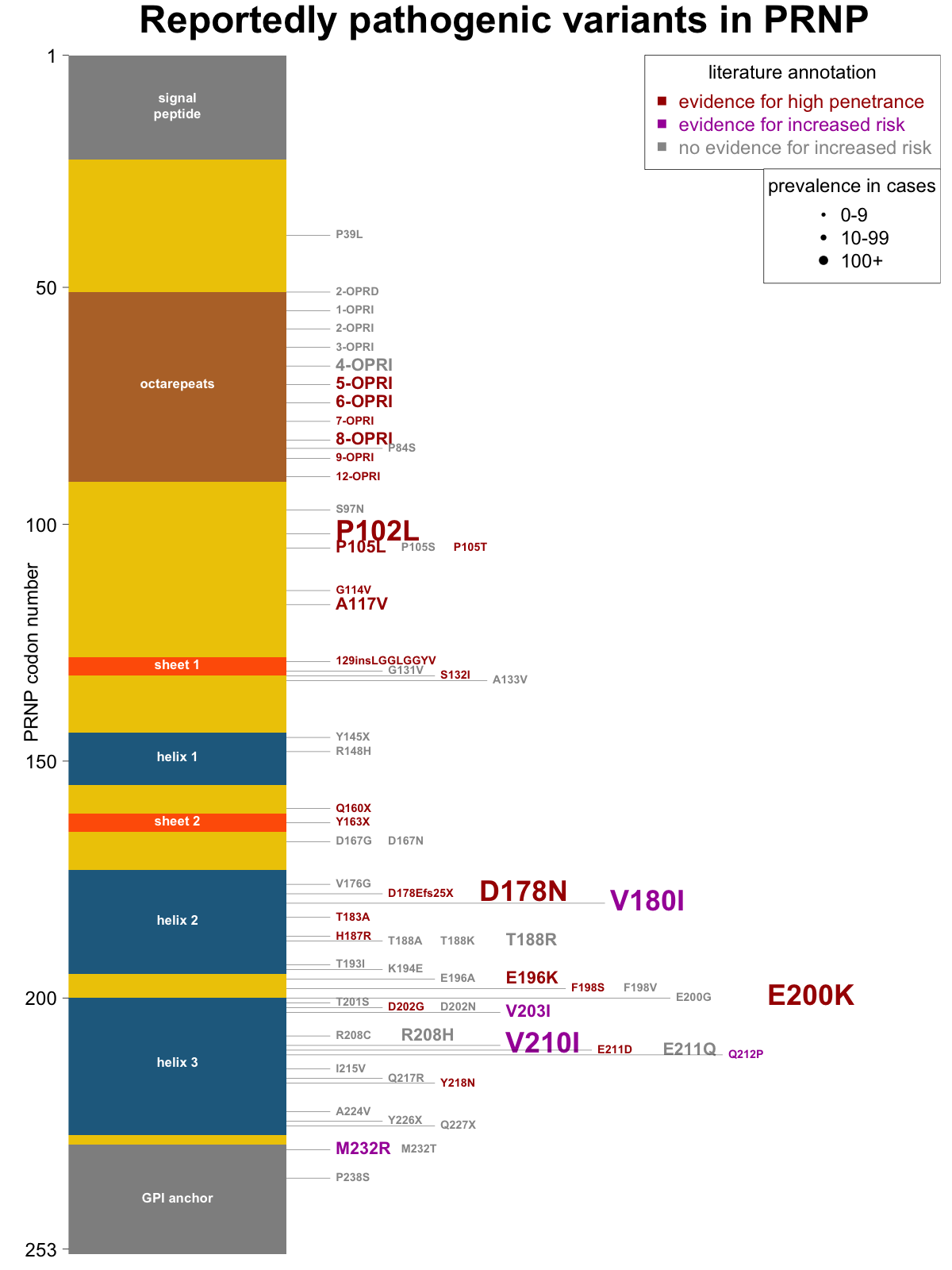 code to produce this plot

As a future direction, there are additional sources of information that should be useful in classification that I haven’t gotten into here but may go through and annotate in the future: