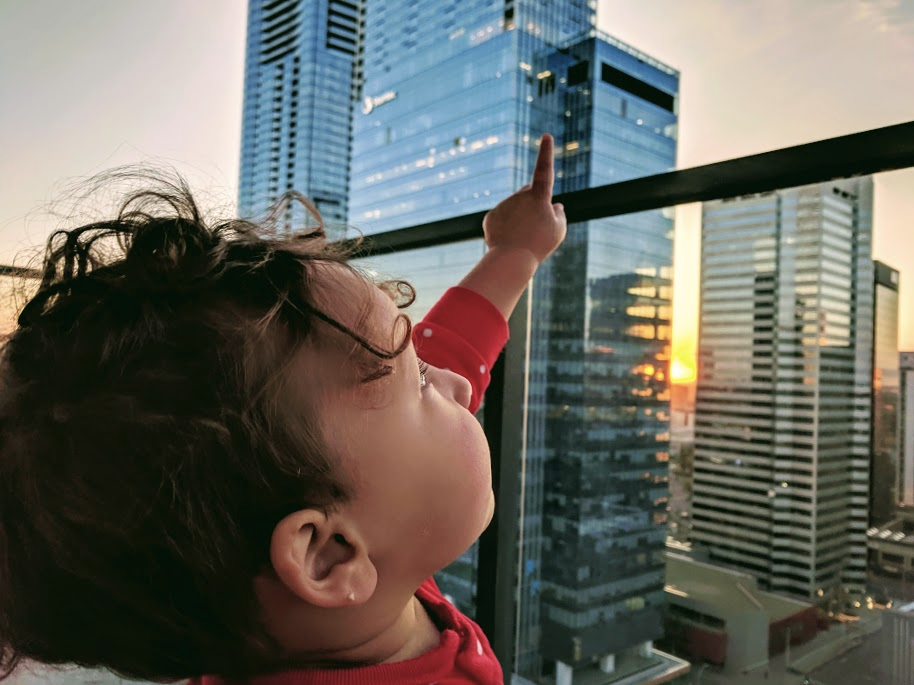 We are in Edmonton, Alberta for the Prion2019 conference attending the afternoon Biomarker Workshop hosted by Kurt Giles & Sonia Vallabh. I’ll be covering the talks using a technique called real-time blogging live on the ground (RT-BLoG). 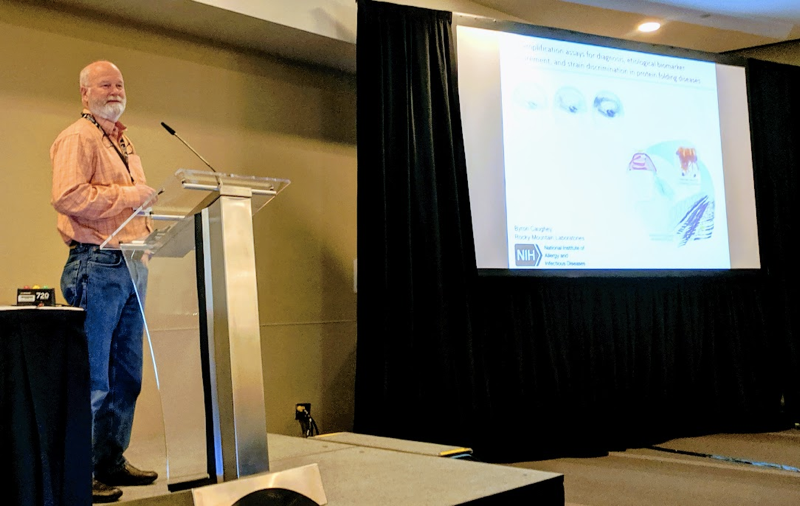 The human brain expresses six tau (MAPT) isoforms which include both three-repeat (3R) and four-repeat (4R) tau isoforms. Different tauopathies are associated with different proportions of 3R vs. 4R tau. Eri Saijo from the Caughey lab, after a tremendous effort to get tau to “behave”, managed to get a 3R tau RT-QuIC assay working which was highly specific to Pick disease as opposed to other tauopathies [Saijo 2017]. Until now, though, they haven’t had a good RT-QuIC assay for 4R tau-associated diseases, which include progressive supranuclear palsy (PSP), corticobasal degeneration, and argyrophilic grain disease. Michael Metrick from the Caughey lab has recently tested a large battery of conditions across the Hofmeister series to figure out which conditions give good lag phase separation (discrimination between positive and negative controls) for a battery of different protein misfolding diseases. Interestingly, the answer is not the same for all protein misfolding diseases nor is it even the same for all tauopathies. Metrick and Eri Saijo did manage to find conditions that perform well for 4R tau disease brain tissue, with sensitivity across different tauopathies that is nearly opposite to that for the original 3R tau assay that Saijo developed. 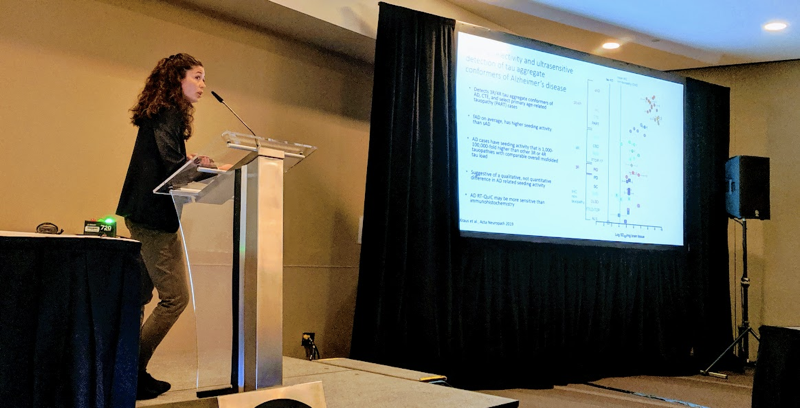 In contrast to some of the tauopathies mentioned in Dr. Caughey’s talk, Alzheimer’s disease and chronic traumatic encephalopathy (CTE) each feature a mix of 3R and 4R tau aggregation in the brain. Dr. Kraus has been working on an optimized assay for detection of tau seeds in these mixed 3R/4R tau diseases, and then using this assay to probe the nature of the tau seeds [Kraus 2019]. The Alzheimer’s tau aggregates were Sarkosyl-insoluble protease-resistant, and tau antibody immunoreactive. For Alzheimer’s, the assay is very sensitive, out to at least a 10-7 dilution of brain homogenate, but for CTE, the seeding activity tended to be on the weaker end.

Christina Orru: Diagnosis and biomarkers of Parkinson’s and dementia with Lewy bodies: rapid and ultra-sensitive quantitation of disease-associated α-synuclein by α-syn RT-QuIC 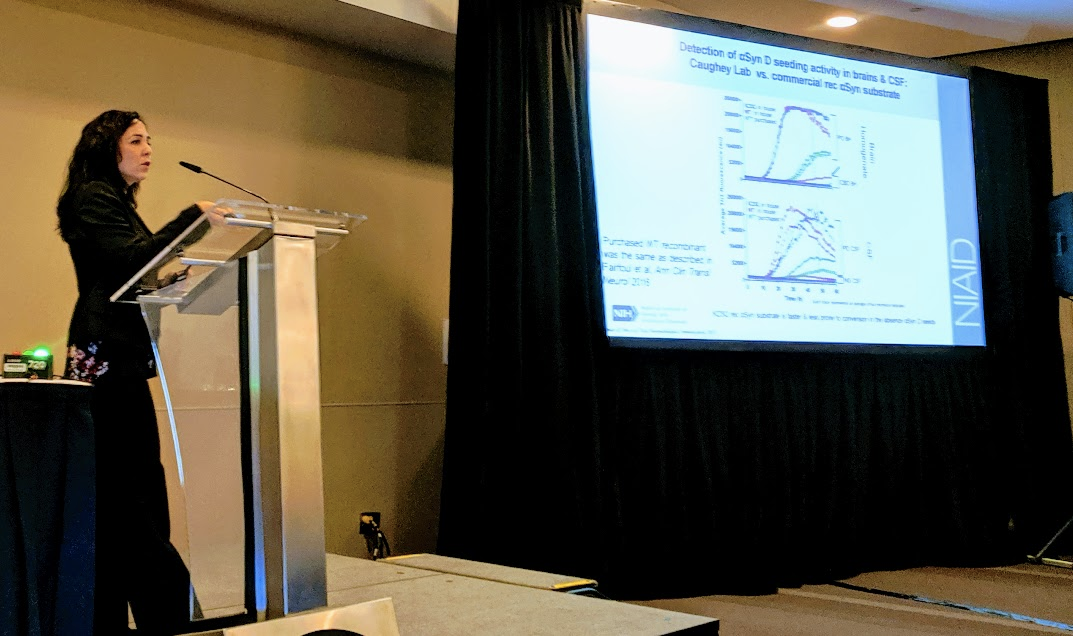 Dr. Orru has been working on developing α-syn RT-QuIC based on recombinant K23Q α-syn detection of seeds in both brain and CSF [Groveman & Orru 2018]. It works for both Parkinson’s disease (PD) and dementia with Lewy bodies (DLB). In a blinded set of 60 CSF samples, they were able to discriminate synucleinopathy from non-synucleinopathy patients with 93% sensitivity and 100% specificity. 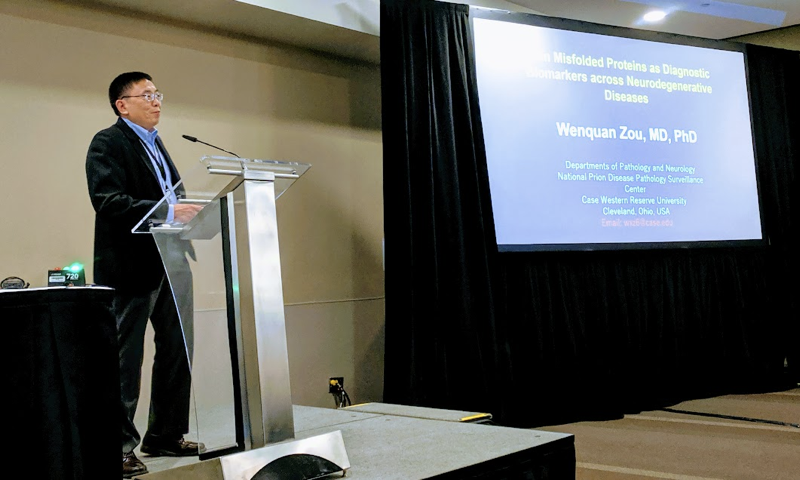 A definitive diagnosis of neurodegenerative disorders requires examination of brain tissue for misfolded proteins. But brain biopsy remains an undesirable antemortem diagnostic option, and in many cultures, even postmortem brain autopsy is almost never pursued. Because blood has proven to be a challenging tissue for detection of pathological protein aggregates, whereas PrPSc has long been observed in the skin of animals peripherally infected with prions (whether naturally or experimentally) [Thomzig & Schulz-Schaeffer 2007], Dr. Zou has pursued skin as a tissue for diagnostic testing.

A couple of years ago, in collaboration with the Caughey and Kong labs, Dr. Zou’s group showed that they could detect prions by RT-QuIC and bioassay in skin of human sporadic CJD patients [Orru 2017] — I’ve previously blogged about some of this work here. More recently the Zou and Kong labs have used RT-QuIC and PMCA to detect prions in skin of intracerebrally infected animals [Wang 2019]. They are now working on applying this same approach to other neurodegenerative diseases, looking for example at α-syn RT-QuIC and α-syn PMCA on Parkinson’s disease versus Alzeimer’s disease skin samples. 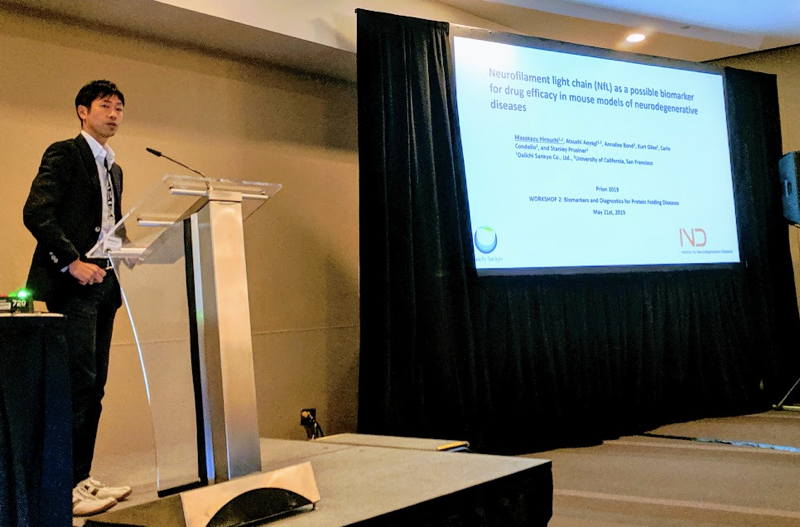 Dr. Hirouchi is a biomarker scientist from Daiichi Sankyo reporting on some work he did while visiting the Prusiner lab at UCSF. He is presenting work using neurofilament light chain (NfL) in plasma as a marker of neurodegenerative disease progression in animal models. I’ve previously introduced NfL on this blog in my fluid biomarker survey; briefly, animal studies have shown that NfL level in both CSF and blood are good markers of neuronal damage [Bacioglu 2016].

Dr. Hirouchi first worked in a mouse model of acquired synucleinopathy — multiple system atrophy α-syn prions injected in to the brains of TgM83(+/-) mice, which are heterozygous for a SNCA A53T transgene [Prusiner 2015]. They quantified synuclein seeds in brain tissue using a cellular assay, and did histology to look at synuclein aggregates in the brain, and the kinetics of how both of these markers worsened over time marched in lockstep with plasma NfL level. The plasma NfL level could predict how long until the animals developed clinical disease.

They also looked at RML prion-infected wild-type (FVB) mice treated with IND24, a compound which by an unknown mechanism of action greatly increases survival time in these mice [Berry 2013, Giles 2015]. By serial sacrifice, you could see that IND24 delayed the accumulation of PrPSc in the brain. In parallel, IND24 also delayed the rise in plasma NfL concentration. Plasma NfL rose in untreated mice by about 60-75 dpi, but stayed low in IND24-treated mice for months longer. Most remarkably, even though the variance in time of onset in prion-inoculated mice is small to begin with, NfL was predictive of which mice were relatively earlier or later to become sick. The mice in which NfL rose a bit later were those that also survived longer. This mirrors the recent finding that various markers of neuronal damage, including total tau and NfL in plasma and CSF, are predictive of survival in sporadic CJD in humans [Staffaroni 2019]. 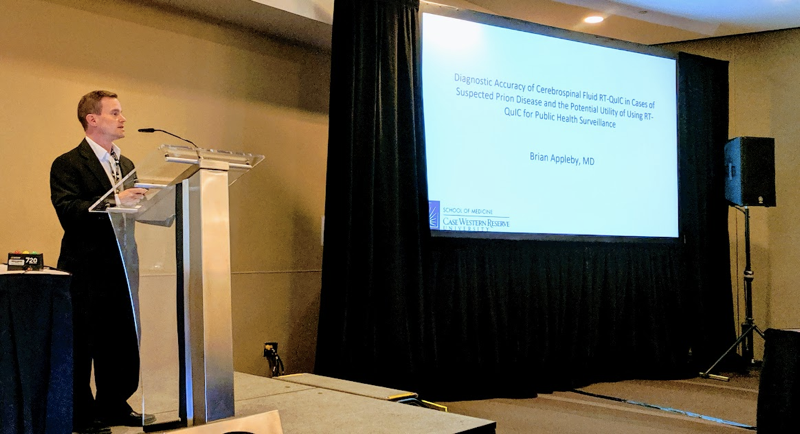 Dr. Appleby is director of the U.S. prion surveillance center and he spoke about the center’s evaluation of diagnostic tests for prion disease.

For RT-QuIC, the center recently published retrospective and prospective cohorts evaluating sensitivity and specificity for prion disease [Foutz 2017]. They have since launched a larger overall and autopsy-confirmed observational cohort study. As before, they used 2nd-generation CSF RT-QuIC [Orru 2015]. They used only the first CSF sample if multiple serial LPs were available. They received 10,498 CSF samples over 3 years, of which about 10% were RT-QuIC positive. Of 567 cases that went to autopsy they had 90.3% sensitivity and 98.5% specificity (the one false positive turned out to be multifactorial dementia with vascular and Alzheimer’s). Sensitivity was highest in MM1 sCJD, VV2 sCJD, and genetic CJD. VV1, sFI, and FFI were categorically negative; 2/3 VPSPr cases were positive.

Because the sensitivity is not perfect, a common question they get from referring clinicians is what other factors can be considered to rule in/out prion disease in cases that are RT-QuIC negative. False negatives (those with true prion disease but negative RT-QuIC) were more likely to be younger, male, had lower tau and 14-3-3 levels, and had longer survival both from onset to LP and from LP to death. The false negative samples were also more likely to not be clear and colorless CSF samples (indicating some degree of blood contamination).

The biggest study limitation is that the diagnostic accuracy is considered only on autopsied cases, so although the overall sample size is over 10,000, the sensitivity and specificity are calculated on less than a tenth of that number. There is also incomplete race/ethnicity and clinical data so they don’t know if any of those factors also affect the probability of false negatives.

Dr. Appleby also announced that Bob Will has officially retired and we won’t have the pleasure of his attendance at future prion meetings.

I gave a talk about my recent work using multiple reaction monitoring (MRM), a targeted mass spec assay, to quantify PrP in CSF [Minikel & Kuhn 2019]. You can click through the slides via SlideShare above, and I have uploaded PDFs of the slides and poster as well. I’ve previously blogged about this work here so I won’t repeat myself in this post. Come see my poster #219 at the conference if you have questions.

In the Q&A someone asked whether the different cleavage products of PrP might have different half-lives and if that could affect the readout. I said that is totally a possibility but that we don’t have a good way to ask that question. Brian Appleby asked how you could do a trial in symptomatic patients, if CSF PrP is already going down due to the disease process. I said one possibility is that you first do a dose-finding study in pre-symptomatic patients. You then take that dose into symptomatic patients, where you then have other tools — total tau, NfL, RT-QuIC, clinical outcomes — for measuring the effect of the drug on the disease process. Debbie McKenzie asked whether there is difficulty detecting the GENFTETDVK peptide due to N-linked glycosylation and therefore whether it is really true that all peptides behave the same. I clarified that all peptides behave the same in the sense that their relative abundance across diagnostic categories (prion vs. non-prion) is similar; but in absolute abundance, it is true that the GENFTETDVK peptide is lowest, presumably because we do not detect the glycosylated form.

I had to run out early and missed the last few talks but I’ll be back tomorrow. The Prion2019 abstracts are now online.