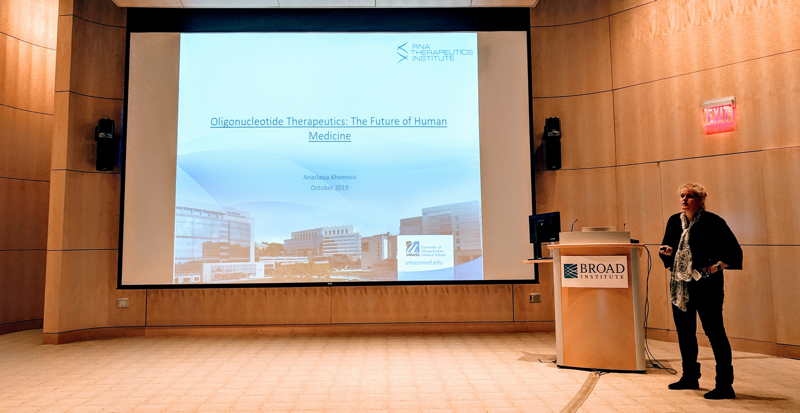 These are my notes from Dr. Anastasia Khvorova’s lecture at the Broad Institute’s New Therapeutic Modalities Workshop series on October 24, 2019.

Dr. Khvorova is a professor at the RNA Therapeutics Institute at UMass Medical School. Her talk was entitled “Oligonucleotide therapeutics: the future of human medicine”.

Dr. Khvorova began by making the case that oligonucleotide medicines are “informational drugs,” and that the (albeit partial) separation between their dianophore (sugar and backbone properties that largely determine pharmacokinetics) and pharmacophore (nucleotide sequence that largely determines pharmacodynamics, i.e. target) is an enormous asset [Khvorova & Watts 2017]. She went on to tell a bit of history, arguing that, like many other novel biotechnologies, RNAi drugs have experienced a “technology hype curve” over the past two decades, where the hope-to-hype ratio has inflected a couple of times: 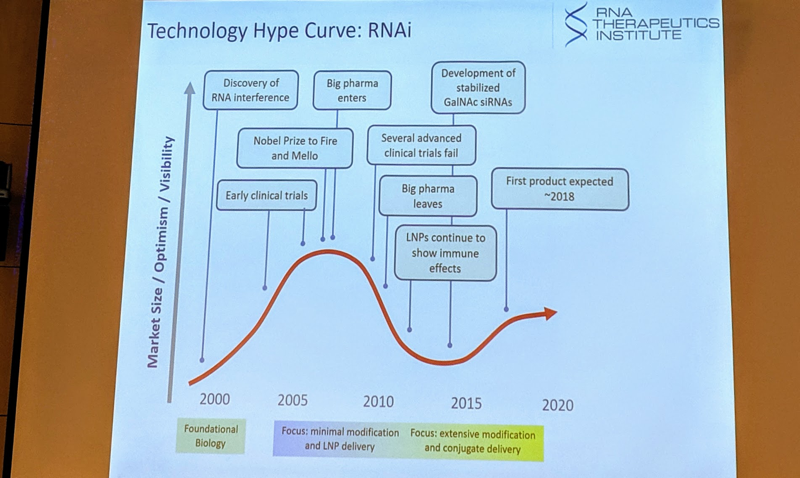 The first RNAi drug has now received FDA approval — Alnylam’s patisiran, targeting TTR. But Dr. Khvorova believes that what is really promising is the use of full chemical stabilization to improve the pharmacokinetics of RNAi therapeutics. Full chemical stabilization means the elimination of all unmodified ribose sugars, as well as modification of both ends of the oligo, and conjugation to support tissue uptake [Hassler 2018]. She pointed to the success of inclisiran against PCSK9 as an example of how chemical stabilization can enable an RNAi oligo to be dosed only every six months [Fitzgerald 2017, Khvorova 2017]. The rest of her entire talk today will focus on conjugated, fully chemically stabilized oligos, as she believes this is the only way to make a long-duration, potent RNAi drug. Her group and others have used various conjugates to support delivery to skeletal muscle [Khan 2016], neurons [Biscans 2018], and several other tissues and cell types [Osborn & Khvorova 2018, Biscans 2019]. This expands the applicability of the technology well beyond the liver, which is where unmodified siRNAs tend to end up.

Balancing tissue retention, distribution, and toxicity is a principal challenge. Some chemistries result in good distribution but poor retention, others result in excellent retention but only in a limited region [Alterman 2015, Nikan 2017]. Increased phosphorothiate content promotes cellular uptake but also correlates with certain toxicities. After playing with a large number of different permutations, they discovered that adding phosphorothioate modifications plus making the molecules divalent — i.e. two double-stranded shRNA molecules linked together — gave them optimal distribution, retention, stability, and potency [Alterman 2019]. They first discovered this with an oligo conjugated to Cy3 (a red dye), and the readout was very easy: after dosing mice and later collecting brains, they could see with the naked eye that the entire brain was pink, meaning that the compound had distributed very broadly throughout the brain and then stayed there. When they then used a sequence targeting HTT (non-allele-specific), they found that they could lower huntingtin protein below the limit of detection (estimated >99% knockdown) for about 6 months [Alterman 2019]. The mRNA knockdown was somewhat less, about 80%, apparently because some mRNA is retained in the nucleus as opposed to being cytosolic. They believe the knockdown of cytosolic mRNA is near-complete, hence why they observe undetectable protein levels.

Dr. Khvorova noted that huntingtin knockout is lethal in mice, and accordingly there are many people working on both allele-specific and non-allele-specific strategies for knocking down huntingtin. She argued that the bar for an allele-specific strategy being useful in vivo is rather high. Even if you can show in cell culture that there exists a one or two order of magnitude range of oligo concentrations in which you get good allele discrimination, the fact is that in patients, across brain regions and across timepoints post-dose (from peak to trough), there will be a wide range of drug concentrations, so depending what dose you choose, there may be times and places where you get potent silencing of both alleles, and/or times and places where you get little silencing of either allele — you need an extremely allele-selective drug in order to get allele specificity in all times and places.

What determines the distribution and clearance of oligonucleoties? CSF flow is relatively slow — for instance, an antisense oligo dosed by intrathecal injection takes about 8 hours to reach the tip of the brain. Therefore, a compound that is cleared quickly will be cleared before it ever has a chance to distribute. The di-siRNA molecules are much larger than unmodified siRNA or ASOs (around 27 kDa as opposed to 7 kDa), which seems to slow down their clearance from CSF, giving them time to distribute further and deeper. They find that 30-40% of the injected dose is retained in the CNS at 48 hours. Intracellular compartments, probably some type of endosomes, accumulate a reservoir of di-siRNA that is only gradually released into the active compartment, cytosol, where it can be RISC loaded and engage its target over weeks or months. At 1 month post-dose, they can detect 3-4% of the injected dose in the brain.

In humans, there are two potential routes for dosing an oligonucleotide drug into CSF: 1) bolus intrathecal injection, or 2) Ommaya reservoirs, implanted in the scalp with a catheter through the skull and into the ventricle, which are an FDA-approved device used for delivery of drugs such as chemotherapy for brain tumors. In non-human primates, they explored intracerebroventricular injection of di-siRNA as a delivery method and observed very widespread, very potent activity across the brain [Alterman 2019]. So far they have also done intrathecal delivery studies in sheep and observed similarly broad distribution. From the studies done so far in mice and non-human primates, the di-siRNAs seem to be very well-tolerated, with only transient impact on neuroinflammatory markers, and almost no off-target activity. For minimizing off-targets, it helps that exact matching in the “seed” region of siRNAs is essential for RNAi activity, so bioinformatic prediction of off-targets is relatively good for this technology.

Dr. Khvorova concluded by describing how the development pathway for oligonucleotide drugs is far quicker and more rational than for, say, small molecule drugs. Certainly, it is not trivial, and to develop an oligo drug you do need access to a large number of different capabilities ranging from bioinformatics to good manufacturing practices (GMP) manufacturing. Still, the hope is that this approach will greatly expand the number of currently incurable diseases for which therapies can be developed. Much of this work will be done in industry, but there is also a role for academia and non-profits to step up, particularly where “ultra-orphans” and even N-of-1 therapies [Kim 2019] are concerned.