This past week at Prion2013 I got to see David Berry and Kurt Giles‘ poster on 2-aminothiazoles as antiprion compounds.  The story of these compounds goes back a few years and surely ranks as the most rigorous, thorough testing of antiprion compounds that’s being done right now.  It’s full of exciting progress – and also important lessons for prion research. 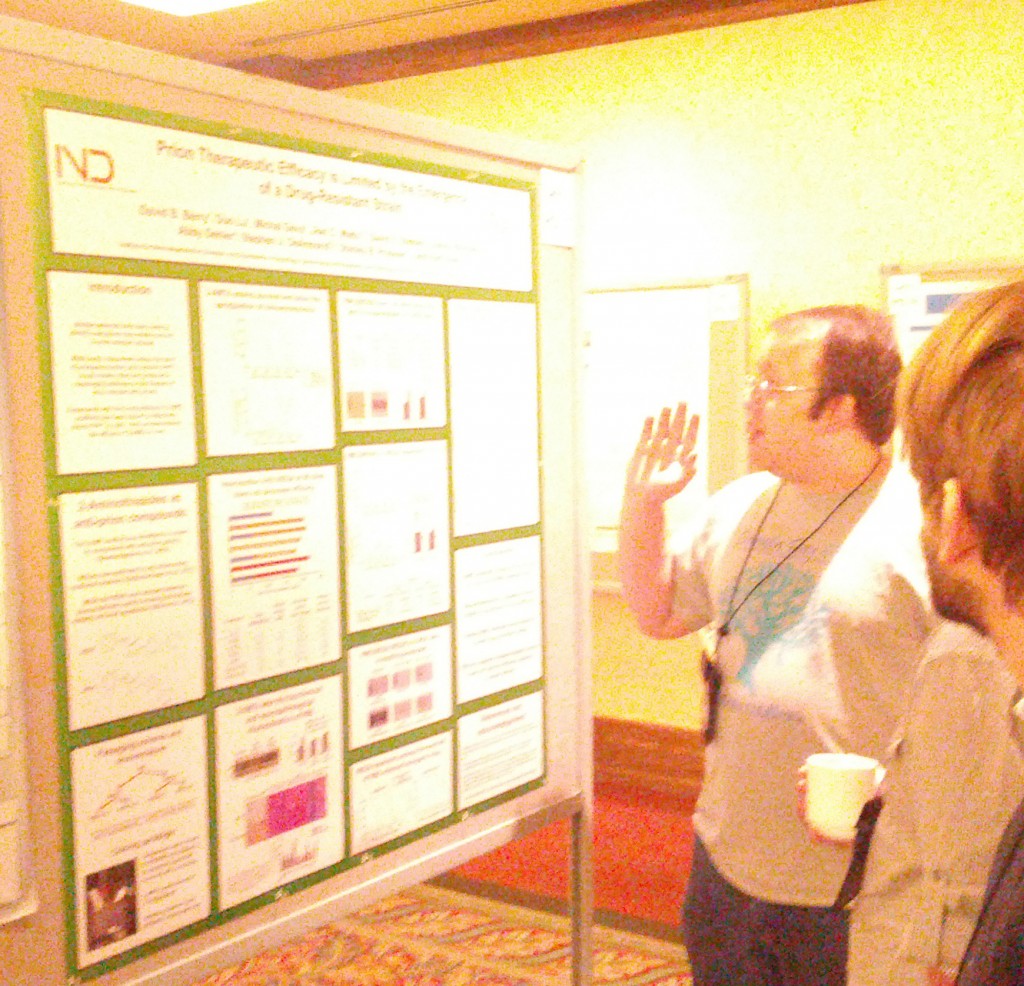 Above: David Berry explains his poster to hangers-on at Prion2013.

Prusiner and colleagues at UCSF first came across this class of compounds in a drug screen a few years ago – an ELISA assay for compounds that inhibit PrP-res formation in ScN2a cells [Ghaemmaghami 2010]. This assay produced a few hits, the most promising of which were the class of 2-aminothiazoles.  The term 2-aminothiazole simply refers to this heterocyclic ring with an S and 2 Ns:

And here it’s being used to refer to a class of compounds that have this group at the center, with aromatic moieties on either side  [Ghaemmaghami 2010, Fig 3]: 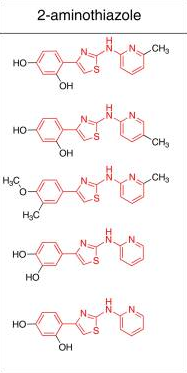 Sagely, Ghaemmaghami ended the paper with a word of warning: cell culture screens like the one that discovered these compounds have only limited ability to predict efficacy in vivo, for several reasons.  They don’t address blood-brain barrier penetrance, there’s no guarantee that the molecular species targeted in vitro is relevant to disease in vivo, and/or effects might be cell line-specific or prion strain-specific.

After lead compound discovery, the next step in drug development is the formulation of structure-activity relationships (SAR).  Building from the 2-aminothiazoles from the original screen, the folks at UCSF undertook a battery of screens and counterscreens with a wide range of 2-aminothiazole derivatives [Gallardo-Godoy 2011].  These confirmed that the compounds are not cytotoxic (so the reduced PrP-res seen in treated cells isn’t just because many cells died).  They also narrowed down the range of possible mechanisms of action: PrPC expression wasn’t reduced, and PrPSc wasn’t denatured by the compounds, so they must affect prion conversion.  They synthesized about 50 different compounds, permuting the rings on both sides of the core 2-aminothiazole group to reduce toxicity and increase blood-brain barrier permeability and efficacy.

The two winners from the SAR optimization work – dubbed IND24 and IND81 – next went into pharmacokinetics studies which were just published a few weeks ago [Silber 2013].  Pharmacokinetics is what the body does to a drug, and is often broken down into four categories called ADME:

Both IND24 and IND81 were orally bioavailable (A) and reached high concentrations in the brain (D), and were broken down slowly enough to have the chance to act therapeutically, while also not resulting in any obvious toxicity (M).  (E wasn’t especially addressed).  Based on these results, the two compounds were advanced to therapeutic trials in mice.

That brings us to today.  I was asked not to share any exact data from the poster on this blog, but the work is being written up and should be published in a few months.  Here’s a broad overview.

Both of these compounds showed remarkable antiprion efficacy in mice infected with the RML strain of scrapie.  Unprecedentedly, the extension of survival was about the same (on the order of 60 or 70%) regardless of whether the treatment started at 0 dpi or anywhere up to about 60 dpi (about half the way through the disease course), though efficacy did decline if the drug was administered later than that.  They also worked quite effectively against ME7 prions.

Many studies of prion therapeutics would have ended right there and been written up for publication.  But these researchers were remarkably thorough: they next asked why these compounds can only delay, and not prevent, prion-induced degeneration and death.  They discovered that brain homogenates from treated mice that reached terminal illness contained a new, drug-resistant strain of prion.  Presumably this strain arose out of random conformational mutations, or was present as a small fraction of the input RML preparation.  In any event, this new strain had different properties including a different glycoform ratio (see glycosylation post), and was not only resistant to IND24 and IND81, it was actually ‘dependent’ on them, in that it propagated faster in the presence of the drug than in its absence.  Even more surprisingly, it was also resistant to quinacrine and cpd-B, two potent in vitro inhibitors of prion conversion.

I asked Giles why the prions would come to be resistant to drugs they’d never seen before.  Obviously it’s hard to know an exact answer to that question – but he pointed out that the 2-aminothiazoles, quinacrine, and cpd-B are all flat, aromatic molecules, so perhaps a strain had been selected which was resistant to this whole category of small molecules.

And here’s the real kicker: in transgenic mice expressing human PrP and inoculated with human CJD brain homogenate, IND24 and IND81 did nothing.

Repeat: these small molecules, which were highly effective against rodent strains of scrapie, had no effect against CJD prions.

On reflection, none of this should be too surprising.  The phenomenon of strain selection and resulting drug resistance has become increasingly recognized and understood in the past four or so years [Ghaemmaghami & Ahn 2009, Ghaemmaghami 2011, Browning 2011, Oelschlegel & Weissmann 2013] and was a major topic of the talks at Prion2013.  And the few compounds that have actually been tested in vivo against more than one prion strain have almost always proven strain-specific in their efficacy [Adjou 1996, Doh-Ura 2004, Kawasaki 2007].

Screens for antiprion compounds almost invariably use RML prions, for the important and practical reason that there exists a reliably RML-infected cell culture model (ScN2a cells).  A human cell line stably propagating CJD or other human prions has never been achieved.  Regression to the mean suggests that compounds discovered by virtue of their efficacy against RML are likely to be somewhat less effective in other strains, but surprisingly, IND24 was reported to be highly effective against chronic wasting disease (CWD) prions.  The strain specificity of the 2-aminothiazoles appears to depend on protein conformation, not amino acid sequence, as the RML vs. CJD difference in efficacy was observed even when one mouse model (expressing chimeric Mo/HuPrP) was exposed to each strain.

Of course, it would be ideal if we could run drug screens in human cells and then validate hits in mice expressing HuPrP.  That’s not practical at the moment, mostly due to the lack of stably prion-infected human cell lines, but also in part because doing primary screening and in vivo validation on human prions, which many institutions treat as biosafety level 3, would be prohibitively expensive.  The exception to that would be assays in wild-type, uninfected human cells to deplete PrP, though that sort of assay has its own challenges which I’ll explore in a future post.

But Berry and Giles’ findings, far from being a cause for despair, are immensely hopeful.

Consider that in 2001, quinacrine moved straight from cell culture to human trials, and continued in human trials even after it failed in animal models again and again.  As of 2013, most researchers have accepted the lessons of quinacrine, pentosan polysulfate, cpd-B and doxycycline: would-be drugs must be tested in stringent models of prion disease (infected intracerebrally and treated orally or peripherally), against multiple strains, at multiple timepoints including late in the disease.  Thanks to the 2-aminothiazoles, we can add another requirement to the list: drugs should be validated in ‘humanized’ animal models.  The collective efforts of the past decade-plus haven’t given us a drug yet, but they have steered us onto the right track towards finding one.

The 2-aminothiazoles were but the first hit to come out of the Prusiner lab’s drug discovery operation.  They’ve set up a professional pharmaceutical operation there, from high-throughput screening to refinement to pharmacokinetics to validation in multiple animal models, and are poised to move forward on other candidate compounds.  In his keynote address, Dr. Stanely Prusiner flashed a quick graphic of current compound hits they’re chasing in his lab – they have about 20 compounds that exhibit antiprion activity at even lower concentrations than the 2-aminothiazoles.  Turning any of these into drugs won’t be trivial, but with lessons learned and a testing pipeline in place, it should be possible to figure out which of these are effective against human strains of prion diseases.  He implied that they won’t aim to start a clinical trial until they have a compound that works against human prion strains in vivo.  That’s a high hurdle, and it may mean we have years yet to wait – but it also means these people are serious about finding something that really works.