2-aminothiazoles, typified by lead IND24 (above), are a series of antiprion compounds to which the Prusiner lab has devoted years of effort. They were first discovered in a phenotypic screen for compounds that reduce the accumulation of proteinase K-resistant PrPSc in mouse neuroblastoma cells infected with RML prions (ScN2a cells) [Ghaemmaghami 2010], and after extensive medicinal chemistry optimization [Gallardo-Godoy 2011] and pharmacokinetic studeis [Silber 2013], they finally proceeded into in vivo efficacy studies. It was then that we learned, first at Prion2013 and then in the literature [Berry 2013] that at least two such compounds, including IND24, have the frustrating property that they extend life in mice infected with RML prions, but don’t appear to do anything at all in humanized mice infected with prions from sporadic CJD patients.

One possible interpretation of this saga is that you get what you screen for. Compounds selected for their activity against RML prions in cell culture sometimes really do inhibit RML prions in vivo — but may not work against the prion strains that kill humans. Such has since proven to be the case not only for 2-aminothiazoles, but also for cpd-b [Lu & Giles 2013] and for anle138b (see below). But this hard lesson wasn’t the only thing learned from the 2-aminothiazoles. Encouragingly, they showed (as did cpd-b [Kawasaki 2007]) that it’s feasible to treat prion disease with a small molecule, and that antiprion molecules do have real structure-activity relationships [Gallardo-Godoy 2011, Li 2013]. Less encouragingly, they also confirmed, as had been suggested earlier [Ghaemmaghami & Ahn 2009, Li 2010], that the evolution of drug resistance could, perhaps surprisingly, prove be a considerable challenge in antiprion drug development.

And now there are two more chapters in the story of the 2-aminothiazoles. While they still don’t work against any human prion strains, these molecules are continuing to offer what could be some of our first glimpses into the future of antiprion drug development.

The first new chapter is one I previously blogged about at Prion2015, now published as of a couple of weeks ago [Berry 2015]. There are a few surprises here. One is that IND24 was ineffective against either of two classical sheep scrapie isolates (SSBP/1 and CH1641), even though it was effective against mouse RML prions, which apparently were originally derived from SSBP/1 prions by passage into mice (cited to a long-lost Dickinson 1976 reference within [Berry 2015]). The other was that IND24 was surprisingly quite effective against two CWD prion isolates (one from elk and one from white-tailed deer), doubling survival time if administered from 1 day post-infection (dpi). Interestingly, they first did these experiments at a high dose of IND24 (210 mg/kg/day) but later backed off to a moderate dose (50 mg/kg/day) with no loss in efficacy. This foreshadows some surprising findings about dosing regimens against RML prions discussed further below. And encouragingly, they saw no evidence that CWD prions were capable of developing resistance to IND24 — prions from CWD-infected, IND24-treated mice remained sensitive to IND24 in cell culture, and retained their original transmission properties and glycoform ratios. This raises some hope that drug resistance may not be, after all, an inevitable feature of antiprion small molecules.

IND24 is probably unlikely to become a veterinary drug for CWD anytime soon, because it is not curative and, as David Berry pointed out at Prion2015, it’s not clear whether or not extending the asymptomatic (but still infectious) period in CWD-infected deer and elk would even be a desirable outcome. Dr. Berry nevertheless raised the interesting possibility of testing IND24 against CWD in deer or elk as a way of validating the drug development model, wherein it is assumed that transgenic mice expressing elk PrP and infected with elk CWD actually serve to model CWD in elk. It occurs to me that among other things, this could help answer some questions about how improvements in survival would translate from mice to larger, longer-lived animals. Imagine that we one day have a molecule in hand that extends survival in human prion-infected humanized mice from 200 days to 400 days. Would we expect that the difference in survival (+200 days) or the multiplier (2x) would be the more relevant predictor of efficacy in humans? An IND24 trial in elk or deer might provide a glimpse of an answer to this question. On the other hand, such a trial would take years and would be quite a lot of money to spend on a molecule that isn’t expected to become even a veterinary drug, let alone a human one. So who knows whether it will ever happen.

The second new chapter for 2-aminothiazoles is practically a book unto itself, an incredible amount of data from (I count) a total of 67 in vivo experiments, all condensed into one paper [Giles 2015]. These experiments vary the dose, the dosing regimen, the mouse model, the prion strain, and the particular 2-aminothiazole molecule being used to treat prion disease in mice.

I’ll start with the new 2-aminothiazoles. The paper contains in vivo data from IND24 plus several new molecules, some of which were previously described [Li 2013] but hadn’t been tested in vivo. Three of the newly considered molecules represent a fusion of IND24 and cpd-b: 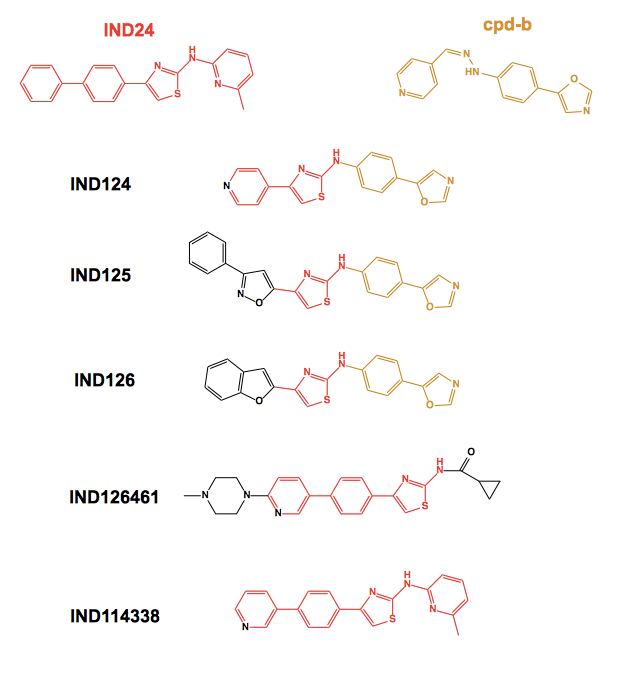 All of these new molecules were subjected to pharmacokinetic studies, and the latter four were tested for efficacy against RML prion infection in mice. Each of the four showed some efficacy, conferring increases in survival time of at least +20%. The least effective molecules, IND126 and IND126461, were those with by far the worst pharmacokinetics, and IND124 (top), which had even worse pharmacokinetics, was accordingly not even tested in vivo.

With that caveat borne in mind, it is interesting to compare the effects of the timepoint of intervention for IND24 versus cpd-b and anle138b: 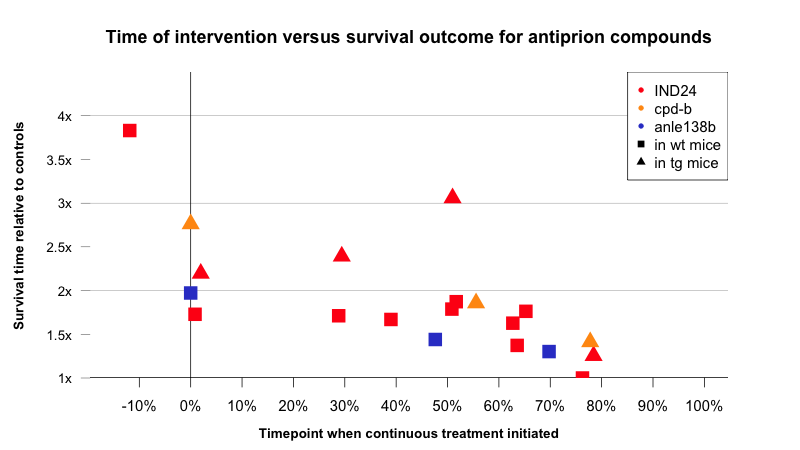 Above: comparison of survival data according to timepoint when continuous treatment was initiated. Data from [Giles 2015, Kawasaki 2007, Wagner 2013]. See data, code on GitHub.

Strangely, IND24 seems to get more effective the later it is administered in transgenic overexpressers, at least up to a point (red triangles), while in wild-type mice, the survival improvement holds steady in the range of +60% to +75% until dropping off sharply to zero at about 75% of the way through the disease course. The earliest that any neurological symptoms have ever been observed in a prion-infected mouse is about 67% of the way through the disease course [Mallucci 2007] and there is little evidence for any of these compounds being effective very far beyond that mark. That’s consistent with the notion that these compounds block prion replication, and that once neurotoxicity begins, prions are no longer replicating anyway [Prusiner 1982, Sandberg 2011, Sandberg 2014].

That suggests that even if analogous compounds could be developed that are effective against human prion replication, they might have limited efficacy against prion disease at the symptomatic stage, i.e. sporadic CJD. But perhaps what’s most promising about this plot is the action at the far left: when given prophylactically, IND24 nearly quadrupled the incubation time of RML prions. That’s perhaps not surprising — we already knew that prophylactic drug administration had an outsize effect for periphrally acquired prion disease in mice (see for instance porphyrins and phthalocyanines [Priola 2000]), so one might have expected this similar boost in effect size when treating intracerebral infections. Still, this finding bodes well for the potential to treat genetic prion disease in humans before symptoms begin.

Perhaps more surprising is the effect of varied doses and dosing regimens using IND24. I mentioned earlier that with CWD prions (which do not seem to develop drug resistance) they found that doses of 50 or 210 mg/kg/day gave similar effects [Berry 2015]. Against RML prions, where drug resistance is known to occur [Berry 2013], IND24 was actually much more effective at a 50 mg/kg/day dose than at a 210 mg/kg/day dose. Equally surprising, IND24 was more effective in an intermittent dosing regimen — 60 day on/off cycles, starting with on — than under continuous dosing. One can speculate that both of these phenomena might be due to drug resistance: perhaps lower doses and/or intermittent treatment keep the IND24-sensitive and IND24-resistant prion strains in competition with one another.

Is the increased power for lower doses and intermittent dosing a wholly unique feature of prion diseases, or is there any precedent for such a finding? Plenty of chemotherapy drugs are given in intermittent doses, but that’s usually just to give the patient a break from their extreme toxicity rather than because it actually increases efficacy. And in some infectious diseases, continuous dosing is considered essential to avoid resistance — for instance, the practice of “directly observed therapy” (watching to make sure patients take their meds) is recommended to reduce drug resistance rates in tuberculosis [Weis 1994], though apparently this continues to be a subject of debate [Moonan 2011, Pasipanodya & Gumbo 2013]. I Googled and found one recent paper suggesting that, in the context of melanoma, intermittent dosing of the targeted cancer therapy vemurafenib might be more effective than continuous dosing [Das Thakur 2013]. I also remembered that in a lecture I attended last semester, Dr. Leonard Sicilian stated that antibiotics for cystic fibrosis patients are sometimes given in on/off regimens to slow the development of antibiotic resistance. So perhaps the idea of intermittent dosing for improved efficacy is not entirely unprecedented. But it still seems like a striking feature of prion disease.

The bad news, of course, is that none of the new 2-aminothiazoles were effective against human prions. Specifically, four of them were tested against MM1 sCJD prions in the Tg1014 mouse model, and none increased survival. The authors also tested anle138b against the same MM1 sCJD prions in the same mouse, and saw no increase in survival there either.

That’s certainly a disappointing outcome. But the main message I take from this paper is a positive one. High-throughput screening and medicinal chemistry studies in cell culture can indeed yield antiprion small molecules that work remarkably well in vivo. So treating prion disease with a small molecule isn’t fundamentally impossible, we just need the right model for studying human prions. Moreover, there may be a lot of room to tweak doses and dosing regimens to improve efficacy. And for those who know their at-risk genetic status decades in advance, early intervention might be really effective in delaying onset of disease.